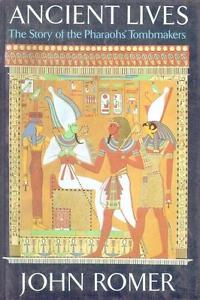 This book is written from the thousands of unique documents that survive from the ancient community of Deir El Medinah, the builders of the tombs in the Valley of the Kings. The story is crafted to reveal a community of privilege who's members are at once orderly and human highly respected and high spirited.


The documents used to tell their lives bring surprising sharp images of the people and their mastery of their craft creating tombs for pharaohs and their courts. A literate class who's confined lives were not always easy but are well expressed by Mr. Romer.


The tensions within the closely confined community are expected and an opposing party tells of a robbery occurring in the tomb of the pharaoh Seti II with objects stolen and a drunken worker even sitting on the sarcophagus of the king during burial while the king's mummy lay within. Vicious accusations from one family to another in order to gain prestige away from another within the confines of their small community


Ultimately the tomb builders fates lay with the kings who courts left the holy city of Thebes and the powerful priests of Amun to move farther away in the delta, the workers finding themselves beholden to the interests a much wider bureaucracy while a series of short reigning kings gradually lost interest and forgot the royal tomb builders.


By the last of the Rammeside pharaohs, a succession of weak kings and crop failures cause in a short period for the society of the holy city and the sacred necropolis' to be robbed of their valuable furnishings. The tomb builders become the tomb robbers till the inhabitants are no longer safe or being fed in their isolated village and the people move away and the tomb builders families and descendants simply vanish from recorded history.


This is one of those books where I found myself saying wow, again and again, it takes a few chapters to get into the complexities of the village life and its inhabitants but once in the reader becomes hooked the book becomes hard to put down.


Truly "Ancient lives" is John Romer's masterpiece and one of the finest compositions I have read in years.
Posted by Timothy Reid at 3:06:00 PM