This is an article on a mysterious object found in the tomb of the 18th dynasty royal architect Kha who's tomb was found intact in 1906 at Deir el Medina in the cemetery of the workman's village who carved and decorated "The Valley of Kings.

The beautifully carved 3400 year old object is being proposed by a scientist to be the oldest known protractor. There is debate about this but the argument is interesting as is the picture of the object shown.
Posted by Timothy Reid at 3:26:00 PM No comments:

The Death of a King Ever since the butchered remains of the mummy of king Sequenenre II was unrolled on June 9, 1886 by Gaston Maspero the mummy has been a strong subject for archaeologists to see the results of wounds inflicted by a number of ancient weapons.

Sequenenre the prince of Thebes declared war upon the foreign ruler of Egypt the Hyksos king Apophis after a threat was sent to Sequenenre by Apophis who complained that the snoring of the hippopotamus' in the sacred lake was keeping Apophis awake. Apophis at his capital of Avaris in the delta was much to far away to hear the hippo's snoring instead Apophis was telling Sequenenre that he knew the prince of Thebes was conspiring with others to overthrow him.

Within a few years in about 1560 bc. Sequenenre was dead assassinated by two or more assailants with there being some evidence that the king may have received four of his five head wounds while he was lying on the ground unconscious after the first blow to his head. From his head wounds it can be surmised that at least two or more weapons were used including an axe, a spear, possibly a sword and a blunt object maybe the but end of the axe.

To Sequenenre's credit he acquired the moniker of Sequenenre the Brave with his descendants driving the foreign kings out of Egypt and the prince's of Thebes became kings of Upper and Lower Egypt.
Posted by Timothy Reid at 2:23:00 PM No comments:

Here we have a short video from the Valley of Queens in the tomb of Nefertari wife of Ramses II. The black and white film gives the tomb a bit of a dark eerie feel.

My Support to the Egyptian People

Allot of things are going on in Egypt these days including in the antiquities portfolio who's minister Dr. Zahi Hawass has apparently resigned though a major reshuffling of government ministers is taking place to answer protest which are taking place. The minister Dr. Hawass was chased through the streets by angry archaeologists who want a chance to practice their chosen profession.

Dr. Hawass will hopefully move on with his life either in retirement or by going abroad to work for any number of museums that may want him, having said that I do not think the doctor will be dropping off a resume in Berlin.

I want to extend my support to the Egyptian people during this time of revolution and pray that the peoples courage brings prosperity, more freedoms and a brighter future for their children.

The Destruction of a Temple Monument 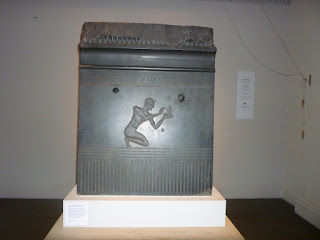 This slab is one of five known examples which may have once been a screen wall in a temple though the location of that temple is vague. The slab was found reused in Alexandria and appears to be one of the British Museum's earliest Egyptian objects entered in its collection as a gift of King George III in 1766, (EA22).

When I saw the slab in the "Eternal Egypt" exhibition at the Royal British Columbia Museum it was a gorgeous object and the wall must have been a remarkable site in whichever temple it once stood. On the more damaged side is a crude inscription in Greek relating to a restoration in the Roman period.(1a)

Three of these slabs are inscribed for the first king of the 30th Dynasty King Nectanebo I and two are inscribed for earlier kings of the 26th Dynasty including the first king of the dynasty Psamtik I and Psamtik II.(2) On the British Museum's slab the decoration of the more damaged side includes an offering scene with the king kneeling before a god and to the right another standing god belonging to another part of an offering scene the completion of the scene belonging on an adjoining block.

The cornices on both sides have been attacked with a chisel the cornice on the better-preserved side shows a row of frontal facing falcons, the feet of which still are present. On the more damaged side, there is little sign of the cornice except that the slab in Vienna(213), dedicated to Psamtik II shows a row of erect cobras (3). The Vienna slab cornice goes around one end of the stone indicating this slab was the beginning or end of the wall with no further elements at that end.


The inscriptions of the blocks indicate the wall might have been erected at Sais in the delta, ancient Heliopolis.  The Vienna stone differs from the later Nectanebo slab in that King Psamtik is shown in a much more prostrate position with both legs showing and side view of both feet while the British museum's slab shows King Nectanebo with only one leg and more than one toe.

At least part of the monument was present at the beginning of Egypt's 26th Dynasty and in good enough condition 300 years later for Nectanebo I to have his name inscribed on some of the slabs. The wall may have become badly damaged in the earthquake of 27 BC which destroyed the remains of the mortuary temple of Amenhotep III or in the 365 AD earthquake(4) which destroyed much of Alexandria after which the rough largely illegible(1b), heretic inscription on the British Museum slab may have been hacked into the top of the slab during the reuse of the block.

When the drilled holes were added to the blocks is not known but may well indicate a further reuse after the Roman period. Since the block was found at Alexandria it may indicate the stone was taken to that city after the 365 AD earthquake to be reused in the rebuilding of Alexandria and thus eventually found there.

Perhaps someday more of the stone slabs in the wall will turn up and tell us more about what happened to the wall in between Psamtik II and Nectanebo I and hopefully why and when the beautiful wall was dismantled and used as filler in a later construction.


1(a,b). Many thanks to Elizabeth R. O'Connell Assistant Keeper (curator) Roman and late Antique Egypt at the British Museum for her help in the interpretation of the text.
2. Eternal Egypt: Masterworks of Ancient Art From The British Museum, Edna R. Russmann, 2001, #134 pgs. 244-247
3. Global Egyptian Museum
4. Timelines: Earthquakes

Photo Courtesy of Michael Harding
Posted by Timothy Reid at 8:08:00 PM No comments:

United states authorities have broken up a smuggling ring which involved a dealer in Dubai and a Greco-Roman sarcophagus. Federal agents found the sarcophagus in Manhattan antiques dealers Virginia home.

Five Best Books for a Hot Summer or a Cold Winter, depending! 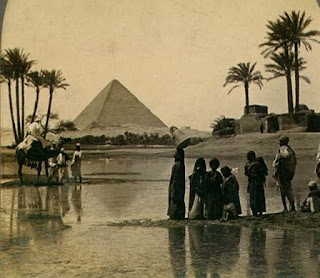 I picked these five books because they will all be fairly easy to obtain and included the two extra books because they belong in my top five but will be more difficult to find.
1. Ancient Lives: The Story of Pharaohs' Tombmakers
2. Ancient Egypt; The Great Discoveries
3. Tutankhamun: The Untold Story
4. Unwrapping a Mummy
5. Archaic Egypt

A. Pyramids and Progress
B. Egypt by H.H. Powers

The last being particularly funny!
Posted by Timothy Reid at 5:10:00 PM No comments:

Archaeologists working on behalf of the Egyptian Supreme Council of Antiquities have discovered the remains of a Roman period basilica built over a Ptolemaic building. Some images of Isis and Serapis were found during excavation.
Posted by Timothy Reid at 11:40:00 AM No comments:

Burial Chamber of Ramses IX in Valley of Kings

Here we have a short interesting video taken in the burial chamber of Ramses IX In the valley of kings. The tomb was visited as early as 1737-1738 by Richard Pococke though it has been open since antiquity. 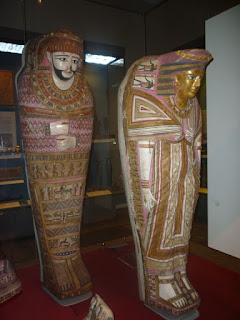 Here we have two coffins from a group of coffins found in a family tomb at Akhmim, Egypt and acquired for the British museum by Wallace Budge between 1897-98. The museum appears to have seven members of the family though the actual bodies were left in Egypt and based on the inscriptions dates the coffins to the Roman period, 50 bc - 50 Ad.

I must also point out that I have a 1965 Chicago Natural History museum publication titled " Mummies" at the back of the publication presented in Plate 8 another female mummy case which belongs to the same period and stylistically perhaps the same tomb, though the picture is black and white?

After a ton of work, Andrea Byrnes of Egyptology News and Kate Phizackerley from News from the Valley of the Kings have published their first free online magazine Egyptological Vol. 1. The magazine includes a number of interesting articles including one by Barbara O'Neill on Egyptian mirrors.
Posted by Timothy Reid at 5:36:00 PM No comments: