A Wonderful Collection of Amarna Talatats 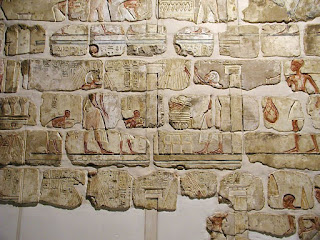 Though this article is on a show of art in general from the collection of the Metropolitan Museum of Art I put it here because it talks about the Norbert Schimmel collection of Amarna period talatats.

Schimmel acquired dozens of these sculpted blocks and donated to the Met a couple of dozens. Unfortunately, the underground storage area in Egypt where the talatats were stored had been broken into many years ago with hundreds of such panels stolen.

Dr. Hawass has not yet to my knowledge asked for them back but will he?

The above picture of talatats are from the Gem paaten at Karnak and not the talatats in concern.

This article is on the evolution of malaria starting with two Egyptian mummies and a pair of skeletons.

The British Museum in the Sudan

Here is another article on the salvage taking place in the Sudan before the area becomes flooded by a new dam.

A very short article with a nice picture of the mummy's Ptolemaic mask.

Seattle's only Egyptian mummy is Nellie, a 2000-year-old beauty! This article comes with some impressive pictures.

A Return of the King

Amenhotep III's stolen eye has arrived back in Egypt after 36-yearar long journey abroad. The eye was chipped off a statue of the pharaoh during a fire at the Luxor temple.
Posted by Timothy Reid at 5:28:00 PM No comments:

The Worship of Bastet

Here is an article by Dr. Zahi Hawass about the cat Goddess Bastet.

http://www.guardians.net/hawass/articles/bastet.htm
Posted by Timothy Reid at 11:46:00 AM No comments:

The Tomb of Userhat TT56

Another wonderful tomb from Osirisnet.

A story on a second century astrologist living in Alexandria.

http://djeserkara-felines.blogspot.com/2008/07/cat-in-ancient-egypt.html
Posted by Timothy Reid at 1:19:00 PM No comments:

Tombs of the Kings of the First Dynasty

Here is an article on the burial of the kings of Egypt's first dynasty the article mentions the sacrifices of those kings courtiers to serve them in the afterlife.

http://ngm.nationalgeographic.com/ngm/0504/feature7/index.html
Posted by Timothy Reid at 11:22:00 AM No comments:

The ever ambitious Dr. Zahi Hawass is a colorful man who's enthusiasm for his job as the secretary-general of Egypt's Supreme council of antiquities gives the good doctor full liberties as to Egypt's monuments and how they are to be interpreted during his reign. I say reign as the doctor has a habit of acting more like Egypt's dictator Hosni Mubarek than the man of science he is supposed to be.

A few years ago I watched as Dr. Hawass did a TV show in which he had a stone sarcophagus opened and in front of the cameras began rifling the contents for something to show the camera it was very unscientific and hardly professional.

Last year in 2007 Dr. Hawass made another TV show "Secrets of Egypt's lost Queen" in which a number of obvious errors in judgment and material occurred. It was a minor error that Dr. Hawass as well as the staff at the Cairo Egyptian museum were unable to recognize that one of the mummies in the show was not who they were claiming she was while a graphic displaying two female mummies with a box inscribed for Hatshepsut laying between them in the tomb DB320 was a little more devious as a mistake (there is no record recording the position of these objects in the tomb).

In this show which should have been called "Secrets of Egypt's lost King" as was Hatshepsut's most important title the female pharaoh was identified by Dr. Hawass by a broken tooth and a number of publications followed all extolling the new discovery.

More than a year later Dr. Hawass's discovery of the mummy of Hatshepsut has not had his results independently verified. Dr. Hawass should not make claims that he cannot or does not want to back up. Egyptian antiquities protocol is probably being used not to verify as Egypt's mummies are to be examined now by Egyptians only.

In the fall 2008 issue of KMT a letter to the editor points out that the so-called tooth evidence is more than likely wrong. The tooth displayed has two roots when being the upper molar it should have three? If he did find the mummy of Egypt's greatest female King than he should be more than proud to prove it otherwise he is wasting his new labs time and misleading the Egyptological community.

Dr. Hawass's most recent "no free lunch" campaign has the doctor telling everyone who will listen that Egypt received no money for its 1976 tour of King Tutankhamen's treasures. This is not true as Egypt made millions of dollars off the revenues of the show.

The secretary general is a sincere scholar who colors his words and sees what supports his view of things and hopefully in the future will stop saying things which are untrue and have his discoveries properly verified even if he feels his discoveries are above common scholars and scientists to doubt.
Posted by Timothy Reid at 1:58:00 PM No comments:

Dr. Hawass Will Say Anything

This article deals with the King Tut exhibition coming to San Francisco and the quote from Dr. Zahi Hawass who claims Egypt received nothing for its 1976 show. The article claims Egypt actually received millions.

http://www.artnet.com/magazineus/features/hoving/hoving10-16-08.asp
Posted by Timothy Reid at 1:55:00 PM No comments:

An article on Abydos and its restoration by reclaiming the site from habitation. It always amazes me how a site so sacred stopped being and by the time the ancients stopped worship at the site it must have been completely polluted.

England in the Sudan

Excavations in the Sudan have brought more marvelous treasure from the Kushite kingdom that ruled Egypt between 720-660bce.

http://www.telegraph.co.uk/news/worldnews/africaandindianocean/sudan/3209644/Ancient-Egypt-had-powerful-Sudan-rival-British-Museum-dig-shows.html
Posted by Timothy Reid at 1:35:00 PM No comments:

This is an interesting article from the good doctor however his conclusion is not backed up by his find.

http://www.guardians.net/hawass/articles/tut_akhenaten.htm
Posted by Timothy Reid at 11:58:00 AM No comments:

Dr. Hawass's Dig in the Valley of the Kings

In the Valley of the Kings, Dr. Hawass is excavating two promising sites. Good luck to him and his team hopefully he will find something interesting and not another garbage filled room, like Kv63.

http://www.guardians.net/hawass/articles/adventures_vok_2.htm
Posted by Timothy Reid at 11:54:00 AM No comments:

Lectures at the Royal Ontario Museum

Charles Currelly collected thousands of Egyptian objects for the Royal Ontario Museum amongst other things Mr. Curlley's assistance to Edouard Naville's excavation of the temple of Mentuhotep II brought to Toronto wooden models from that king's tomb.

Sounds like a terrific resource I can only hope it is.

http://dlib.etc.ucla.edu/projects/Karnak/
Posted by Timothy Reid at 9:01:00 PM No comments:

Here we have an article by the ever bubbly Dr. Salima Ikram who's enthusiasm is contagious.

http://www.archaeology.org/0811/abstracts/egypt.html
Posted by Timothy Reid at 8:58:00 PM No comments:

There is a fine paper by Laura Young on the subject.

http://lootingmatters.blogspot.com/2008/10/st-louis-art-museum-and-cultural.html
Posted by Timothy Reid at 10:04:00 PM No comments:

Another case of an object stolen being returned to Egypt. This would not happen so often if the antiquities laws were loosened to allow some antiquities to be released and sold abroad. Each fashionable burial would have contained 401 of these ushabti's.

http://www.africanecho.co.uk/africanechonews13-sept19.shtml
Posted by Timothy Reid at 9:05:00 PM No comments: