Luxor times is running a demand for an apology to the British couple who were caught taking a pile of cheap trinkets through Luxor airport. Luxor Times has come to the defense of the couple who have been probably already convicted in the public eye.

The couple has been released from custody and an investigation has begun. Even I could tell by the picture that many of the objects pictured were clearly tacky souvenirs. No doubt the investigation will cost a fortune and people visiting Egypt may want to avoid buying souvenirs that they can buy just as easily back at home.
Posted by Timothy Reid at 5:19:00 PM 1 comment:

The big news in Egyptology today is the excavation and restoration of King Khufu's second boat which was found in a pit next to that king's famous pyramid at Giza. The boat may well have been left protected where it lay for more than forty-five centuries to be left in reserve in the case and for when the already assembled boat is destroyed.

I cannot help but remember the two barges created for the Roman Emperor Caligula-like the one recreated above, these ships were floated on the sacred lake Nemi. The Nemi ships were built in the first century AD and are believed to have been floating palaces for the Emperor including marble floors and technological advances. 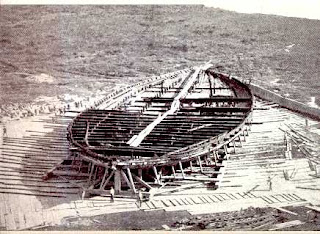 Fishermen long knew that the barges were at the bottom of the lake but it was in 1927 that Benito Mussolini ordered the ships recovered, this was made successful by draining the lake. The ships were set up in a museum built to house them but both were burned and destroyed in the Second World War.

A troubled and economically fragile country like Egypt is playing with fire by excavating and putting on display the second of King Khufu's boats. It is a perfect example of misguided intellectualism looking for a paycheck off a fragile and perishable antiquity and completely in keeping with Egypt's Supreme Council of Antiquities and its inability to properly manage Egypt's cultural heritage.

In the last year and a half an important library set up by Napoleon was burned and the Cairo museum was robbed with dozens of pieces of which many are still missing including wooden shabti belonging to the nobleman Yuya which themselves may have met the fires in Tahrir square when common sense came too and those who stole may have realized that possession of them would more than likely result in dozens of years in prison.(1)

These short-sighted people who are glorifying their work on the ship do not have any vision of what the next 20 years and beyond will hold in the tumultuous Middle East including Egypt. The project to excavate the ship is held up as science and this so called science will inevitably result in the loss of the subject.

Now that the pit is open perhaps a better plan will be to restore the ships elements, repack and reseal the pit to protect it for those Egyptian's who will live in a distant time in the future and only be seen again at the appropriate time when it's counterpart has been destroyed.

Too bad Italy's former dictator Mussolini and Egypt's Supreme Council of Antiquities have this archaeology in common and have both been unable to see the wisdom of leaving one of their ships where it had been safe for thousands of years. 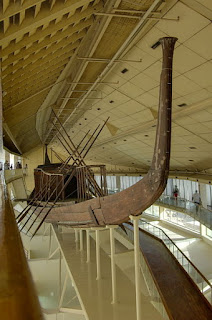 Update on damage created to the second boat during excavation in August 2017
Posted by Timothy Reid at 1:02:00 PM No comments: 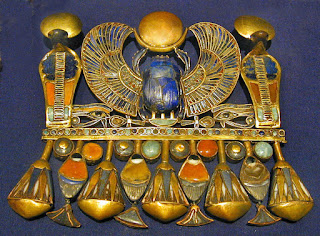 Here is an article on the discovery of Tutankhamun in the Valley of Kings in 1922 and in particular the opening of the boy kings burial chamber on this day 89 years ago. The article is a familiar story involving a most famous cast of Egyptologists.

The article goes on to mention the return in recent years from the Metropolitan Museum of Art in New York 19 pieces from the tomb.

Photo: Dalbera
Posted by Timothy Reid at 3:36:00 PM No comments:

Animal Mummies and a Mysterious Statue

This past summer a team of archaeologists led by professor Mary-Ann Pouls Wegner of the University of Toronto found the tomb of a priest at Abydos and temple storerooms including the discovery of 85 animal mummies. The mummies appear to be mostly dogs though there were also cats and other animals which were sacrificed and packed tightly in the small chamber. At some point a robbery occurred in which the mummies were disturbed and fell apart.

Also nearby in the next door chamber was the half rotted statue of a king. After cleaning encrusted mud and termite droppings off the statue it was found to have a narrow waist which some wish to believe that it represents the female ruler Hatshepsut. If so it would be the only known wooden statue of Hatshepsut though will be hard to prove.

The tomb is that of a priest with a name which involves the goddess Isis. The tomb contained shabti's and human remains.