Countless generations found their debt belonging to the ancient aristocracy for creating tombs most of the people could not afford however the owner is dead and depending on reverences the grave fell into disuse within a generation or two with its reuse only a matter of practicality.

By the end of the 6th Dynasty and again the 20th Dynasty the sacred burial grounds were teaming with not forgotten deposits of treasure with these past elites leading the way with fancy monuments but whether it was the grandsons and great grandsons of the parlours who dug up their own it would be most practical for the priests who forefathers buried the lord to have their sons undue the work.

The enthusiasm of the workers who are placed in charge of the dis-assembly of the sacred necropolis's and their sacred objects appear in the time of Piankh from a letter in the British Museum to be an extremely important events with King Piankh saying in his letter that the tomb found should remain sealed until he can get there.

Rulers like Herihor and Pinudgem I relished their positions within the reorganizing of the sacred vaults particularly in the royal valleys. Both men wanted to be associated with their handling's of the kings but what became of those harems of the individual rulers their are large amounts of queens burials and mummies now missing perhaps as the unfortunate result of placement during the reorganization at the beginning of the 21rst Dynasty.

The same too may be the natural response of priests at the fall of the Old Kingdom back at the end of the 6th Dynasty. It is not unreasonable that the priests of Giza and Saqqara may have also rounded the royal mummies together for safe keeping and to relieve the noble corpse of their possessions.

This activity probably reached its zenith during the reign of the Tanite King Psussenes I after this recycling high the slow descent began. A society dependent upon destroying the art created by their ancestors for those who they venerate they now destroy their legacy for gold.

The following generations of necropolis officials must certainly have faced the sacrilege of what they were doing as the pickings became slimmer and slimmer and the son's job not nearly so. The restoration of the necropolis's created generational occupations of destruction.

When DB 358 was discovered the tombs original occupant Meryetamen had been robbed of all her valuables including 3 of her alabaster canopic jars? The tomb is probably the finest restoration of a mummy that has come down to this day. Many hours were spent by workers in the uncomfortable environment beautifully re wrapping the mummy covering it in garlands even painting Meryetamen's two surviving coffins.

One wonders how "official" the robbery of the Queens tomb was and what role Meryetamen's riches played in King Herihor's Renaissance.
Posted by Timothy Reid at 8:31:00 PM No comments:

Bolton museum wishes to put on display the fake Amarna princess which is in police custody. The statue was purchased for L440 000.

http://www.independent.co.uk/news/uk/home-news/duped-council-hopes-to-display-fake-statue-1518727.html
Posted by Timothy Reid at 1:12:00 PM No comments:

A pier used during the dry season at the Karnak temple complex has recently been identified.

http://af.reuters.com/article/topNews/idAFJOE50P0PQ20090126?feedType=RSS&feedName=topNews
Posted by Timothy Reid at 4:20:00 PM No comments:

Here is Brooklyn's dig diary at the Temple of Mut.

http://www.brooklynmuseum.org/community/blogosphere/bloggers/2009/01/23/our-first-week/
Posted by Timothy Reid at 11:28:00 AM No comments:

Here we have the John Hopkins Temple of Mut dig diary.

http://luxor-news.blogspot.com/2009/01/mummfication-museum-lecture-look-into.html
Posted by Timothy Reid at 12:19:00 PM No comments:

Here is Archaeological magazines Hierankonpolis dig diary with lots of great pictures of the enclosure of the 2nd Dynasty King Kasekhemwy.

http://www.archaeology.org/interactive/hierakonpolis/field08/2.html
Posted by Timothy Reid at 11:27:00 PM No comments:

New Discovery in Valley of the Kings

A painted eye has been found which some think may have come from a new tomb or may come from one of the numerous shrines in the surrounding hills.

Bulgaria Say's No to Extradition

The Lebanese dealer convicted in absentia in Egypt for smuggling will not be handed over to Egyptian authorities.

Here we have a lecture by the always charming and interesting Dr. Ikram on the North Kharga Survey.

http://luxor-news.blogspot.com/2009/01/mummfication-museum-lecture-north.html
Posted by Timothy Reid at 10:08:00 AM No comments:

The Valley of the Kings by Otto Neubert, ca.1957 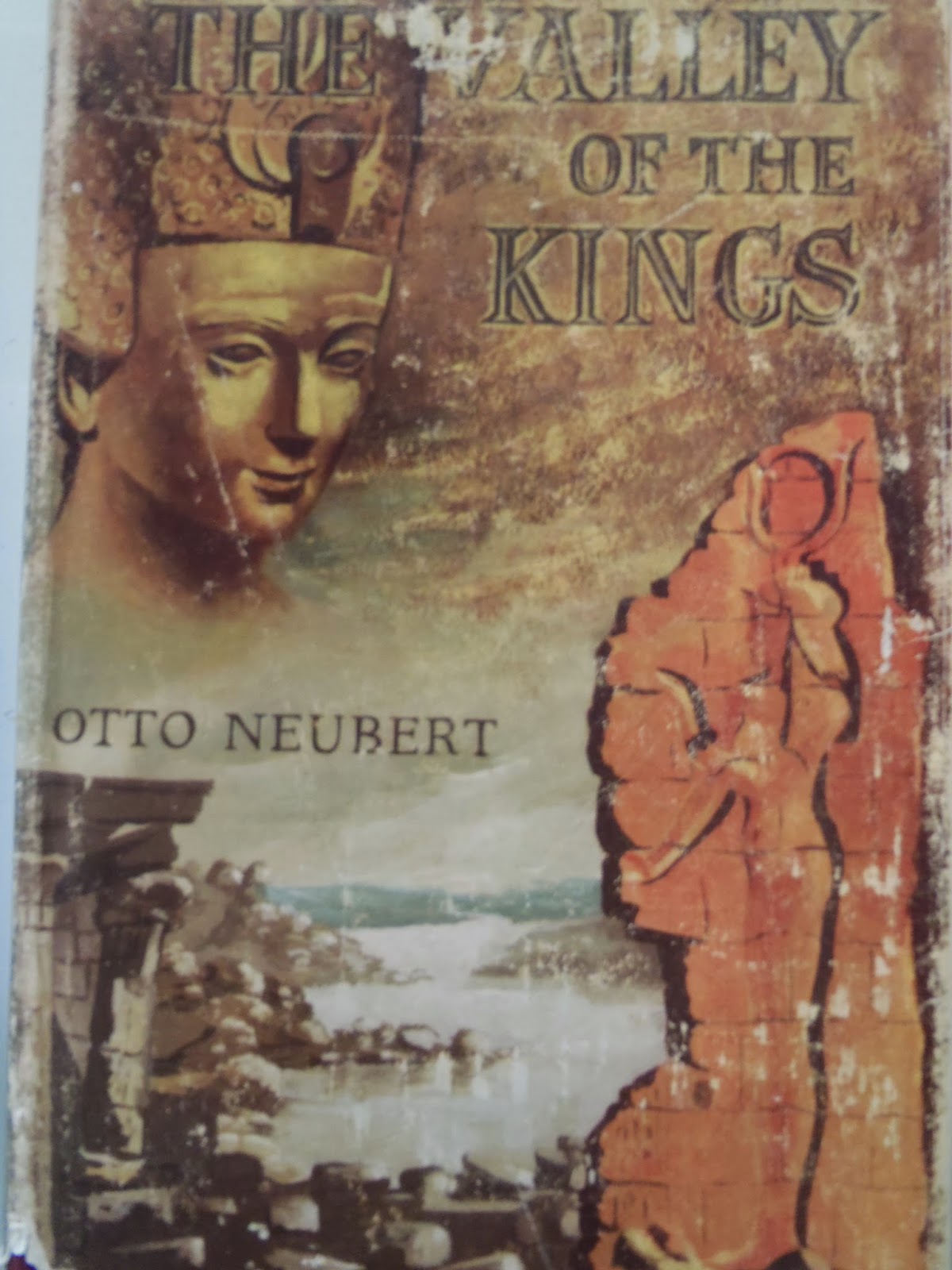 This fascinating book is filled with unusual highlights from excavations in the first half of the twentieth century. Complete with a mention of the recently found mask of Kanefernefer before it was noticed in 1959 as missing, now at the center of a scandal between Egypt's S.C.A. and the St. Louis Art museum.


The author's chronological history is off of course it is 50 years later but his view is interesting when his attitudes are not annoying. Mr. Neubert's vision of Akhenaten is a Christ-like figure as opposed to a tyrannical egomaniacal despot.


His inclusion in the excavation of the tomb of Tutankhamen has its interesting points, however, the accuracy of his words is not good and this failing becomes more apparent as the book goes on.


The book contains a lot of unsubstantiated theory including that King Tut's brains and heart were placed in one of his four canopic jars. The book ends with a roundup of ancient history in the middle east and Mesopotamia with the final conclusion of the book on Christian theology.


The author was all over the place in this book his nuggets of information which made the start of the book so interesting were totally called into question by the regular misinterpretations later on and for me ruined the impact of his words.


The Valley of the Kings was not great and certainly, the best words I can give for it are average and dubious.

Here we have a video and article on the recent installation in the British museum.

http://www.telegraph.co.uk/culture/culturecritics/richarddorment/4290640/The-tomb-chapel-of-Nebamun-at-the-British-Museum-review.html
Posted by Timothy Reid at 10:41:00 AM No comments:

Well the sacred lake at the Mut temple has been drained time to start work.

http://www.jhu.edu/egypttoday/index.html
Posted by Timothy Reid at 12:13:00 PM No comments:

http://www.guardians.net/hawass/Press%20Releases/apprehended_antiquities_trader.htm
Posted by Timothy Reid at 11:32:00 AM No comments:

This article has a wonderful image of one of the recently found false doors.

http://www.guardians.net/hawass/discoveries/First_Intermediate_Period_Discovery_at_Ehnasya_El-Medina%20.htm
Posted by Timothy Reid at 12:24:00 PM No comments:

Here we have the recent discovery at Ain Sokhna

http://www.guardians.net/hawass/discoveries/New_Discovery_in_Ain_Sokhna.htm
Posted by Timothy Reid at 12:20:00 PM No comments:

Long has the riddle of the sphinx's age been in question though I doubt it will be proved anyway. I personally believe the face is that of Djedefre mainly because of a head of that king in the Louvre.

http://mgu.bg/geoarchmin/naterials/64Manichev.pdf
Posted by Timothy Reid at 3:45:00 PM No comments:

Another Victim of the CT scanner

This lovely coffin and mask belong to a woman who died in the Ptolemaic period and was probably no beauty when she died.

http://www.odt.co.nz/your-town/dunedin/39257/mummy-facing-more-scrutiny
Posted by Timothy Reid at 3:41:00 PM No comments:

Here is a video of Dr. Hawass handing over that lovely bronze to ambassador for Iraq but first you will have to suffer through that stupid dog whisperer advertisement again!

This article has a number of interesting pictures of the lovely statue.

Unfortunately the tomb was never gated and a number of the tombs paintings have been hacked from the walls of Panehsy's tomb.

A despoiled mummy of what appears to be the mother of the Old Kingdom ruler Teti has recently been found within the burial chamber of her ruined pyramid.

The coffin and mummy of the temple singer Meresamun will be on display at the wonderful Oriental institute in Chicago this year.

http://oi.uchicago.edu/museum/special/meresamun/
Posted by Timothy Reid at 12:24:00 PM No comments:

This is an interesting lecture from Luxor's Mummification museum on tomb tt147. 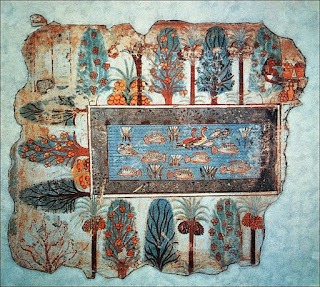 The eleven beautiful panels from the tomb chapel of Nebamun have been conserved and are now on display at the British museum: The Nebamun panels

These images from the mortuary temple of Thutmosis III show that little remains and what does can't get no respect.

http://luxor-news.blogspot.com/2009/01/tuthmosis-iii-mortuary-temple.html
Posted by Timothy Reid at 11:32:00 AM No comments:

A very interesting article on an early autopsy of a late period lady mummy and the candles made from the mummies adipocere. Now that's just gross.