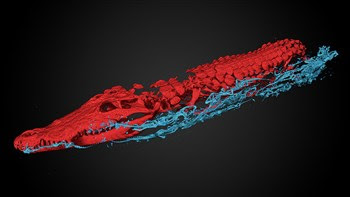 The fine folk at the Rijksmuseum received a surprise when they put their impressive 3-meter long, 3000-year old Egyptian crocodile into a CT-scanner. The team at the Rijksmuseum knew that a couple of baby crocodiles were present and wrapped individually within the larger beast. To the surprise of everyone present, the scan revealed a whole nest of baby crocodiles within the mummy.

A new interactive display on the crocodile mummy and the mummy of a priest will allow visitors to the museum to conduct a virtual autopsy.  Anyone visiting the Netherlands in the future will want to visit the museum. Just watch out for the crocodiles! 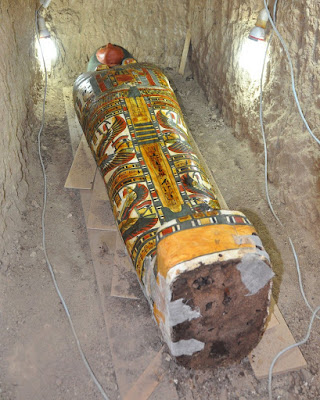 Spanish archaeologists have found a small chamber tomb within the mortuary temple of Thutmosis III at Deir el Bahari. The tomb contains a stunningly beautiful mummy untouched since the day this servant of the royal house was buried. The mummy found inside is a man named Amenrenef who died sometime in ancient Egypt's Third Intermediate Period and probably quite late in that period around the 23rd or 25th Dynasties, closer to 664 BC.

When Amenrenef lived Egypt's period of greatness had long past and a series of foreign dynasties gained control of Egypt.

The Northwest Museum in Spokane Washington is currently running a short exhibition "Lost Egypt: Ancient Secrets Modern Science". The exhibition contains a number of mummies including one human mummy from ancient Egypt. The amazing technology of modern science on mummy studies has brought images of what the unwrapped mummy looks like and what else may lie under the wrappings without removing the bandages and destroy the mummy.

The short running exhibition is very child-friendly with interactive displays but time is running out as the show closes on January 6, 2017. So if you are in Spokane before that then bring the kids for a fascinating day and meet the mummy!

The beautiful mummy is from the Ptolemaic period, Cleopatra's dynasty.

Gold and the Gods: Jewels of Ancient Nubia 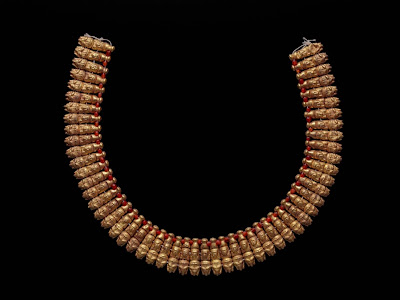 Early in the 20th century Havard University and the Museum of Fine Arts, Boston expedition conducted excavations in Nubia under the guidance of Dr. George Reisner. Reisner and his team excavated many of the sites in Nubia including Jebel Barkal, Kerma, and the pyramids of Meroe and Nuri. The pyramids at Nuri contained royal pyramid burials, a number of which belonged to the kings and queens of ancient Egypt's 25th Dynasty.

The Museum of Fine Arts has been holding an exhibition" Gold and the Gods: Jewels of Ancient Nubia" displaying the jewelry found during Dr. Reisner's years of excavating the sites of Nubia. This long-term exhibition is coming to an end on January 8, 2017. Do not miss this opportunity to see the show if you are in Boston.

These excavations can be found on "The Giza Archive " site and are among some of the most interesting in Dr. Reisner's long career of excavating and make for fascinating reading. Also, visit the museum's website as the museum possesses one of the world's finest collections of Egyptian and Nubian art.