Rehuankh from the Middle Kingdom 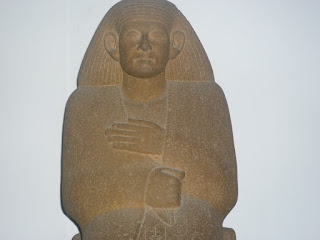 In the British museum
Posted by Timothy Reid at 7:45:00 PM No comments: 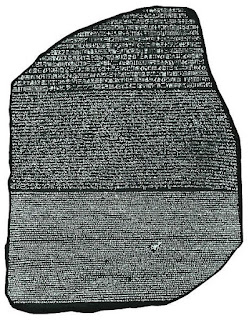 Dr. Hawass says about the stone "a piece that has been stolen and passed on from one occupier to another". That six letter word does not help his cause.

Dr. Hawass goes on to say that the Egyptian authorities will not be silent until the stone is returned to Egypt, even if it takes a thousand years. Makes one wonder if the stone will still have any importance in a thousand years if it has not been destroyed by war, disaster or from people who cut up saints for relics.

Dr. Hawass has had a most remarkable career and as the guardian of Egypt's antiquities has been successful in many of his important efforts. However the good doctor has with time gained a reputation of threatening people who his cause still needs and whom will in turn freeze in objection as long as Dr. Hawass is in his job, or perhaps any job with Egypt's ministry of culture.

But the last word belongs to the doctor who said, "I have embarked upon trying to regain the Rosetta Stone as well as other antiquities that I consider key to understanding the Egyptian civilization and ones that can best convey its superiority."
Posted by Timothy Reid at 1:29:00 PM 2 comments:

A bill is making its way through the Egyptian parliament that has infuriated the Egyptian minister of culture, Mr. Farouk Hosni and his vice minister the head of Egypt's Supreme Council of Antiquities, Dr. Zahi Hawass.

The bill, which will probably not pass, would permit the buying and selling of antiquities in Egypt. Minister Hosni and Dr. Hawass want this law to apply only to nontransportable antiquities such as walls and not to portable objects. Under current Egyptian law, anyone who finds an antiquity must report it to the Supreme Council of Antiquities within two years though Dr. Hawass wants this reduced to six months.

If the bill passes both men have threatened to resign. Talk about tempting your enemies.
Posted by Timothy Reid at 1:16:00 PM 1 comment:

An interesting article based on a comparison of the lives of ancient Egyptians with those of today though that king Tut mask gives me the creeps!
Posted by Timothy Reid at 8:13:00 PM No comments:

This is a page from the Getty museum on the conservation of king Tutankhamun's tomb that is now ongoing in the valley of kings. The Getty museums site lay's out the projects objectives as well as it's very respectable past record in preservation of the royal mummies in the Cairo museum and including the restoration of the tomb of Nefertari in the valley of queens.
Posted by Timothy Reid at 1:07:00 AM No comments:

Statues in the Sudan

Here is another article on those statues found in the Sudan. The remarkable things is their location far south of where other Kushite material has been found. The fragments make up four statues which appear to have been ritually broken.
The most important of the statues is a 1.5 ton statue of the last king of Egypt's 25th dynasty the pharaoh Taharqa. The Sudanese kings Aspelta and Senkamanisken are also represented in the group as is a fragment of a crown of an unidentified fourth statue.
Posted by Timothy Reid at 10:39:00 AM No comments:

A call has gone out for a terminally ill person to give their body to be mummified in the Egyptian manner for a television show. There is hope that afterward the mummified corpse will be put on display in a museum.
Posted by Timothy Reid at 12:10:00 PM No comments:

Pope Benedict XVI has condemned the very disturbing recent killings in Egypt on the eve of Coptic Christmas. The drive by killing of six Coptic Christians was followed by Christians and Muslims setting fire to each others properties 60 km north of Luxor.
Posted by Timothy Reid at 2:41:00 PM No comments:

Taharqa in the Sudan

Finally we have a picture of the massive statue of the Egyptian pharaoh Taharqa last pharaoh of Egypt's 25th Nubian dynasty. The striding statue of the king has been found far south of Egypt in the Sudan. Statues of two other Nubian kings were found near the Taharqa statue but these rulers were never Egyptian pharaohs.
Posted by Timothy Reid at 12:24:00 AM No comments: