The Secrets of the Pyramids 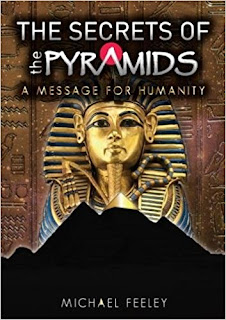 With all the Egyptian books I have reviewed I can usually get a good sense of the content, the authors knowledge, and sense of the writers taste. It appears from the start that this book will be spiritual by nature. The book opens with a number of quotes including from Leonardo Da Vinci but more concerning is a quote from fiction writer Dan Brown author of the Da Vinci Code which left me cringing as I am no fan of contorting history to fit into a narrative no matter how entertaining.

The author is apparently a descendant of Celtic Irish kings and a former United Kingdom police detective the latter gives me some hope of a trained inquisitive mind. The author believes in paranormal and supernatural powers and on a couple of occasions has witnessed dimensional portals open up in front of him and other hallucinations. I am only at the biography of the author and trepidation is rushing over this reviewer.

In the introduction, Mr. Freeley puts forward the very popular belief that an advanced civilization has left a message to humanity encoded within the monuments. This nineteenth-century theory is usually linked exclusively to the Great Pyramid. The reader is met with a hieroglyphic alphabet of twenty-two letters which I have never seen before and are anything but Egyptian hieroglyphics. The author gives dictionary definitions of enlightenment, consciousness, and Kundalini Awakening in the concept of Dharma.

Prior to the authors trip to Egypt, he is contacted by a UK Psychic who lacks the ability to spell properly. In her note includes the sentence " You need to first look passed the tourism" in large letters. Chapter one opens with Mr. Freeley's trip to Egypt including the hope to meet the famous Dr. Zahi Hawass whose last name is misspelled. The chapter ends with another example of the misspelled word passed when the word intended was past.

In chapter two the author presents a good traditional view of Egypt with the belief that slaves built the pyramids of which there is no evidence for this. Mr. Freeley then begins with explanations of the meaning of words including the famous so-called helicopter found carved in a lintel of the temple of Seti I at Abydos. Heli meaning Helios/sun and copter with Coptics together meaning "Christian Egyptian", and including the god Horus whose name is an anagram meaning hour(s).

The book moves forward to the gods of ancient Egypt and the roots of Egyptian royalty and government. We for some reason are on to the transcript of the 1953 coronation ceremonies of England's Queen Elizabeth II which occupies more than thirty pages of a 131-page book.

The author is all over the place in this book and cannot be recommended as serious reading for Egyptologists, and Egyptology lovers. Unfortunately, the book is filled with spelling mistakes and dubious theories that are not suitable for young people to learn from nor was it particularly entertaining. In the end "The Secrets of the Pyramids" should remain a secret.