The Lost Chapel of Nebamun 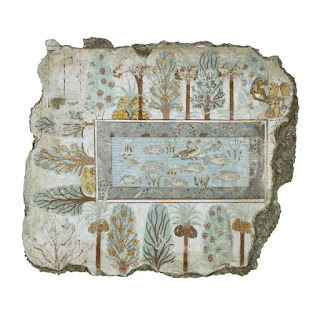 Nebamun was an 18th dynasty Egyptian nobel who lived somewhere around the reign of the opulent King Amenhotep III or his successor Amenhotep IV. Nebamun is known today most famously for eleven fragments of frescoes from his tomb chapel housed since 1823 in the British Museum. The museum acquired them in the purchase of the first collection of British Council General to Egypt Henry Salt.

A number of other fragments are in other museums including Cairo and Lyon. The fragments are some of if not the finest surviving frescoes from the Theban necropolis.

The fragments in the British Museum were found by Giovanni d'Athanasi probably at the north end of the Dra Abul Naga settlement in 1820. This information is known because a fragment of men catching quails in Berlin was seen during the excavations of the Marquis of Northampton in 1898-99.

Recently there are reports that Nebamun's tomb chapel has been found though the gist of the article I read did not say it had been found but that rather with the tearing down of the houses in the area they "may" find the tomb.

Objects from the Kharga Oasis 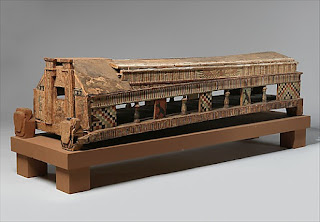 Here we have the exhibition from The Metropolitan Museum of Art on their excavations in the Kharga Oasis early in the last century. The images of the intact tomb LXVI, discovered by the excavation in 1930-31 are fascinating!

Here we have the website of the hotly disputed collection of Amarna period sculptures collected by antiques dealer M. A. Mansoor with some scholars considering the collection to be fakes while others are comfortable as feeling the sculptures are genuine.

The video is interesting but it is the museum gallery of images that is for me disturbing as I find all of the trial pieces to be too similar and fresh looking yet without soul and lacking any depth of detail. Not to mention the lack of subjects within these vacant heads and how alike they are to pieces both in Cairo and Berlin found in the house of Thutmosis at Tell el Amarna except with faces reminiscent of the hideous colossal figures of Akhenaten from the Gem Pa Aten at Karnak. That would make most of these pieces from an early period of the kings reign while presumably the works found in the sculpture Thutmosis house which possess great spirit are from the later part of Akhenaten's reign?

Picture 1 of a sculpture of Akhenaten has the same face as #24 and #26, busts of the Amarna princess' with the faces being crudely worked with details left unfinished on all pieces. This could be explained by the works being found in a lesser sculptures studio at Tell el Amarna. The nemes headdress on the sculpture (1) also appears to be just the wrong shape for my tastes.

In the collection shown only one nose is missing with two more slightly damaged this is unusual for a collection of sculptures from ancient Egypt. Images # 37-39 seem to be copied directly from a painted scene of Smenkara while the two seated princess' come directly from the famous mural found by Flinders Petrie at Amarna and now in England.

This is not new but worth another look at so you can be the judge!