The Stela of Pasi


In Berlin stands an Amarna period limestone stela/ DDR 17813, the stela is only 21.7 cm in height and in sunk relief, it portrays two kings showing affection to one another. The king on the left wears the blue crown while the one turned affectionately towards him wears the combined crowns of Upper and Lower Egypt, other than their crowns and sandals both appear to be naked though the central king is probably wearing a pectoral, this may be an indication that that king is deceased.

The kings sit on chairs with footstools in front of a table of offerings while the Aten shines down on both, it's rays ending in hands two of which are holding ankh signs to the faces of the kings. The scene is surrounded by a plain incised border. Overhead of the kings are seven empty cartouches and beneath the picture is a line of inscription that gives this stela its familiarity as being "drilled by Pasi, captain of the state barge".

Absolutely nothing about the stela is "drilled" but it's most remarkable feature is the adoring pose of it's central king to his counterpart, a pose which has the appearance that the two kings may kiss and a homosexual relationship has been surmised by some viewers. Because the cartouches are blank it is impossible to know which two Amarna kings are being shown whether it be Akhenaten and Smenkhkare or Akhenaten and Nefertiti, with the question being raised as to whether Smenkhkare and Nefertiti are the same people.

Nearly equally remarkable is the crude workmanship of the piece complete with the king wearing the blue crowns right hand is actually a left while the ribbon at the back of his crown looks more like a haunch of meat that should be on the offering table rather than a flowing ribbon seen on many depictions of this king and his wife Nefertiti, this ribbon also juts out into the plain border. 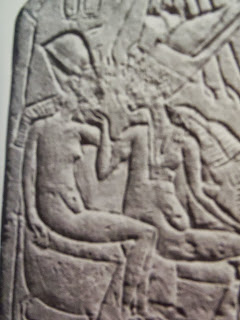 The same can be said of the white crown worn by the central king which looks more like a turkey drumstick than the crown of Upper Egypt. The faces of both kings have been mutilated however rather lightly especially given the small size of the monument. The face of the central king is particularly poorly carved and or perhaps re-carved while above his crowns floats a swirl and other elements unrelated to him including an oddity directly below the orb of the Aten. On either side of the Aten the two scratched lines and the two floating oddities below may be all that is left of an earlier inscription?

The damage at this part of the stela above the crown appears to be deliberate to hide an earlier carving. The table of food offerings is also poorly carved though there is a slab in the middle of the pile but otherwise the effect of this pile gives one the impression of the offerings are right on top the middle king or perhaps the heap is in the back corner of the scene as opposed to in front of the kings while above this pile floats another unknown object, which may be part of an earlier measure.

A fold of cloth drapes from beneath the central king while behind his legs is a line running parallel to the front of the king with the blue crowns throne which itself could easily be a Victorian bathtub, the parallel line appears to cut through the footstool of said king. This line may actually run into the Pasi inscription?

The cartouches and the five lines surrounding the orb are merely scratched in as is the line running beneath the three cartouches above the offerings this is true of the border line which surrounds the scene with the border-line behind the kings being particularly poor yet the top and bottom lines of the inscription are a little better done.

There is little doubt that the current image is the last image placed on the block but more than likely not the first and I would doubt that the inscription has anything to do with the current image. Rather that this stela is a fragment of an even larger object perhaps in relation to Pasi's duties as captain of the state barge where one would certainly need stones drilled to be anchors.

Within the group of Amarna depictions of the royal family, this is perhaps the most interesting and poorest carved scene though one wonders what the political message is and how this stela would have played on the sensibilities of the king. Humor, fortunately, is represented often in Egyptian art.

All this taken I am not a believer in its authenticity but rather believe I recognize in it the hand of a nineteenth or twentieth century forger who more than likely found a broken anchor perhaps from the state barge "Khaemmaat" with the inscription at one end of it and the drilled hole towards the other there may also have been graffiti on it around where the orb is. The remains of the hole having been cut off and the block carved over with a desirable royal scene of the highly collectible Amarna period.

An inscription on an Amarna royal stela that does not mention the names of those chosen to depict clearly proves in itself as completely unprofessional and inappropriate use of the stone, I guess the carver was hoping that no one would be able to read the text and perhaps the first time it was sold this trick may well have worked but inevitably now that it can be read its message is one of contradiction, not propaganda.

Coming from the amateur hand I would imagine that if the piece were to be ancient the artist may have been controversial in choosing his depiction and I would wonder if the artist would then want their name on what may be one of the most questionable pieces of Amarna art but then again it is an image of that criminal!

I don't recall ever reading that this piece may be a forgery, but of course you may be correct.

I've always viewed the subjects not as two kings but simply as Akhenaten and Nefertiti. Nefertiti is known to have performed kingly rituals and worn kingly headgear. Also, note that there are only three cartouches in front of the figures. This makes sense for a king and great royal wife. If the second figure was another king, wouldn't there be a total of four cartouches?

I would agree with you Stephen particularly in the case of Nefertiti! The flaunting of the headgear regalia and cartouches by this couple is well attested too however as Egyptian artists rarely identify themselves, Pasi's inscription appears more important than the names of the crudely carved kings presented?

The Pasi inscription is authentic and to me the Amarna depiction a clever forgery.