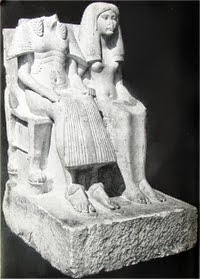 This statue is of the last king of ancient Egypt's 18Th Dynasty, Horemheb, who reigned from about 1323-1295 BC. The statue was found at his Saqqara tomb he had created before his accession to kingship. Here the king is seated next to his likely first wife Amenia, and sadly this is what the statue looks like today in Luxor. 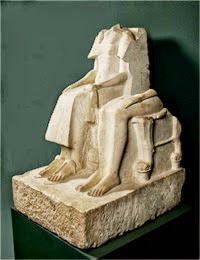 Over the years I have been running this search on my site in hopes that someone will return Amenia. Certainly the missing piece is unsalable, and as a result, she may just be hidden away being a dangerous lady to be found with. She may have undergone alterations like cutting away the lower torso, and perhaps the join between her and her husband. Add a little paint, and she may be now the bust of an unknown woman sitting in plain sight.

The Egyptian Supreme Council of Antiquities has a number of objects they are looking for besides Amenia including 38 gold mainly Greco-Roman bracelets stolen since the 1970's.

The Egyptian Supreme Council of Antiquities

Top photo: (from Martin, The Hidden Tombs of Memphis)