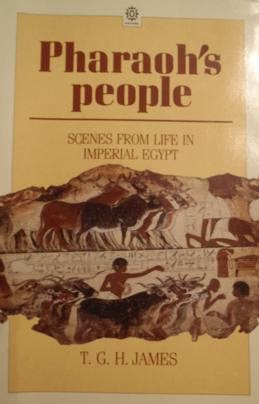 The late great T. G. H. James was among other things a Keeper of Egyptian Antiquities for the British Museum for many years. Mr. James opens his book with a breakdown of the sketchy records which tell the tale of the ancient people including the authors chosen subjects for his book from c. 1500-1400 BC.


These surviving documents include the tomb of the Vizir Rekhmire and other monuments of the reigns of the XVIII Dynasty king's, Hatschepsut, Thutmosis III, and Amenhotep II. The vandalized tomb of Rekhmire numbered 100 in the Theban necropolis, has an entrance corridor that starts at 3 meters in height and rises to a height of 8 meters with the statue niche at the end of the hall 6 meters above the floor though no statue is present


The trustworthiness of ancient sources is reviewed with the blatant example of the battle of Qadesh in its many depictions and its use as propaganda where for thousands of years left Ramses II with a reputation as a heroic king. The discovery of the Hittite archives by modern archaeologist has now revealed Ramses II did not win a glorious victory at Qadesh but left a false piece of propaganda which worked!


On the other hand, the annals of Thutmosis III were carved on walls at Karnak that was deep within the temple where they would not have been seen by anyone other than priests and were likely carved in memorium to Thutmosis III. Tomb records of lesser officials though often glorify the tomb owners accomplishments sometimes do provide details not found in the official or royal records.


Mr. James takes up the role of Vizir from an inscription in the tomb of Rekhmire known as "The Installation of the Vizir". This documents Rekhmire's duties to be just and fair when carrying out his responsibilities, of which are many including judicial and bureaucratic in nature. This document is found in four tombs within the Theban necropolis and believed to be reproduced in all four tombs from a Middle Kingdom document.


As interesting as the book is it will likely not be suited to a young person or those looking for a storybook but it is rather a more academic read with a page or two of authors attribution notes at the end of each chapter. The book is filled with tomb biographies from various nobles of the New Kingdom of which on the subject of agriculture familiar to many if not most of the tombs the farmer is an undesirable job and hard way of life certainly compared to that of a scribe.


This message is further incorporated into these burials by the presence of shabti figures to do the owners work in the afterlife including the sowing of the fields. Mr.James next explores the hieroglyphs and surviving literature involved in the teaching of young students to become scribes.


The materials possessed by scribes are explored as is the manufacture of papyrus and its allocated uses in documents. Fresh pages for liturgical documents such as "Book's of the Dead" or rewashed pages written over with new texts for personal use such as letters. Mr. James informs the reader of the contents of many different styles of documents found and collected for the various museums particularly Cairo and the British Museum.


Metal workers are presented from the wall paintings found in many tombs but here of particular interest in the tomb of Rekhmire showing the Vizir visiting the workshops and the various activities occurring within. The creation of objects of necessity and beauty seems to have left little appreciation for the craftsmen who were responsible for them as these workers did not appear to live luxuriated lives and as a whole remain mostly anonymous.


The subject of the book is utilitarian in nature based on the occupations exemplified on the walls of the tombs and surviving documents. I was taken back for though the book was filled with excellent details it was a read of daily survival which I do not think would interest most readers.


The book is certainly a must-read for anyone who wishes a career in Egyptology but I would not recommend it for the casual reader as in its dry minutia I lost interest in "Pharaoh's People".
Posted by Timothy Reid at 4:29:00 PM No comments: