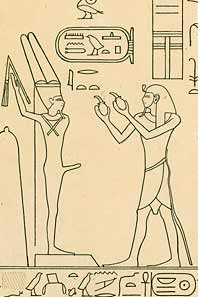 435. The relief shows the king offering wine before Min of Coptos; behind the king are the words: "First occurrence of Sed jubilee; at the top the date: Year 2 second month of the first season (second month), day 3"

436. Then the following:
This wonder which happened to his majesty : that the beasts of the highlands came down to him; there came a gazelle great with young, going with the face of the people before her, while her eyes looked backward; she did not turn back until she arrived at this august mountain, at this block, it still being in place, for this lid of this sarcophagus. She dropped her young upon it while the army of the king was looking. Then they cut off her neck before it and brought fire. It descended in safety.

437. Now, it was the majesty of this august god, lord of the highlands, who gave the offering to his son, Nibtowere, Mentuhotep IV, living forever, in order that his heart might be joyful, that he might live upon his throne forever and ever, that he might celebrate millions of Sed Jubilees.

438. The hereditary prince, count, governor of the city and vizier, chief of all nobles of judicial office, supervisor of everything in this whole land, the vizier Amenemhet. 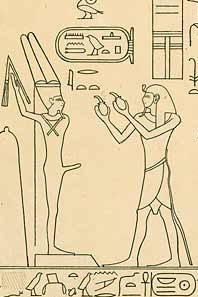 Eight days after the First Wonder occurred a Second Wonder was added to the king's stela recorded on the rocks of the Hammamat quarry.

451. One set to work on this day on the block of the sarcophagus. The wonder was repeated, rain was made, the forms of this god appeared, his fame was shown to men and the highland was made a lake, the water went to the margin of the stone. A well was found in the midst of the valley being 10 cubits by 10 cubits on its every side filled with fresh water to its edge, undefiled, kept pure and cleansed from gazelles, concealed from the troglodyte barbarians. Soldiers of old and kings who had lived in the aforetime went out and returned by its side, no eye had seen it, the face of man had not fallen upon it but to his majesty himself it was revealed............... Those who were in Egypt heard it, the people who were in Egypt, South to the Northland (Delta),  they bowed their heads to the ground, they praised the goodness of his majesty forever and ever.

Completion of the work

452. On the twenty-eighth of the month work was completed, and the following appendix was added to the king's stela:

453. Day 28. The lid of this sarcophagus descended, being a block of 4 cubits, by 8 cubits, by 2 cubits, on coming forth from the work. Cattle were slaughtered, goats were slain, incense put on the fire. Behold, an army of 3,000 sailors of the nomes of the Northland (Delta) followed it in safety to Egypt. 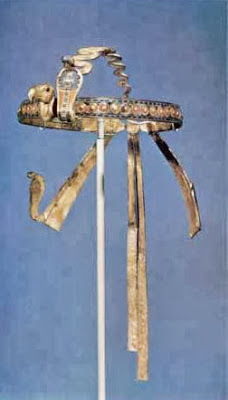 I recently wondered how unreasonable is it to reunite King Tutankhamun with the gold diadem found on his head and removed by Howard Carter, it is after all his. Why should not Tutankhamun be reunited with his magical serpent protectors, his royal symbols of power and authority? I really don't think anything else of his jewelry needs to be on the mummy particularly because of the especially fragile different pieces that make up the mummy likely could not support any other of his jewels.


He alone has come down to us as a bedecked mummy, he alone has come down wearing his crown and should again. Tutankhamun is the world's most famous Egyptian king and probably the world's most well-known cadaver. His grandfather Amenhotep III was one of the richest men in history(1), at the height of the greatest empire of ancient Egypt. Tutankhamun took to his grave the left over fortunes of one of the richest families in history, though much had been squandered by his father Akhenaten. 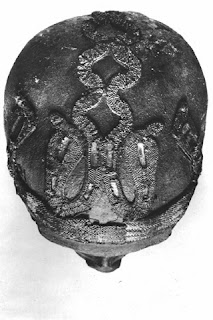 Only Tutankhamun can wear his crown again, he stands alone among the pharaohs. Harry Burton's photo above demonstrates a problem in this seemingly fragile cap under the diadem. This bead cap which probably matched the diadem might be impossible to restore as I imagine the resins used on his mummy have probably destroyed at least parts of the cap.


Can it be recreated with modern materials, and should a replica of the gold diadem be mounted as part of any new display of Tutankhamun's mummy at the future Grand Egyptian Museum?


This mount could be built into the display which would have the added benefit of holding the king's head in place, protecting it. In this way, the real one could still be displayed with the other objects belonging to the king. The mummy of King Tutankhamun is the only pharaoh who has come down to the present wearing his protective and precious diadem. It is not unreasonable to suggest he can be reunited with this part of his regalia and be safer for having it back.