The Pyramids by Ahmed Fakhry 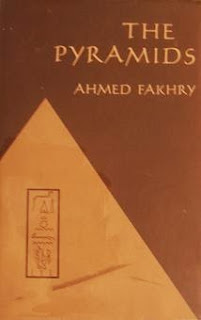 This 249 page read from the University of Chicago press contains many images and schematics to help in the explanation of the monuments including at the back of the book a listing of all the known Egyptian pyramids as of 1961 and their base measurements. The author is extremely knowledgeable on the subject and introduces interesting information that I have not heard before. Mr. Fakhry explains the pyramids in their apparent chronological order including their associated mortuary and valley temples.

"The approach to the southern pyramid complex of King Snefru at Dashur is through a Valley Temple situated near the edge of the cultivation. At the time of writing, this is the earliest Valley Temple discovered." "... there was no temple of this type for the Step Pyramid of Zoser, nor any remains of a causeway which would suggest that such a building had never existed."1

The author explains the rise of building of these monuments culminating in the great pyramids on the Giza plateau and their accompanying causeways, temples, and boat pits, including the discovery of royal statues found during excavations. We are told about the previous excavator's discoveries to the various sites including the measurements of the monuments which at times caused me to glaze over. Mr. Fakhry gives admirable insight into the enigmatic pyramid site at Abu Rawash excavated in 1901 by E. S. Chassinat.

"South of the Mortuary Temple on the east side is a large rock-cut boat pit. With its long axis pointing north-south, it measures 35 meters long, 3.75 meters wide at its widest part, and 9.3 deep. At the bottom of the debris filling this boat pit, Chassinat found three beautiful heads from statues of Rededef. They had been wantonly knocked off the bodies and flung there during the upheavals that followed the Old Kingdom. (Two of the heads are now in the Louvre, and one is in the Cairo Museum.)"2

When Perring and Vyse entered the third pyramid at Giza, that of Menkure in the late 1830's they found a wooden coffin and the mummified body of a man, the inscription on the late period style coffin reads.

As the Old Kingdom descended into anarchy the pyramids of the fifth and sixth dynasties became smaller and built in poorer quality work. The burial practices changed and the pyramid texts appeared carved on the walls of these kings and a number of their queens. It is during the following period that most of these monuments were opened with the royal burials robbed and destroyed leaving only fragments of their once opulent contents.

The rise of the Princes of Thebes in the expulsion of the foreign overlords who ruled over the northern half of Egypt resulted in the reunification of the country with a period of great prosperity. It is in the Twelfth Dynasty that the kings returned to building pyramids but this time with complex corridors and hidden entrances to baffle looters who found the entrances of the Old Kingdom pyramids in the north face.

In Egypt, the pyramid age dwindles down to small mudbrick pyramids above simple tombs both royal and commoner. In the Twenty-Fifth Dynasty, pyramidal burials are found south of Egypt in Sudan at sites like El Kurru, Kerma, and later at Moroe. These royal constructions are much smaller and much steeper.

Mr. Fakhry's presentation of the pyramids was both of interest and knowledgeable as I had suspected he would be, and though almost sixty years later this book is well put forward and suitable for ages ten and up.

"...they are perished also,
Those walls of Thebes which the Muses built;
But the wall that belongs to me has no fear of war;
It knows not either the ravage of war or the sobbing.
It rejoices always in feasts and banquets,
And the choruses of young people, united from all parts.
We hear the flutes, not the trumpet of war,
And the blood that waters the earth is of the sacrificial bulls,
Not from the slashed throats of men.
Our ornaments are the festive clothes, not the arms of war,
And our hands hold not the scimitar,
But the fraternal cup of the banquet;
And all night long while the sacrifices are burning
We sing hymns to Harmakhis (Hor-em-akhet),
And our heads are decorated with garlands." 4