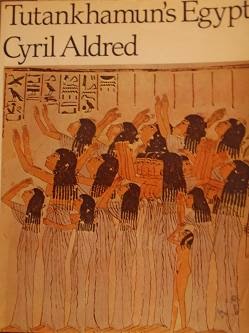 Looking for the next volume from my collection to read I found three books I have not reviewed by the late Cyril Aldred and realized it was Christmas 2012 that I last reviewed the great man's work in his 'Jewels of the Pharaohs'.


You have to love a brief introduction and chronology with events of interest which occurred during Egypt's many dynasties including the Ptolemaic Dynasty who's pharaohs were responsible for the great temples at Dendera, Edfu, Kom Ombo, Esna, and Philae. The author begins with the Egyptian people and their lives in chapters that are short and filled with black and white pictures which often dominate the texts on many of the pages.


It amazes me how much information is crammed into the tomb paintings of the Egyptian nobles which by the Eighteenth Dynasty reveals the various trades and even how those trades were carried out. Inevitably the tomb paintings would always show the bountiful life with tomb owners sitting in front of tables overflowing with the produce of the land which made Egypt into a food exporter to her neighbors in hard times. The Kings of the Eighteenth Dynasty brought to the nobility of generations the sweet life.


In the pyramidion of the fallen obelisk from Karnak created by Hatschepsut, it can be clearly seen that Amun has been attacked with a chisel and then re-carved at a later date. The same can be said for Amun's name on the obelisk leaving Hatschepsut, and her throne name Maat-Ka-Ra untouched. A series of colored images pass by including the launching of the night bark in the tomb of Seti I in the Valley of Kings. A statue of Amun bears the face of Tutankhamun representing likely the restorations carried out of Amun's statues and reliefs after the heresy created by the boy king's predecessor.


In the next chapter, we find here the King is depicted as an inspirational warrior hero and protector to his people. The great King Amenophis II is shown on a granite stela found at Karnak riding his chariot while shooting his arrows through a copper ingot. The reader is presented with the tombs of the Kings beginning with the Eighteenth Dynasty King Thutmosis I who created his tomb likely in the Valley of Kings. The author has also presented the three best surviving mortuary temples of the New Kingdom rulers a mile away along the Nile.


The peoples looked to the King to bring Maat to their world but without the effective governance of the Kings affairs by his officials harmony could easily be lost. Mr. Aldred puts forward a number of line drawings from the various officials tombs with my favorite being King Amenophis II on the lap of his wet nurse Amen-em-ipet. The Egyptian scribe was the fabric that held the monarchy and its bureaucracies together for thousands of years in records trivial and important.


Being a scribe there was plenty of room for advancement as was true of the military where a successful career could take a soldier to the top as in the case of Haremhab the last pharaoh of the Eighteenth Dynasty. The army was made up of soldiers of many nationalities as in the case of King Akhenaten who's bodyguard contained Asiatic, Lybian, and Nubian soldiers. Again I am impressed by the tomb representations of various trade workshops with just about every step represented in a small vignette.


Here the artist raises a pot from a piece of metal or fashions leather sandals, guilds a statue or creates a box through generations of artisans in reserved jobs passed from father to son. These artworks, for the most part, exist as anonymous creations by an unrecognized craftsman with few pieces able to attribute to a specific artist. The technologies such as working and transporting stone and the creation of papyrus paper still present fantastic achievements to us today. The hieroglyphic and hieratic scripts could be written on papyrus to form libraries and archives of the governorship of the resources including taxation and distribution.


The late Mr. Aldred ends his book with death and a goodly burial which often ignored the historical lessons that some day you may see someone wearing your dead mother's jewelry. I have to say that I figured it would be a fine read designed for the younger reader and to my delight it was rather light on King Tutankhamun's treasure. The books concentration was less about Tutankhamun than the times he lived and the laws which governed Tutankhamun's Egypt .


'Well tended are men, the cattle of god. He created heaven and earth according to their desire. He made the breath of life for their nostrils. They are his images that have come forth from his body.'

Jewels of the Pharaohs
Quote pg.  82

All Color Book of Egyptian Mythology 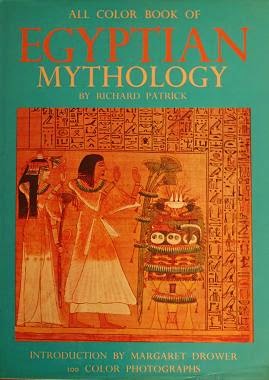 It is not often that one finds a forty-year-old book meant for those younger readers in as nice a shape as I have found this copy even though yes it also happens to not be my favorite subject along with Cleopatra and King Tut, I could do without them all! The introduction given by Margaret Drower is a good rundown of Egyptian history with of course some minor issues of kingdoms expected from a presentation made more than forty years past.


Chapter one is on the ancient Egyptian creator gods and religion presented by the plates represented on the pages accompanied by relevant descriptions. As I was browsing through noticed a number of artifacts displayed that I have not seen before including the beautifully preserved Sekhmet relief carving from Imen-m-hebra and family in the Cairo Museum. In plate 15 the reader is presented with two pillars at Karnak created for Thutmosis III though here identified as of Nineteenth Dynasty date and just three plates later King Nectanebo II is described as a Twenty-Sixth Dynasty Pharaoh. Right off the bat, we have two strikes.


In the next chapter, the author deals with the main gods within the Egyptian pantheon. In plate 24 the author implies that the tomb of Ramsses II's queen Nefertari is at Abu Simbel when it is actually at Thebes in The Valley of the Queens far away from Abu Simbel. Plate 27 is described as a colossal statue of Ramsses II at Karnak when in reality the truth of the beautiful image is better. While it is Ramesses II it is not Karnak but rather the temple of Gerf Hussein which could not be saved from the rising waters of the high dam and now lies deep beneath Lake Nasser.


With an image from the tomb of Sennedgem at Deir el-Medina, the author describes its owner as a member of the royal household when in reality he was a craftsman who worked on the tomb of Ramesses II. These mistakes are lessened by the fact that so many of the objects and sites presented in the book are obscure and a fine selection. There are many beautiful images from the temple of Seti I at Abydos which presented on the pages with other illustrations really brings home the high quality of King Seti's reliefs.


In chapter three Mr. Patrick puts forward the role of kingship and here the reader is presented with another high-quality monument. This time, it is the wondrous reliefs in the chapel built at Karnak by theTwelfth Dynasty King Sesostris I. In this historical overview, much of the author's concerns are based on Egypt's period of empire particularly the rulers of the later Eighteenth Dynasty, Hatschepsut onward.


The role of kingship is brought to its penultimate point under the Nineteenth Dynasty god-King Ramesses II. This king's extremely long reign dominated his dynasty and sadly the standard of craftsmanship declined. In plate 75 we find the interior of the temples of Abu Simbel baring crude reliefs though in the temples at Abu Simbel there are worse. These artworks bare striking contrast to the reliefs in the temple built by Ramesses father Seti I at Abydos.


The reader is presented with the afterlife described through various fragments of Books of the Dead though a typo lets us know that the book of Anhai is actually the only known copy of the Book of the Dad. In a final chapter, I am presented with sacred animals with an unusual image in plate 96 of a faience sow and her piglets. In plate 100 we find a much-damaged Falcon with four wings in flight from the breast of a Ptolemaic mummy.


The list of plates was the first rate in interest and for the most part well explained though there were about a half dozen bumps in the text which cause me concern as a gift especially for a child but for an adult like myself the All Color Book of Egyptian Mythology is worth having for the images alone.

An out of date synonym of stingy appears in the text which may be offensive to some readers
Posted by Timothy Reid at 6:13:00 PM 2 comments: