Discovery of the Mummy of Ramses I 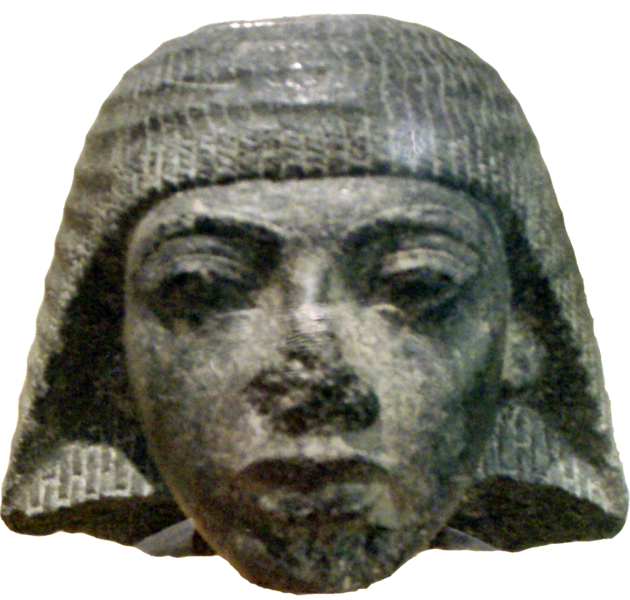 It is hard to believe that more than a dozen years has passed since the mummy below left a sideshow in Niagara Falls, Canada and made its way to the Michael C. Carlos Museum in Atlanta, Georgia, where the mummy would be revealed in a show to be the lost mummy of King Ramses I. The exhibition hall was decorated with reproduction walls of the king's simple tomb in the Valley of kings.

The museum advertised that they intended to graciously return the mummy to Egypt, which they did, and Ramses I was sent back in a jet being welcomed home in Egypt complete with red carpet. Research done on the mummy since has shown this man is about 400 years too late to be that king, and with this, the mummy was sent to the Luxor museum separated from the royal mummy collection in the national museum Cairo. 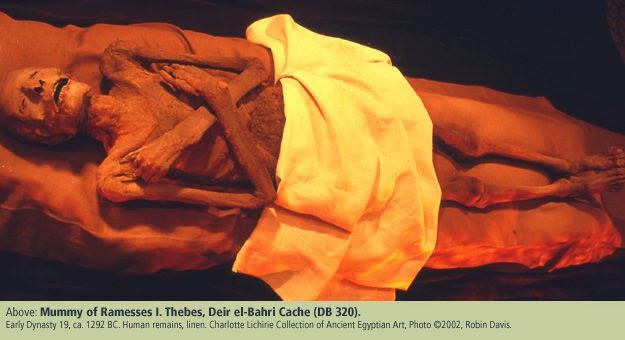 The theory of the day was that the Abd Roussel family who discovered the royal mummy cache removed the mummy of Ramses I for sale to the gentleman who brought the mummy back to Niagara Falls in 1860. The fault with this theory is the Roussel family did not remove any coffins from the cache especially since the massive wood sarcophagus Of King Seti I blocked the corridor which would have made it difficult to get any mummy past that coffin.

If the Abd Roussel's had wanted a mummy from that cache to sell to the doctor it would make much more sense to remove the mummy from the coffin of Nebseni at the entrance to the cache. Not to also forget, the mummy was in North America eleven years before the unofficial discovery of the royal tomb in question.

The mummy is certainly of high status demonstrated by his mummification but almost certainly did not come from the royal cache of DB320.

What became of the mummy of Ramses I?

While the Niagara falls mummy lay in his case the director of Egypt's antiquities service, Gaston Maspero in his 1889 book stated that the mummy of a naked well-built man found lying next to the broken remains of the coffin of Ramses I from the DB320 cache had raised its arm during a midday siesta frightening the workers when they returned back to work. The arm with some force was replaced back to its original position but the event left Mr. Maspero to remark that he believed that mummy to be Ramses I.

Over the years the mummy of Ramses II has been replaced as the mummy in the story because his arms are unusually high above his torso. The problem becomes that Ramses II was not found lying naked next to coffin fragments of Ramses I, in fact, Ramses II was sealed in his coffin and tied into a shroud which bore inscriptions of his Osirifications. Still somewhere around this time the mummy in question that of Ramses I disappeared.

The question had been raised in 1901 with the robbery of the tomb of Amenhotep II, and the rifling of the said king's mummy. What was the value of an authentic kings mummy on the black market? Workers at the then Boulaq Museum must first be looked to, was the temptation of those who held the keys to great to be ignored, this is unlikely. 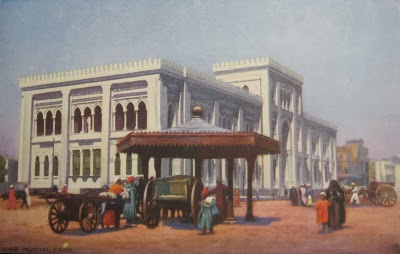 A king like Ramses II would be immediately missed but a lesser king such as Ramses grandfather the first Ramses maybe not so soon. So sometime between 1889 and 1902 the mummy in question vanishes from the national collection kept in the Boulaq museum or its transfer to the Giza palace museum. I would assume the Cairo Museum register has no record in 1902 for the mummy of Ramses I in the incoming collection to the new museum though recent events have displayed poor inventory records.

Most likely a search of nearby medical facilities might reveal not only Ramses I but hopefully the Priest-King Pinudgem I as well. Certainly, if a royal mummy was in the possession of a foreign nation's collection it would have been noticed by now.

So we are left with an old private collection or misplaced by the antiquities service. The worst scenario of a stolen king is probably wrong and both Pinudgem and Ramses are more than likely present in some long forgotten coffins on dusty shelves in Cairo.

If not Ramses I then who?

With all the descriptions of the mummy's high standard of mummification the lavish use of resin and pleasant odor which it exudes give a strong indication of his disassociation from the cheap coffin that is associated with the mummy. This is likely not an object that has something to do with the original burial of this man. The coffin has become almost completely irrelevant in finding the answer of its last occupant's name.

The most compelling testimony are the carbon 14 readings which do not support his identity as Ramses I by several hundred years.(A) Ramses I died around 1294 BC yet with carbon 14 calibrations showing dates ranging between 1085-790 BC he is not to be the first pharaoh of Egypt's Dynasty XIX.

His high standard of mummification suggests someone of a high place in Egyptian society while his date of death falls into one of the most controversial periods in Egyptian history, where Egypt fractured into multiple city-states with many cities having pretender kings. These kings emboldened themselves with royal privileges including the king's death pose of Osiris. His well-preserved corpse places his burial in Upper Egypt perhaps around Luxor with his standard of burial he may well fit in as the high priest of Amun or a local king.

He may well be the son of Osorkon I, the High Priest of Amun, Smendes III who died in approximately 874 BC.

Further Reading:
KMT; Winter 2000-01 Gayle Gibson, The Unfinshed History of the Niagara Falls Mummies, Pgs. 18-29
PBS.Org: The Mummy who Would be King
Posted by Timothy Reid at 3:50:00 PM

You leave out a number of important elements in the story. First of all, we do not know when the cache was first found and it could well have been within the time that the Niagara Mummies were first acquired. The “blackened” coffin: a). did not belong to this mummy and b) was not blackened in a fire, but is a typical Third Intermediate Period painted black coffin. All the details of the mummification point to the New Kingdom- far more reliable than a single carbon 14 date taken many years ago under undocumented circumstances.

As someone who possesses first hand knowledge on this subject I thank you for your help in correcting my article.

It is true the royal cache as I remember the story has the tomb already open when discovered by the Abd Roussel's in approximately 1871, while the Prince of Wales part of Queen Nodgmet's book of the dead, almost certainly from the tomb, may well have been in the princes possession long before the 1871 date as well.

Thank you for the corrections on the coffin and for pointing out the undocumented circumstances of the carbon 14 date.