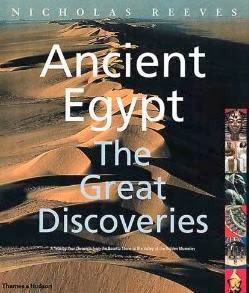 This book is by the well known Egyptologist Nicholas Reeves and I must say right from the start I like this book for its chronological order of discoveries, which I found very informative and innovative usually, the discoveries are listed by  the period as opposed to the date of discovery.


Sadly many of the great discoveries occurred early in the 19th century and as a result, their context and any objects that were not considered of value were lost or discarded, including Thutmosis III's legendary General Djehuty, who's intact gold encased mummy turned up in the winter of 1824. The author moves forward to the period of men like August Mariette who forwarded the science of archaeology and found the burial place of the Apis bulls, the Serapeum,


"the burial, made in year 55 of Ramesses II, had miraculously survived intact." "the wooden coffin within was thought to contain the remains of a man." "Appearances, however , were to be deceptive, as we now know: for despite the named jewels and an anthropoid mask, what Mariette had found was probably not human at all, but an intact (if exceptionally decayed) bull-burial - that of Apis XIV."


In the late 1850's, the burial of the XVII Dynasty King Kamose was unearthed by Mariette's men only to have this find misinterpreted and the kings mummy discarded. Decades later the inscriptions on the coffin were read, and the revelation came of who the lost occupant was.


However, more often than not, the discovery is a ransacked tomb with nothing of value left, except what remains can produce much valuable knowledge for the archaeologist, as is the case in the 1923 find of a tomb containing a group of slain soldiers.


"...the place had been completely plundered ages ago, and had been left strewn with torn linen rags among which had been callously thrown a ghastly heap of robbed and mutilated bodies."


The excavators wanted little to do with this tomb until four years later when it became the discoverers duty to clear the tomb. This clearance revealed that the dozens of mummies were much older than realized and all of the young men, a troop of soldiers who had died in some battle nearly four thousand years ago, and honored with a burial near their king.


In the second half of the 1930's Walter Emery excavating at Saqqara, re-excavated a tomb of a high official of the First Dynasty named Hemaka. Emery discovered that Hemaka's ground level mastaba had been built with chambers within the monument, though these mastabas were usually of solid construction.


Emery went on to discover 45 intact chambers within the superstructure containing objects as they had been left 5000 years before, including in a wood box containing the world’s oldest papyrus book, as it turned out, it was a blank meant for the official to use in his afterlife.


Nicholas Reeves has created a book that is certainly suitable for ages ten and up, being equally of interest to readers of any age. The read is clear and thoroughly illustrated with photographs and vignettes of the discussed material, with many artifacts and excavation photo's not commonly seen.

This is just a handful of choices of the many great discoveries picked by the author for this publication, and I would doubt that too many other authors could do them with the justice, and interest imbued by Nicholas Reeves words in this book on  Ancient Egypt: The Great Discoveries .