The Mummies of Yuya and Thuya 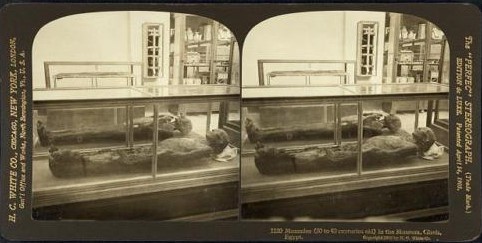 Recently I have been looking at antique stereoviews for material to add to this blog and this is an exciting find. The card is from ca.1908 and the mummies pictured were found just a couple of years earlier in their tomb in the Valley of the Kings which had not been touched in thousands of years and with the contents in a near-perfect state of preservation. The tomb today is known as KV 46 contained the two mummies presented here the parents of the great royal wife of Amenhotep III, Queen Tiye. The mummy of Queen Tiye's mother Thuya is pictured in front with the queen's father Yuya pictured behind. In the background is some familiar pieces of their burial.

Back in the late 1980's author Ahmed Osman wrote the fascinating book "Stranger in the Valley of the Kings" in which the author identified Yuya with the Biblical Patriarch Joseph.

My short book review "Stranger in the Valley of the Kings"
Posted by Timothy Reid at 6:37:00 PM No comments: