The Truth in the Search for Nefertiti 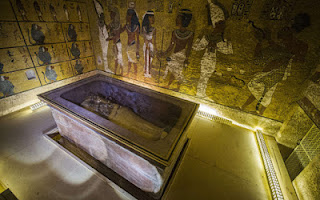 In a very flawed article from the Archaeology News Network, the former head of Egypt's Supreme Council of Antiquities, Dr. Zahi Hawass disputes Egyptologist Nicholas Reeves theory that the tomb of Nefertiti will be found behind the painted walls of Tutankhamun's tomb, in particular, the north and west walls. Part of Dr.Hawass's concern is for the preservation of the paintings which would have to be removed.

The article suggests that behind one wall there will be found a 'mundane' storeroom. Hard to imagine anything 'mundane' about the discovery of a storeroom off the boy king's burial chamber. Cutting apart the paintings is certainly something that will not happen in the near future. With scans of the walls done the next decision may be drilling a small hole in each wall that a camera could look into any void found.

What started me writing this piece, however, was a number of inaccuracies in the article which include that King Ay was Tutankhamun's brother. Ay was an old man, and likely the power behind Tutankhamun's short reign. Ay succeeded Tutankhamun on the throne, and may, or may not have been Tutankhamun's ancestor, through the boy king's queen, Ankhesenamun, the daughter of Nefertiti.

The article moves further along with Dr. Hawass's belief that Nefertiti was likely one of two mummies found in the Valley of the Queens tomb 21. This is in error as the two female mummies in question were found in the Valley of the Kings tomb Kv 21. The mummy known as Kv 21 A, has through DNA found to likely be Tutankhamun's queen, through the fetuses found with Tutankhamun in his tomb.

The suggestion by Dr. Hawass that the torn apart remains of the mummy Kv 21 B is Nefertiti is about as awful as it gets. Mr. Reeves believes Nefertiti is intact while Dr. Hawass is suggesting of Nefertiti that she is represented by a mummy reduced to a sad pile of violated bones in the 19Th century. If DNA has proven that the mummy of Ankhesenamun, Kv 21 A, is the daughter of the Kv 21 B mummy, then it is certainly the worst possible ending to the search for Nefertiti. 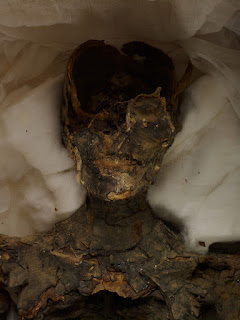