The Royal Tombs of Egypt 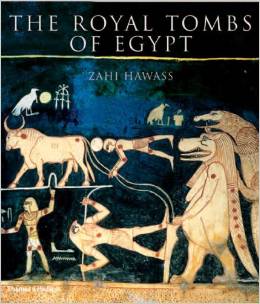 This large book from 2006 is by Dr. Zahi Hawass with photography by Sandro Vannini. The books pictures are stunning with large multi-page pullouts of the decoration found in the royal tombs in Egypt's Valley of the Kings. The folding images also include a nice two-page image of the mummy believed by some, but not me, to be the Pharaoh Ramses I.


The publication opens with the founding of the royal tomb in the Valley of the Kings beginning with the tomb of Thutmosis I. A three-page photograph shows one of the walls in the tomb of Amenhotep III. The grey-blue background color of the wall sets off the six figures of the king greeting the gods and goddess's including Anubis and Osiris, and everywhere the king's names in the cartouches have been destroyed.


Dr. Hawass lays forth the standard of requisite for tombs beginning with the 18Th Dynasty through the 19Th and 20Th Dynasties. The author moves onto the architecture and names of each part of the tomb, as well as the furnishings including the sarcophagus, and canopic chest on down to the king's favorite wine. The gods of Egypt and their attributes are put forward in tomb decoration according to the needs and safety of the deceased king.


Some of the books best content come in Dr. Hawass's explanations of the hours from the book of the Amduat. The various hours are presented to the reader as to the stages of the sun god Re's journey through the netherworld. Accompanying these texts are the beautiful images displaying the relevant hours from a number of the king's tombs in the valley.


The reader is next presented with, The Book of Gates, a document first used in the partially decorated tomb of the 18Th Dynasty King Horemheb, and of which was continued in use through the next two dynasties.


"The sarcophagus of Seti I, which is decorated with a complete version of this composition, shows the Duat in the shape of the arched body of Osiris, bending from the west, where the sun sets, then north, then finally to the east toward the sunrise."


Like the Amduat, The Book of Gates travels through the environs of the hours of the night, passing through gates guarded by serpents whose names must be spoken in order to pass to the next hour. In the fourth hour, the book presents two images of the nine mummies known as the followers of Osiris. These mummies are awaiting in their shrines to be resurrected. One in the tomb of the first king of the 19Th Dynasty, Ramses I, and the other in the tomb of the 20Th Dynasty king's Ramses V and VI.


A little past the halfway point the book likely could be enjoyed by teenagers and up, be that its content is so esoteric, and its photographs so outstanding. From here the Book of the Caverns and the Book of the Earth become even more abstract as the hours of the night have been discarded in these texts, and the names given these books are modern, and even the order of the chapters in one of the books are in doubt.


Here the pages are filled with sublime images from the tombs of Tausert and Sethnakht, and again the tomb of King's Ramses V and VI. In the burial chamber of the latter, the reader is presented with the reconstructed sarcophagus of Ramses VI, a pathetic heap of smashed fragments, and of whose face is in the British Museum.


Next, the author is on to the Litanies of Re which first appears in the Valley of the Kings on pillars in the burial chamber in the tomb of Thutmosis III.


"...it describes the various forms of the sun god, beginning by listing his seventy-five names, and specifically identifies the deceased king with Re and his ba, linked with Osiris. The principal purposes of these texts were the symbolic union of Re and Osiris and the identification of the deceased king with this integrated being, in whom is inherent the power of resurrection."


Another beautiful four-page foldout displays a wall with this theme from the entrance corridor in the tomb of King Seti II. Dr.Hawass moves on to the best known of the books of the netherworld with the Book of the Dead. Vignettes from this text appear on objects found in many of the tombs in the Valley of the Kings including shabti figures, heart scarabs, papyrus's, and shrouds.


Many of Sandro Vaninni's photographs are now of the lovely tomb in the Valley of the Queens of Ramses II's great wife Nefertari, including the seven sacred cows and the bull. In chapter eight Dr. Hawass puts forward a number of other books used in the decorating of the king's tombs with these books being referred collectively as the Books of the Heavens.


The main characters of these books do not include Osiris but revolve around Re, and the goddess Nut, who is known as the vault of heaven. These books can be found on the ceilings of the Ramesside era tombs in the valley displaying one or two versions of Nut stretched out across the ceiling ready to swallow the sun god Re at the beginning of his night journey through her so that she can give birth to him again in the morning. A stunning weathered, and vandalized image from the tomb of King Ramses III shows the king offering incense to the god Ptah.


The author closes his book with the measures that are being employed in the preservation of the Valley of the Kings, and its tombs so that they will not sustain more damage than what has already done. Only a man of Zahi Hawass's stature could have put this book together, with the wonderful photographs by Sandro Vannini, The Royal Tombs of Egypt is a must have for any Egyptian collection.