Ancient Egypt: Kingdom of the Pharaohs 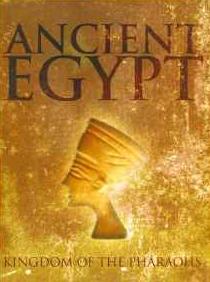 This attractive book is filled with many colored photographs that appear on the majority of pages. The introduction to the book lays down a timeline representing the achievements in Egypt's long history. Unfortunately, I am half way through chapter one and the book has so far been riddled with type set issues. This has me immediately looking at editorial problems that hopefully will not haunt the authors contribution throughout.

By the second chapter, the author is laying out a respectable recanting of the Old Kingdom with its pyramid building god-kings and the first buildings in stone. The format is such that the chapter is broken down opening with a description of the Old Kingdom followed by short sections on some of the highlights of the period. From here most of the rest of the chapter is occupied with nice colored images accompanied by short descriptions that make this book teenage and up friendly.


As the Old Kingdom fell into decline a series of provincial dynasties divided up royal authority with king's ruling often concurrently with each other. This situation ran for well over a century until a prince of Thebes named Mentuhotep II regained control of the entire land. The capital became Thebes, and the god Amun took on national prominence becoming king of the gods.


With the end of the reign of Mentuhotep IV, in the 20Th century BC, a coup appears to have taken place with the kings Vizier Amenemhet seizing power and ruling as King Amenemhet I. This begins a golden age in the arts especially where the art of written composition moved from letters, dossiers, and accounting, to literature containing aesthetic qualities. Among the many colored photographs of this chapter are some unusual objects that are new to me. A sycamore tree from the tomb of Meketre is very beautifully made, while the carved wooden model of a starving man with his begging bowl is very unusual, just to mention two of many.


The end of the Middle Kingdom brought in another period of decline with multiple provincial rulers, and the domination of foreign king's known as the Hyksos. Once again, as in the Middle Kingdom, it is the royal line at Thebes that eventually defeats the Hyksos reuniting the country under one ruler, Ahmosis I. The following line of king's each extend Egypt's borders in the north and the south creating the greatest empire in the countries long history.


The revenues pouring in from Egypt's vassal states enriched not only the king but also huge tributes are given to the god Amun and his priesthood. Each king now outdoes his predecessor in building works particularly at Karnak temple. The pictures contain the usual suspects, though taken from unusual angles with details of monuments, such as a lovely intaglio of the goddess Seshat, who was a chronicler of the pharaoh's inscribing their deeds on the leaves of the Ished tree.


The funerary temple of Hatschepsut occupies much of a page in a beautiful color photograph, except here the temple has only two of its terraces completed. So much tribute is paid to Amun that after nine generations of the 18Th Dynasty the power of the high priest of Amun compares in power to that of the king. It is the dynasties tenth king Akhenaten who rebels closing the temples, and vandalizing Amun's name wherever it is found. The king departs Thebes for a site at Amarna in Middle Egypt where he sets up his capital, establishing a home for his solar deity the Aten. Many images of the unique Amarna period art accompanied with short descriptions occupy the following pages.


Akhenaten's revolution was a failure with the boy Tutankhamun's advisers left to restore royal authority while re-establishing the temples and their priesthoods. The death of Tutankhamun brought an end to the patriarchal line and the next king's obliterated the memory of Tutankhamun and the Amarna kings. A new line of pharaoh's under Rameses I, would temporarily bring back the glory of the 18Th Dynasty.


It is within the reign of the third king of the 19Th Dynasty Rameses II, who lived out Egypt's fleeting glory until his death brought in a period of decline. By the following 20Th Dynasty another nine kings named Rameses finally ended Egypt's period of empire dividing rule between the high priest of Amun at Thebes, and a king named Smendes ruling in the delta.


A remarkable series of images from a number of tombs in the cemetery of the workers village at Deir el-Medina follow. A large photograph in the burial chamber of Pashedu displays the famous scene of him drinking water beneath a date palm. The photograph also gives the view looking out of the burial chamber through crude antechambers to the tombs entrance staircase. Beneath the grapevine of the vaulted ceiling in the tomb of Inherkha there is back to back scenes of the tomb owner worshiping to the left Anubis and to the right Osiris. The scene is beautifully preserved except someone has destroyed the faces of Inherkha and both gods.


The author writes in detailed sections on the daily life of the peoples and their economy, its technologies and commodities, including rituals accorded the individual classes. The reader is presented with a lovely picture of the ivory box created for Ramses IX and found with the king's mummy in the royal cache at Deir el Bahri tomb 320. The Third Intermediate Period brought a division to royal authority with the high priests of Amun-Re  ruling at Thebes, while the most legitimate pharaoh was ruling at Tanis in the delta. The royal prerogative at Thebes faded away after the reign of Pinudgem I until the king's at Tanis held sole authority over the two lands.


A Libyan Dynasty followed with a brief reclamation of glory brought to the office of pharaoh by Sheshonq I, and again a series of foreign and domestic rulers divided up the two lands. The arrival of Alexander the great brought the establishment of a new capital on the Mediterranean, while Alexander's general Ptolemy founded the Ptolemaic Dynasty. Pharaonic history closes with the famous suicide of the last ruler of the Ptolemy's, Cleopatra VII.


The book closes with a section on the most important gods with descriptions of their attributes as well as the place they held to the ancient Egyptians. The spacing errors continued throughout the book but thankfully it alone was the only editing lapse. The authors presentation was of much interest as were the photographs that accompanied the text. The book was a quick read and I might even lower the age of reader down to ten and up, with the book containing a number of unusual details that will interest older readers too.


The value of the knowledge to be found in this book outweighed the ongoing spacing issues to make Ancient Egypt: Kingdom of the Pharaohs well worth a read.
Posted by Timothy Reid at 4:44:00 PM