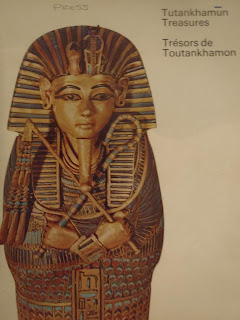 Here I have a press release concerning the 1964-65 tour of Canada creatively named Tutankhamun Treasures and I know if you have ever seen an exhibit of Tutankhamun treasures no doubt you have seen one of these canopic coffinettes, the air miles must be through the roof on this thing. The show appears to have had only a little less than three dozen objects and all of which are small. This tour of Canada was only one of two Tutankhamun exhibitions touring the world at the time to raise funds and donations to help fund the rescue of the temple of Ramses II at Abu Simbel before it descended beneath the rising waters of Lake Nassar after the building of the Aswan high dam.

The venues for the Canadian tour were:

The guide begins with a brief forward by the Director of The National Gallery of Canada, Charles F. Comfort who explains the motivation for the show as well as thanking those who helped with the exhibition. The introduction covers the same issues except for this time it is the United Arab Republic's Minister of Culture and National Guidance Abdel Kader Hatem.

A short history of the life of Tutankhamun and the times in which he lived is well presented by Rudolf Anthes from The University Museum, University of Pennsylvania. This is followed by the objects in the exhibition all of which are represented by black and white photographs

1. Gold Dagger and Sheath found on the mummy of the king
2. Gold Coffinette
3. Gold pectoral inlaid with glass and semi-precious stones with chain and heart counterpoise
4. Gold and blue glass flail
5. Gold and blue glass crook
6. Large scarab of Lapis Lazuli and gold
7. Armlet of gold inlaid in blue and red glass
8. Gold signet ring the bezel which bears a seated figure of Amun-Re found on the mummy.
9. Gold ring with oval bezel containing an image of a boat with two baboons worshipping the moon. Found on the left hand of the mummy.
10. Amulet of Anubis in green feldspar set in a gold frame. Found on the neck of the mummy.
11. Amulet in chased sheet gold of the cobra goddess Wadjet. Found on the neck of the mummy.
12. Amulet of chased sheet gold of vulture goddess Nekhbet. Found on the mummy.
13. Amulet of girdle-knot in sheet gold. Found upon the chest of the king's mummy.
14. An amuletic collar of chased sheet gold of a winged cobra. Found on the chest of the mummy.
15. Walking stick with standing gold figure of the king wearing the blue crown.
16. Gilded statuette of the falcon god Hor-khenty-khem with resin covered pedestal.*
17. Wooden Shawabti of Tutankhamun given to his burial by General Min-nakht.
18. Turquoise blue glass headrest
19. Spouted libation vase in dark blue faience with a white royal inscription.
20. Pear-shaped vase in dark blue faience with a royal inscription in white including the king's throne name and personal name.
21. Dark blue faience cup with Tutankhamun's personal name in white.
22. Alabaster vase with an inner shell and two outer shells carved in openwork of Uraei and lotus flower petals.
23. Tall alabaster vase with inlaid colored faience garlands of lotus petals.
24. Alabaster canopic jar lid of king's head.
25. Alabaster Shawabti.
26. Sandstone shawabti.
27. Alabaster box decorated with black and red inlaid pigments of flowers and cartouches for Tutankhamun and his queen.
28. Alabaster jug.
29. Small wooden box in shape of cartouche and decorated with the king's name in blue pigment.
30. Bronze torch in the shape of an ankh on a wooden base.
31. Pair of linen gloves.
32. Five gold toe stalls found on the mummy of Sheshonk found at Tanis in 1939.*
33. Gold sandal found on the mummy of Sheshonk at Tanis.*
34. Gold bracelet inlaid with glass and semi-precious stones decorated with the eye of Horus and inscribed for Sheshonk I. Found on the mummy of Sheshonk.*

This small collection in the exhibition is certainly not on the scale of exhibits at the 1972 British Museum 50th anniversary show or any of the tours that took place in the 1970's but its purpose was of greater interest and as a result, the temple of Ramses II at Abu Simbel is today safe, and on land overlooking Lake Nassar

* Not included in the exhibition
* Similar to examples in Tutankhamun's tomb.