History of Egypt, Chaldea, Syria, Babylonia, and Assyria Volume I 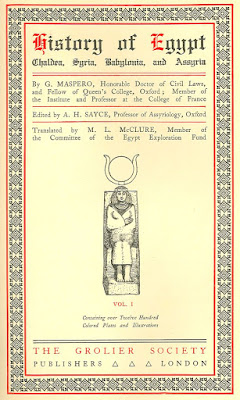 I have had this series of 114-year-old books for many years but never read them. The author Gaston Maspero was the head of Egypt's Egyptian Museum and in charge of giving excavation permits in the late 19th century early 20th century. Mr. Maspero was chief Egyptologist and expert archaeologist of Oriental history. It must be noted that the use of and spelling of English words from 1904 differs from today's vocabulary. It must further be noted that interpretations of Egyptian hieroglyphs particularly names have also changed over the past century.

The book opens with a layout of the course the opening chapter will follow in an overview of the geography of the Nile valley and the course of history that man has existed within this environs and how the early Egyptians used their environment to advantage. Early farmers learned to make use of mud-built canals and dikes to water fields during the inundation season when the Nile floods its banks. The advent of stone tools creates devices for hunting, fishing, spinning cloth and the production of pottery of which upper Egyptian potters created very fine vessels. The reader is presented with the Nile god Hapi who resided in a grotto on the island of Biggeh.

"Hail to thee, Hapi! - who appearest in the land and comest - to give life to Egypt; - thou who dost hide thy coming in darkness - in this very day whereon thy coming is sung, - wave, which spreadest over the orchards created by Ra - to give life to all them that are athirst - who refusest to give drink unto the desert - of the overflow of the waters of heaven".1

Mr. Maspero lays down the basic food crops of vegetables, grains, and fruit like figs to make various kinds of bread and beer and the domestication of various animals. The chapter ends with the various nomes, their main towns and the nomarchs who ruled them. These nomes are in possession of a given god whom the local population worships. The book is filled with drawings of 19th-century photographs and various works of art on most pages. 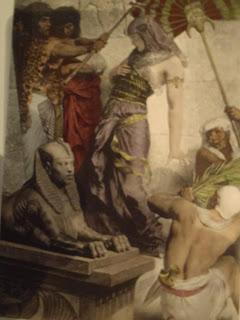 The Guardians of the Temple

The author gives an overview of the many gods and goddess' that were worshiped in ancient Egypt these gods are local deities attached to local fetishes or standards. There are also national gods as in Hapi the Nile god or in later times the rise of the God Amun. Invasion and conquering other nomes would result in the cannibalization of the losing tribe's deity whose powers would be absorbed by the victorious nomes god.

"It was the duty of certain genii to open gates in Hades or to keep the paths daily traversed by the sun. These genii were always at their posts, never free to leave them, and possessed no other faculty than that of punctuality fulfilling their appointed offices. Their existence, generally unperceived, was suddenly revealed at the very moment when the specific acts of their lives were on the point of accomplishment. These being completed, the divinities fell back into their state of inertia, and were, so to speak, reabsorbed by their functions until the next occasion. Scarcely visible even by glimpses." 2

Mr. Maspero moves on to the constellations;

"A world as vast as ours rested upon the other side of the iron firmament; like ours, it was distributed into seas, and continents divided by rivers and canals, but peopled by races unknown to men. Sahu traversed it during the day, surrounded by genii who presided over the lamps forming his constellation. At his appearing ' the stars prepared themselves for battle, the heavenly archers rushed forward, the bones of the gods upon the horizon trembled at the sight of him,' for it was no common game that he hunted, but the very gods themselves. One attendant secured the prey with a lasso, as bulls are caught in the pastures, while another examined each capture to decide if it were pure and good for food. This being determined, others bound the divine victim, cut its throat, disembowelled it, cut up its carcass, cast the joints into a pot, and superintended their cooking."3

The reader is presented with the art and reasons for mummification by the ancient Egyptians. The development from the earliest times in the predynastic mummies naturally dried in their desert graves and the defleshed disarticulated skeletons left from early attempts.

The author moves on to the relationships of the deities to each other including triads of a mother, father, and son though not all gods belong to such groupings. The various traditions of the Enneads are laid out in the earliest dynasties of Egypt and her god-kings.

"Scarcely was Sibu enthroned as the successor of Shu, who, tired of reigning, had reascended into heaven in a nine days' tempest, before he began his inspection of the eastern marches, and caused the box in which was kept the uraeus of Ra to be opened. "As soon as the living viper had breathed its breath against the Majesty of Sibu there was a great disaster- great indeed, for those who were in the train of the god perished, and his Majesty himself was burned in that day."4

Mr. Maspero introduces the advent of the rule of mortal kings beginning with King Menes and the rulers of Dynasty 1 whose graves are at Abydos and were first excavated by Emile Amelineau between 1895 to 1899. Flinders Petrie's re-excavation of the same site was caused by the unprofessional and unpublished excavations and wild theories put forward by the excavator Amelineau now discredited for being little more than a plunderer today.

The book ends with an examination of the early Archaic rulers and their monuments to that of King Zosiri (Djoser) including the content of the" Famine Stela" and the step pyramid which the author puts forward the green glazed tiles in that pyramids apartments are not of IIIrd Dynasty but of Dynasty XXVI.

The book was a difficult read with the changes in the interpretations of the hieroglyphs and the outdated English which the book is written. The book is definitely not for children and those looking for a romantic read, but for those college-age students of Egyptology it is a must read. Everyone else should probably pass on this book.