The Mummy on the Boat 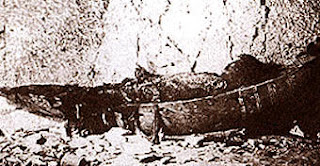 In the summer 2012 issue of KMT magazine, we find on pages 34 and 35 images recently found in Milan's Egyptology archives. One photograph of the mummy on the boat found in the tomb of Amenhotep II in the Valley of the Kings, KV35 displays the position of its left arm.

The mummy was stuck to the boat it was laying on and in 1901 during a robbery of the tomb the mummy was destroyed and the boat was stolen.

In the full page photograph from Victor Loret's excavation of the tomb, we find the mummy's right hand resting on his right thigh. If this is true that will eliminate this mummy from potentially being a king of the New Kingdom.

However when the mummy of the Priest-King Pinugem I, was found the mummy's hands were resting on his thighs, though this mummy appears to have become lost since it's 19th-century photograph.

The mummy may be lying in an appropriate position if he is the Priest-King Herihor whose burial would still have been fresh at the time of the recycling of the Valley of the Kings, though it was his son Pinudgem I that would have been responsible for Herihor's burial and KV35 seems an unlikely place and besides I do not know of any objects bearing Herihor in KV35.

The most obvious choice for this man is Amenhotep II's son Prince Webensenu for which a number of artifacts were found in this tomb but there is another possible contender for this prince. In the side chamber of the tomb were found three mummies two women, one now identified as Queen Tiye and the other King Tutankhamun's mother.

This to me would make this mummy part of those two ladies family even though one of his toes was found in another side chamber in the tomb. That would leave the mummy on the boat as most likely Prince Webensenu?