Tuesday's Egyptian: The Mummy of King Merenre I

Here we have a short but interesting video on the discovery of the Old Kingdom King Merenre I, though it is slightly inaccurate. The early explorers who found their way into the pyramids of the Old Kingdom were on every occasion late comers as visitors in ancient times before had destroyed and removed the mummies and most of the funerary material of all the pyramid king's. A century ago a morbid display in Egypt's national museum was labeled "Fragments of King Unas".


As the founder of Egypt's antiquities service Auguste Mariette lay dying in his tent at Saqqara in January of 1881 his workers were excavating a pyramid at the site when they located its burial chamber. The job to inspect the contents of the pyramid and sarcophagus was left to Mariette's assistants, the Brugsh brothers, Heinrich and his younger brother Emile.


The great discoveries included the hieroglyphs covering the burial chamber walls revealing the king's name who had built the pyramid was Merenre I who reigned from approximately 2287-2278 BCE. One of the last kings of the 6th Dynasty and the Old Kingdom. As the brothers approached the open basalt sarcophagus they found the well-preserved body of a child lying next to it bearing a side lock of youth and without its mandible, but otherwise intact.1 This event has been regarded as the first time the mummy of a pyramid king had been found, if not in his own sarcophagus at least lying next to it. 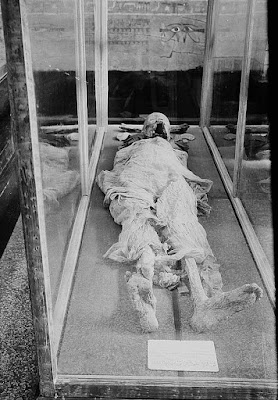 From this point, the discovery turns from scientific find into vaudeville act as the brothers removed the mummy and began carrying it across the hot desert sands of Saqqara. On the way to show Mr. Mariette their discovery the mummy broke into two pieces making it much more convenient for the brothers to carry.


At the time the mummy was believed to be that of Merenre himself, however at some point, it was felt that the mummy was not of the Old Kingdom but the New Kingdom in age, thus the body could not be of that king. Today the pendulum has swung back in the light of more recent discoveries. If it is the mummy of King Merenre I, then it is the oldest known example of the nearly intact mummified remains of an Egyptian king.


Last time I checked the mummy was on display in the Imhotep Museum at Saqqara covered by a sheet leaving only the mummies feet and forehead exposed.

LookLex Encyclopaedia
Posted by Timothy Reid at 12:00:00 AM