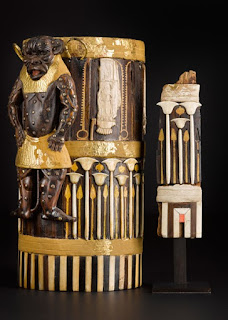 "A result like that which it exhibited when I gained an entrance, if not altogether unexpected, could not be otherwise than vexatious." (1)

This luxurious wooden and ivory perfume box belongs to Scotland's National Museums and was found in a box containing unidentified objects collected by the late archaeologists Alexander Henry Rhind in the National Museum of Antiquities in the late 19th century. It has been speculated that the tomb which it was excavated contained the mummies of the daughters of King Thutmosis IV found by Mr. Rhind while excavating at Thebes in about 1857.

Where exactly the smashed box bearing the name of the father of Thutmosis IV, King Amenhotep II, was found is not clear, however, the late great Egyptologists Cyril Aldred suggested it was among the finds from the tomb that contained the destroyed burial of the princesses. The tomb contained mummies, fragments of tattered cloth, and a number of crude wooden mummy tags. These tags were at one time attached to the destroyed mummies to keep their names with the bodies during processing and burial in ancient times.

"The floors were strewn with bones, torn bandages, fragments-but these not numerous-of mummy-boxes, and (in the lower chamber) with mummies themselves, their wrappings ripped up along the throat and breast. A careful search, which I caused to be made among the debris, only produced fourteen small tablets made of thin wood, about two inches and a half long by two broad, and rounded at the top, each pierced with a hole for the purpose of attaching it to the body."(2)

In his 1862 publication, Thebes; its Tombs and Their Tenants, Mr. Rhind is assisted by the eminent Samuel Birch in the translation of the tags some of which I present here.

It is unlikely that the exact find spot will ever be identified even though Mr. Rhind was decades ahead of fellow archaeologists in his recording of his excavations. The box is of royal craftsmanship from the late 15th century or early 14th century BC.

News from Art Daily on recent findings of other pieces of the Amenhotep II box.
Posted by Timothy Reid at 7:56:00 PM No comments: 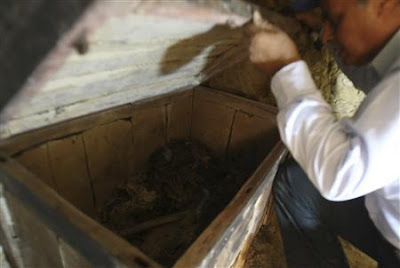 I recently found this old article from eight years ago on what I believe was the last time an intact 2nd Dynasty burial was found in Egypt. The article comes with some fantastic pictures of the discovery.

Sed Festival Block of Akhenaten in the Fitzwilliam

This talatat block features king Akhenaten in two complete scenes including on the left side of the face a crudely carved scene of the king beneath the rays of the Aten. These rays terminate in open hands above the scene of the king before an altar making offerings while wearing the white crown with his arms raised in exaltation.

The second larger scene on the right side of the talatat face is slightly better executed and features the king in Sed festival robes beneath the rays of the Aten which terminate in hands holding alternating ankh signs and was scepters while a row of three attendants is bent over in the background adoring the king. The king strides forward holding his flail and scepter out from his body while the attendants are faced the same direction.

Why would the central focus of the block be complete in the manner of a lesser scenic block instead of it displays one of the most important events in Akhenaten's life? The Sed Festival was important political propaganda and worthy of notice on the walls of his monuments and for an entire Sed festival scene to appear on a single block leads me to ask what the surrounding blocks contained that the king needed to be kept small within his own monument?

Other talatats generally contain only fragments of the royal family as they are of course depicted far larger than their subjects who themselves regularly occupy two or more bricks but the Fitzwilliam piece is far different in conception.

The block is pleasing to look at with the benefit of the contents being of great importance in king Akhenaten's reign, the block being forgivingly damaged where it was probably least important. How would you mount this on a temple wall or even a shrine so as to be set out from the other blocks in the construction?

The damage to the right side of the block makes this illusion that there was a block there unknown. Nothing about the bottom of the block says that there was any connection with a block below and the same is true of the left side which appears to be independent of a block next to it.

But at the same time, it may well be an artists draft to be followed by the artists at the monument if so one would wonder about the misshapen crown and it would be doubtful that this artist would have been in charge of decoration for a larger much more expensive monument.

Though the talatat wall in the Luxor museum from the Gem Pa-Aten displays king Akhenaten 2.5 talatats high with the Aten at the bottom of the above block below the floor line of that block, these blocks are far more central to an overall program of temple decoration and much more finely executed. While a talatat found recently at Sheikh 'Ibada is merely the head and neck of a king's wife from a much larger and dominate scene.*

The other thought is that the block maybe by an artist copying a larger monument on to the talatat as practice but this would seem to be in mistake too as the preciousness of a cut block of stone to be used by an amateur seems unlikely. An important scene in a monument of which would have been hard to discern from surrounding blocks causes me problems and makes me feel the block that has no provenance may well be a forgery perhaps created from a backing cut off another talatat and used to create the Fitzwilliam block?

Let's take the case of the famous forger of Egyptian art Oxan Aslanian who specialized in the art of the Amarna period. While in Egypt between 1900 and 1914 Mr. Aslanian was carving pieces in the style of the Old Kingdom until he moved to Germany where in the 1920's he became inspired by Amarna Period art.

Unlikely the master of Berlin creating fake Amarna pieces in Germany in the 1920's would then send them to Egypt to sell but the possibilities that an early experiment in his art while still living in Egypt may have been some Amarna pieces including the Fitzwilliam piece.

Artists rarely begin at the styles they become known for this is more often than not the result of years of experimentation and the late Mr.Aslanian would have been no different. Unfortunate that Major Gayer-Anderson did not provide anything on the Fitzwilliam's blocks provenance and though not considered to be in the regular style of Mr. Aslanian it's conception is greater than the hand that carved it, a master forger may have been at work on the block.

The idea that the block was created between 1900 and 1914 by Mr. Aslanian is a stretch I realize however master artists are very rare with only a few in each generation especially when they are in the right place. I recently viewed a number of pieces displayed on the Mansoor Collection of Amarna Art website. These soulless pieces are in doubt whether authentic or not, they are however not the work of a master but of a lesser artist who lacks imagination and has only copied other well-known pieces.

The creativity in the Fitzwilliam talatat is clearly above the talents of the Mansoor artist. Furthermore, there are a number of other pieces in the Fitzwilliam that have come from the Gayer-Anderson collection including E.G.A.3077.1943, a block with a man's head which appears the face was carved after the block was broken.

Let's hope further research may someday clear up the lost history of the Fitzwilliam's talatat but whichever way it goes the "Jubilee Scene" 2300.1943 is a wonderful and important work of art.

Photo of block: The Fitzwilliam Museum

Oxan Aslanian: The Shifting Values of Authenticity and Fakes 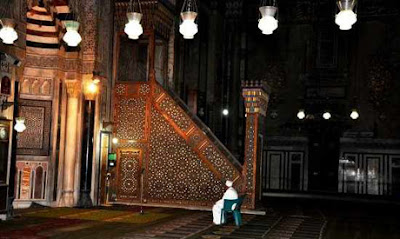 Six heavy large glass hanging lamps have been stolen from the Sultan Hassan Complex and the Al-Rifaai Mosque within. The lamps were stolen from the tombs of king Fouad and princess Ferial without any sign of a break-in. A film crew working around the tombs have been questioned by the authority responsible for the security of the mosque, as has the people responsible for the mosque's security.

The lamps hang more than 4 meters above the floor and are too heavy for one person to carry. The inspection of the remaining lamps has also revealed that one is a replica.

'The stolen lamps are similar to those in situ and are dated to the year 1328 of the Hegira (1910 CE). They are made of opaque white glass embellished with golden enamel and decorated with a Quranic verse from the Al-Nur surah written in Mameluke raised script.

The verse says “Allah is the light of the heavens and the earth. The example of His light is like a niche within which is a lamp.” The stamp of the khedive Abbas Helmy II is also found on part of the lamps.'

Picture from a previous article by Nevin El-Aref from four years ago after another attempted theft of the lamps. The lamps can be seen at the top of the photograph.


The two articles above spell the name of the mosque differently.