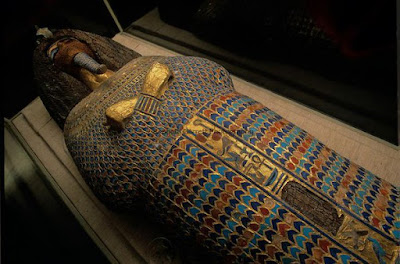 In this photo, we find an image of the coffin found in Valley of the Kings tomb KV 55. Inside was believed to be the mummy of the heretic King Akhenaten. The tomb, like the king it contained, is controversial and only made worse by its poor excavation by men who were capable of doing a much more professional job. Add to the mess no photographs appeared to have been taken during the taking apart of the mummy found in this most outstanding royal coffin that had been found up to that time.

Valley of the Kings tomb KV 55 was discovered on January 6, 1907, by Edward Ayrton and his diggers though it appears that the tomb was not officially explored for three days until January 9. Its first visitors were payee of the excavation Theodor Davis, Davis' excavator Edward Ayrton, and Arthur Weigall, Chief Inspector for the antiquities service in the Valley of the Kings. After this visit work stopped for a few days while the men waited for a photographer to arrive from Cairo on the eleventh. The evidence seems to be that the tomb may have been accessible between the 6th until the morning of the 9th of January, and then a couple more days after until the morning of the 11th of January. The tomb appears to have been closed with only one rough blocking of stones at the entrance built on the rubble of the filling debris. This blocking was in front of the original sealed door of the tomb which had been broken into in ancient times and of which had not been rebuilt. 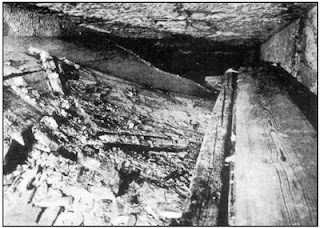 At the other end of the corridor, it appears from the excavation notes that there was no blocking to the entrance of the burial chamber, simply that the limestone chips in which the corridor was filled spilled into the middle of the chamber.

Much of the tombs chaotic appearance was the result of a crack in the ceiling which from time to time brought water in. The result being that the organic material had the consistency of cigar ash including the shrine, coffin, mummy and crushed bier on which the coffin sat. This collapse may have dislodged the rotting coffin lid and mummy inside. A stone falling from the ceiling only added to this damage.

Over the years a number of objects from this tomb have come to light in foreign museums, these artifacts having been stolen at some period before the clearance of the tomb was completed, or perhaps on the way too, or even from the Egyptian Museum itself. The violations to the burial furniture almost certainly began in ancient times when the gold decoration of the shrine and coffin were effaced for someone's interest. The evidence today is showing that though the gold inscriptions have been neatly cut out or erased, that these effaced sheets were not necessarily removed from the tomb as a number of examples were left among the debris presenting their damaged inscriptions. 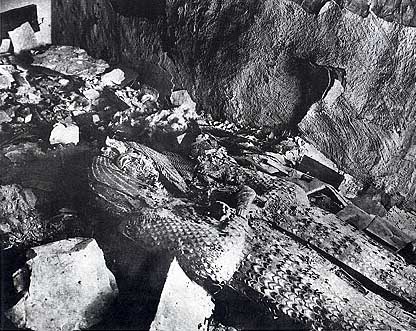 The coffin despite the tearing off of the mask has besides been handled with some degree of care. In no way were the royal symbols attacked as the cobra on the coffins head attests. The beard was untouched and the crook and flail were left present though disintegrated by the time of discovery with the exception of the flails bronze dongles lying on the floor next to the coffin.

The missing cartouche inlay down the center of the lid was likely a jewel made of carnelian or glass to match the color scheme of the coffin. This inlay was not violently hacked at and likely was not destroyed during its removal. Instead, it appears to have been popped out with a sharp instrument which may have left its mark in the wood on the upper right side of the slot creating no damage to the delicate surrounding inlays. 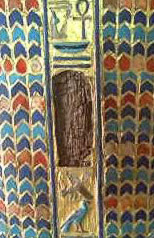 The king's cartouche may have been taken back to the workshops for recycling or removed from the tomb and discarded within the landscape of the valley, or more convenient just left on the floor of KV 55. The jewel in ancient times likely would have been of no importance to the officials present in the tomb if it had the mummy, coffin and shrine would have been stripped of their gold. Now whether it was picked up and re-used by the workers from Deir el-Medina may be determined by the consequences that a worker might face, it may have been akin to theft.

Part of this jewels disguise may be that it is fragmentary with its pieces being in a number of collections. If the cartouche was removed from the tomb in modern times it is likely to be in good condition. That is to say that the cartouche whether fragmentary or whole may be among the materials of those previous explorers to the Valley of the Kings. From the days of the Arab explorations before Napoleon's savants arrived in 1799 right up to the expeditions in the late 20th century.

To me, it would make sense for the stone to be popped out and left on the floor where it fell like the damaged gold sheets. There is the possibility that the jewel was present at the time of the tomb's discovery in 1907 but stolen before it was recorded and may today lie unrecognized in a drawer of a museum or institute of learning