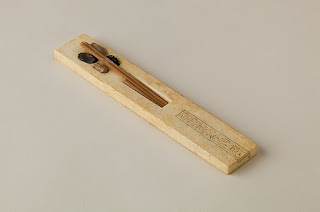 "It was opened in the presence of Lord Cromer, to the great embarrassment - since there had been a general expectation of a more spectacular outcome. Carter determined, in the case of any future discoveries, to make doubly certain of what he had found before making any announcement. In the case of Tutankhamun, it was a strategy which would come back to haunt him."
Nicholas Reeves

This ancient ivory writing palette for princess Meketaten was among the objects bought for New York's Metropolitan Museum of Art in 1926. The palette came from the estate of Lord Carnarvon, the famous financier in the discovery of Tutankhamun's tomb. Meketaten was one of Tutankhamun's half sisters who had died young, apparently first among her siblings. The little princesses funeral being depicted on a chamber wall in the royal tomb at Tell el-Amarna.

Years before the great discovery of Tutankhamun's tomb Lord Carnarvon and Howard Carter were introduced by Gaston Maspero, head of Egypt's antiquities service. The two men spent a number of years excavating together, with their most famous find being a wooden writing palette with part of an inscription copying a then lost stela erected by King Kamose.

The permit was finally granted for the excavations in the Valley of the Kings and through four sparse year's it appeared that Davis had been right the valley was empty. Then came the discovery of the tomb of Tutankhamun in November of 1922. Lord Carnarvon dying famously a few months later before the unwrapping of the boy king's mummy.

In Thomas Hoving's sensational best-selling book of 1978 "Tutankhamun The Untold Story". The author puts forward evidence that a number of artifacts were likely acquired by Lord Carnarvon and Howard Carter from Tutankhamun's tomb. The objects in question are all small wonderful trinkets that the two men may have pocketed for their own collections or that of others. Lord Carnarvon had after all paid for a number of years of excavation in the Valley of the Kings and likely felt was due and entitled to part of the tomb's contents.

These small objects now perhaps in the Metropolitan Museum of Art include an ivory handle in the shape of a horse and a box shaped like a grasshopper. In the past few years, the Metropolitan did return a number of small objects but not the Meketaten palette whose provenance is not helpful, only that it was in Lord Carnarvon's collection prior to his death in 1923. 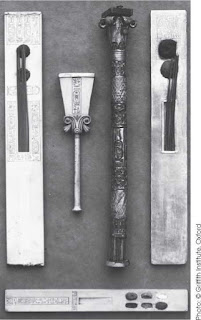 What are the odds that Meketaten's palette came out of Tutankhamun's tomb as a souvenir in Lord Carnarvon's pocket?

It is believed that the first exploration of the tomb was made before the arrival of the antiquities service and that the first party in the tomb consisted of Howard Carter, Lord Carnarvon, and Lady Evelyn Carnarvon.

"...in a draft for an article describing the first impressions and actions of the party, written by Lord Carnarvon but never published, his lordship stated that Howard Carter made an opening in the inner doorway large enough for the party to jump down with some difficulty into the antechamber. Evelyn wriggled in through the tiny hole. Being the smallest in the party, she was the only one who could get through at first."
Thomas Hoving

The idea that each person may have taken a souvenir from that night is not unreasonable, perhaps even probable, I know I would want a souvenir, and Lord Carnarvon had after all paid for the discovery.

However the Meketaten palette came into Lord Carnarvon's collection before his death in 1923 may be obvious or of fabulous coincidence. When Lord Carnarvon's collection of Egyptian antiquities was sold to the Metropolitan Museum of Art in New York in 1926 was the provenance of Meketaten's palette deliberately erased or of no convenient concern to the museum curators at the time. It is not an unreasonable suggestion that the Metropolitan actually has played a role in the denial of its possessions provenance. The gentlemanly sport of excavation in Egypt was not new or so gentlemanly in Lord Carnarvon's time. He followed a long line of aristocrats building collections for themselves and their nations.

There were provisions within his permit for some articles of disturbed burials or/and duplicates to be distributed to the excavators. Even in the discovery of the intact tomb of the royal architect Kha and his wife Merit in1905, nearly twenty years earlier, the contents of the tomb were given almost whole to the discoverer's sponsor, Turin's Egyptian Museum in Italy.

It is within this framework that there is the question of the palettes origins. That more than ninety years later it should not be an obstacle to the truth of the Meketaten palette. The quest for the truth must be of more importance than how the trivial palette ended up on display in New York. The decision to acquire the palette in 1926 may well have been on the dodgy side of market standards which today have no value in the acquisition of objects by museums.

The question being, is it more outrage's to say the palette came from Tutankhamun's tomb or to say it did not?
.