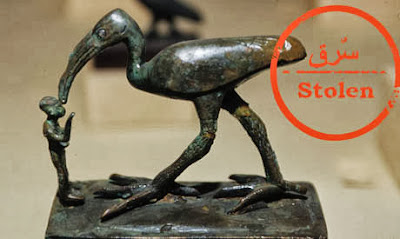 This article from Al Ahram states that 5 more objects have been returned to the the officials of the Malawi museum including this bronze of the God Toth. The even better news is that about 1/5th of the museums lost artifacts have been returned.
Posted by Timothy Reid at 2:43:00 PM No comments: 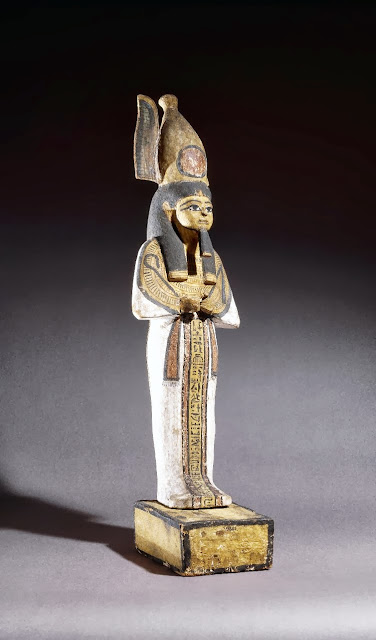 This study is by Anders Bettum for The British Museum of the museums collection of Ptah Sokar Osiris figures. Very interesting make sure you click on the documents to see the pictures of the figures.
Posted by Timothy Reid at 7:03:00 PM No comments:

The Missing Princess of the Malawi Museum 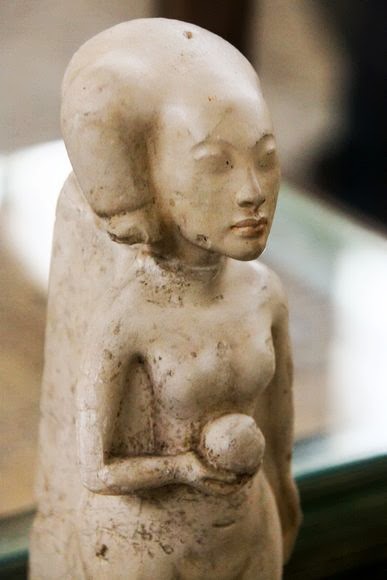 National Geographic has a whole series of excellent images of the Malawi museum before and after the tragic looting of the middle of August. The statuette above is of a daughter of Akhenaten and is among the most important of the missing artifacts. 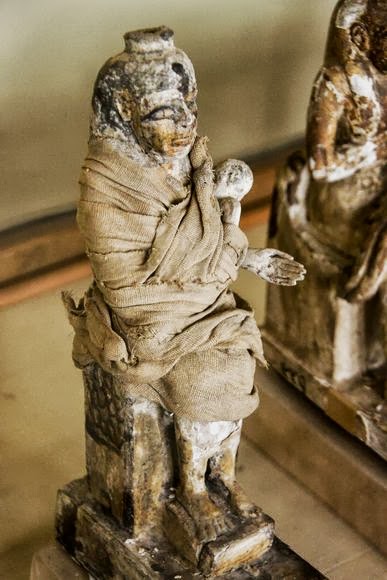 The statuette of Isis and Horus above is among the missing artifacts taken from the museum. There are also reports of more artifacts being returned including a collection of gold coins. 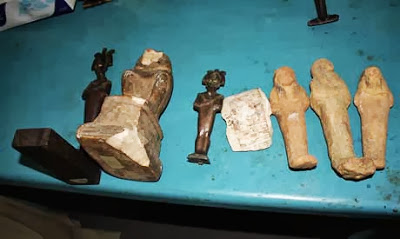 A series of 16 objects that were taken during the robbery of the Malawi museum have been returned though some of the return artifacts have suffered damage which appears in this picture to be the fate of this statuette of the God Toth.
Posted by Timothy Reid at 2:13:00 PM No comments:

Malawi Museum Artifacts to be Restored 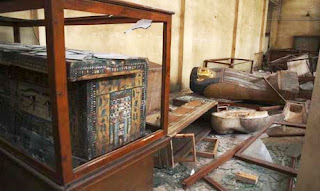 About a dozen damaged artifacts too heavy for looters to carry away and left behind in the Malawi museum including a collection of statues, a number of painted coffins and two mummies have been sent for restoration at the Al-Ashmuonein archaeological galleries.
Posted by Timothy Reid at 8:47:00 AM No comments: 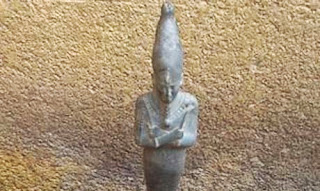 A small good news story on the return of a couple of statuettes of Osiris stolen from the Malawi museum. The Minister of state of Antiquities put out a call to those who plundered the museum to hand over the stolen artifacts without fear of repercussions.

The World Museum Community: Red list of Egyptian cultural objects at risk.
Posted by Timothy Reid at 12:19:00 PM No comments: 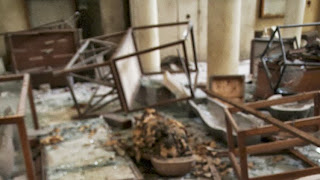 Here is the aftermath of the devastating attack on the Malawi museum, I believe that is a mummy on the floor. 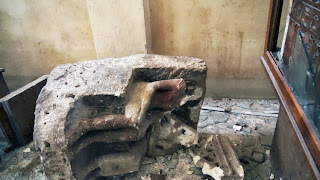 There are also images of a late period coffin among the ruins.

Yahoo News
Posted by Timothy Reid at 6:23:00 PM No comments:

The Simoom Sphinx and Pyramids at Gizeh 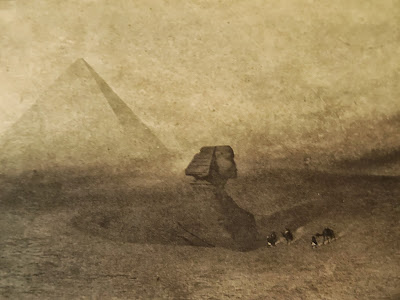 I found this photogravure in my History of Egypt by Gaston Maspero, 1904, Volume 5, pg. 48, but must admit the photo does not do it justice.
Posted by Timothy Reid at 4:35:00 PM No comments: 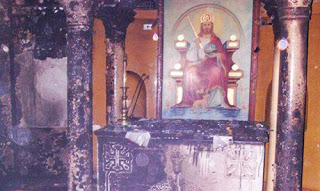 Things are looking worse for Egypt with riots and violence taking hold including the burning of Coptic churches and the damaging and looting of the Malawi museum supposedly of most of its artifacts. Yesterday it was announced that all museums and archaeological sites were closed indefinitely though today the museums were open except for the Malawi museum.

This article on six fragments of ancient Egyptian stonework which were placed for auction at Christie's and found by the auction house to have been recently stolen from Egypt is very interesting.  One of the pieces is referred in the article as having been recently found in context of Amenhotep III and I would imagine it is the red granite fragment above which might be appropriate at the base of a kings throne though it is not the finest grade of art.

Among the pieces is a very poorly carved Middle Kingdom bust of a noble as well as a New Kingdom head of a noble woman represented below. These pieces back in Egypt will be drawer fillers after their use in the stolen objects exhibition even if they are actually fakes?

The generic face of the lady pictured above is in this opinion the least remarkable of the pieces of which its authenticity is of little importance. Perhaps one of the prettiest of the lot is the limestone figure of a cobra perhaps the Goddess Meretseger which would indicate a Theban origin for the piece.

The exquisite fragments composition is full of all the bells and whistles yet upon closer examination it begins to fall starting with that wilting lily, the damage to the horn shown in the photo appears to be the work of a chisel though this vandalism left the orb completely unharmed where one should expect damage to be, with the crown edge on the cobra's head also unaffected by the damage to the horn?  For me this is likely a fake and leads to the possibility that the two previous discussed heads may also be.

Lastly the real artistic treasures of the lots are a raised limestone relief of an official pictured below and a coloured sunk relief of another official.

This piece as the other piece which is also very attractive demonstrates the point that the figure of the nobleman on that coloured piece fits a little too well to the fragment as if carved onto the fragment not a block surface? The above piece also demonstrates this but that in this case of a much more expensive tomb decoration which very few tomb owners could afford should not be all that hard to trace to it's origins of perhaps the 26th Dynasty at Thebes?

Having said this I am confronted by the image that fits the block even perhaps not feeling too great about the hand pictured but the piece is not without its charm including the hammered away figure to the right side which for some reason the person damaging the block did not decide to touch the face or figure on the left side?.

In the appraisal of this small collection of pieces the artistic nature is strong in the types of things you would like to find in a collection of six objects. This is not your typical load of pottery, amulets, coffin and linen fragments, shabti and votive figures that feed the ancient art market but rather that this appears a much more important collection.

If we are to take these six elements as genuine antiquities then the cobra piece does just fine as a sculptures trial piece? The suspected Theban origin hinted at by a number of the pieces is probably not an unreasonable thought as all these pieces are relevant to that culture though does not exclude a northern Egyptian find spot(s).

As mentioned before one or two of the items may have been stolen from excavation(s) storerooms. The question who's storage room or which magazine has been robbed to create this collection or to add to a group of fakes is yet to be figured.

This collection is a big deal and the course of this particular group of objects and who has entered official stores has real potential to expose a criminal ring. I would think the fine folks excavating the mortuary temple of Amenhotep III may want to look in their storerooms!

I recently found this image of the Egyptian galleries at the British Museum in an antique shop and had to buy it. I was told that it had come from a ca.1885 book so I had to have for this blog. The funny thing is that I do not recognize the center head and wonder if it has been removed from display?
Posted by Timothy Reid at 3:39:00 PM No comments: 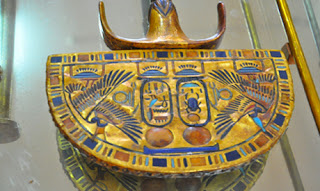 Eight sticks belonging to the collection of artifacts of King Tutankhamun have been transferred from Egypt's Cairo Museum to the unfinished Grand Egyptian Museum's laboratories for restoration. The article says they will be returned to the Cairo Museum after restoration which makes no sense to me perhaps after restoration the sticks should remain at the GEM?