Egypt is in a state of unrest with crowds of tens of thousands of people are gathering in Tahrir square calling for the removal field marshal Tantawi. Clashes with the peaceful crowds and the Egyptian army have resulted in numerous arrests and dozens of deaths among the protesters.

Some wish to bring in the subject of the rise of the Muslim brotherhood in Egypt as a sort of threat that the military is the lesser of two evils? Until last January the west was content to have a dictator as a friend who along with Israel makeup one third of all United States foreign aid with Israel receiving $3,175,000,000US and Egypt coming in second received in 2010 from the United States taxpayers just over $1,550,000,000US. (1)

A full $1,300,000,000US of this money goes towards buying military supplies and weapons from the United States in order for Egypt to keep peace with Israel. Unfortunately those military gifts to Egypt are being used against the peoples democratic revolution going on in Egypt. Please contact your congressman or tell President Obama to stop military aid to Egypt and to put pressure on Egypt's military and particularly field marshall Tantawi to step aside for free party elections.

The Curse of Artemisia 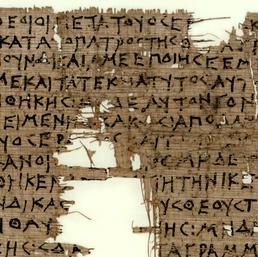 In this papyrus from Ptolemaic Egypt in the 4th century BC, Artemisia`s daughter is deprived of funeral rites and burial by her father. In revenge, Artemisia appeals to the god Oserapis that he may be given the same respect at his death as well as his parents.

The papyrus is in the collection of the Austrian National Library and a part of the World Digital Library.
Posted by Timothy Reid at 2:57:00 PM No comments: 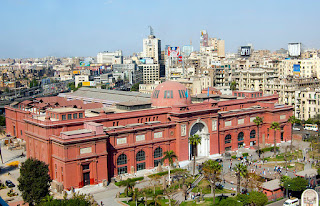 There are rumours that the Cairo Museum has been looted again during the current unrest in Tahrir square. The museums Director Tarek El-Awady has said that the rumours are false and that the museum is open for business and has had 13, 000 visitors in the last few days.

The museum was targeted by a gang of thieves who took advantage of the revolution in Tahrir square to rob the museums Amarna collection. More than 50 objects were taken of  which about half have been returned, some quit dubiously and convenient.

Still missing are most of Yuya and Thuyu`s shabtis several pieces of King Tutankhamun`s statues which were broken during the robbery including a tiny statuette of the king that use to rest on a goddess`head. Also missing are a number of pieces that occupied a cabinet in the Amarna gallery including a stone head of a princess.

Mummy Secrets of the Tomb 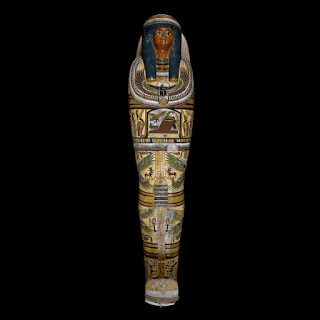 Here we have a traveling American exhibition presented by the British Museum and opening in Richmond Virginia at the Virginia Museum of Fine Arts. The exhibition will run from November 19, 2011, through to March 11, 2012, and display more than a hundred objects including the beautiful 22nd dynasty mummy of Nesperennub which will follow his story in life and in the afterlife.

Nesperennub will not be the only mummy there will also be a cat mummy and artifacts including stone sarcophagus and statues, jewelry and parts of a book of the dead. 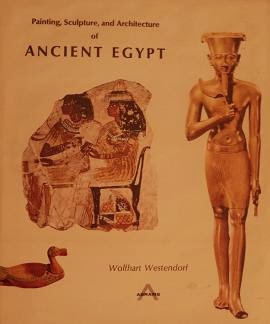 This book is one of eighteen volumes which under the common title of (The Panorama of World Art) explain the history of world art. The book opens with an introduction to Egypt's gods how they came to be and the influence they had on the developing civilization.


The author then lays down the foundations of Egyptian art including the materials available, the intention of the art and its function within the ideals of Egyptian society including the standardization of the art early on in ancient history. Professor Westendorf begins a book which is filled with pictures on just about every page accompanied by a paragraph or two about the objects pictured beginning with the Brooklyn Museum's prehistoric female dancing figure of the Nagadah I culture which while simple contains great beauty.


Each object is given its basic size, material, find spot and museum where the object resides as well as a couple of sentences of insight by the author. The large pictures and choice of objects from around the world is very interesting including many objects I have never seen.


Professor Westendorf imbues his subjects with moments of brilliant insight into the mind of the objects creator. The layout of the book makes for a quick read with wonderful connections created between the objects.


I liked that several of the Pre-Dynastic to archaic period eye makeup palettes are present in the book demonstrating that at such an early period in Egyptian art that the royal craftsmen were producing works of sophisticated highly stylized iconography and for all the beauty the message they send is of aggression and destruction of the king's enemies.


The Archaic alabaster baboon in Berlin is an unusual example of the art of period being in it's earliest stages of carving in the round with the end statue having its arms awkwardly carved. Occasionally objects are given their biographical information while the author remains silent on the object, something I liked very much.


The IVth Dynasty statue of Nofret found next to the statue of Prince Rahotep at Medum has defied time itself a rare object that has the same appearance with its paint intact as it did the day it was finished more than 4500 years ago, she transcends time.


The subject of the book is not only of statues and objects but also the architecture including the hall of columns in Chephren's valley temple at Giza with its alabaster floor with its severe pink granite columns is an agreed highlight in Egyptian art history.


I liked that of the IVth Dynasty portrait heads found almost exclusively at Giza, (though one was found at Saqqara), that the choice picked was Cairo's head from which has had its ears removed? The V Dynasty herd of cattle crossing a body of water from the tomb of Ti at Saqqara presents daily life of the ancient people of the Nile valley in a great splendor of detail.


From Saqqara comes Cairo's VI Dynasty relief of workmen working on statues while two men work with chisels on one statue two other workers are using polishing stones on another statue behind the first. A First intermediate period stelae from the Royal Scottish Museum is something new to me though detailed it's provincialism lacks elegance.


Presented is the beautiful seated Middle Kingdom granite statue of the lady Senuwy found at Kerma in Nubia and now the property of Boston's Museum of Fine Arts.The great thing about old books on Egypt is you get to see the Hatshepsut temple in so many different stages of reconstruction.


The acacia wood head of a king or prince in the Kofler-Truniger collection in Lucerne is a small masterpiece of the XVIII Dynasty and new to me while also new to me are the austere musicians at a banquet in the tomb of Wah (no.22) at Thebes of which the author say's nothing.


Column 61 of the XVIII Dynasty papyrus referred to as the Ebers medical papyrus was composed in hieratic by a confident hand and is an unusual choice from Leipzig`s University library. The 65ft. long papyrus contains 108 numbered columns of medical treatments of various illness` and was purchased by author George Ebers at Luxor in the early 1870`s.


Professor Westendorf then heads into a section on the tomb of Tutankhamun and it`s fabulous furniture though I myself have had too much Tut and was glad the section was brief. The Eighteenth dynasty limestone stelae of Huy from the National Museum of Antiquities, Leiden is amazing as a voyeuristic view of dozens of people attending an afterlife party.


Always loved the carved wood statues of the nobles of the New Kingdom and the elegant XIX Dynasty lady in the Egyptian Museum in Turin is no exception. The lady is in the company of two other figures one of which is a girl wearing a collar and girdle while the other male figure wears a white kilt and is reminiscent of figures found in the Middle Kingdom tomb of Meseheti.


It is a travesty that in Florence's Archaeological museum a wall hacked out of the tomb of Seti I stands with king Seti in adoration of Hathor on a yellow ground. The detail of the god Ptah not in mummiform found in the Valley of queens tomb No.55 for prince Amon-Khepshef is a rarely seen persona of the god.


The author brings great insight into not only the objects but the passing of time within Egyptian society. Interesting professor Westendorf predicts that the exquisite tomb of Ramesses II's chief Queen Nofretari (No.66) " is being gradually destroyed so that the paintings created for eternity will survive in the future only in reproductions."


Very unusual picture of the end of the lid of the sarcophagus of Djed-Hor which displays the transfer of the sun from the day barge to the night barge with Djed-Hor in adoration of the sun god. A relief from the Cleveland Museum of Art of a drummer woman and a woman with a lyre from the Thirtieth dynasty tomb of Hap-iu has an interesting pose for the woman with the lyre.


Professor Westendorf closes the book with the evolution of Egyptian art into the Ptolemaic and Roman periods culminating in the art of the ancient Copt's. Berlin's statue of Horsanebenebef is a masterpiece of late Ptolemaic portraiture and though he is a foreboding figure he is beautifully rendered.


The book was a very easy read, certainly suitable for a 10-year-old though Professor Westendorf's thoughts are deep but well explained by the accompanying photos. Start to finish "Painting, Sculpture, and Architecture of Ancient Egypt" is an excellent telling of the evolution of Egyptian culture over more than 5000 years and exceeded my pessimistic expectations by far!
Posted by Timothy Reid at 5:43:00 PM 1 comment: 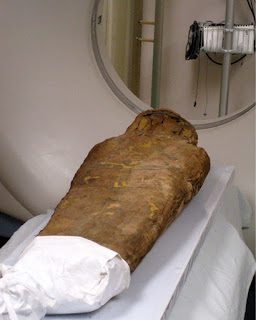 Back in 1989 the Spurlock Museum of the University of Illinois received a donation of a child's mummy from Roman period Egypt. The mummy has been xrayed and now CT. scanned yet still the sex of the child's mummy remains unanswered as does cause of death.

Researchers have found a portrait in the wrappings which appears to be of a male also the mummy has expensive red pigment as part of it's decoration which may indicate the child was from a wealthy family. 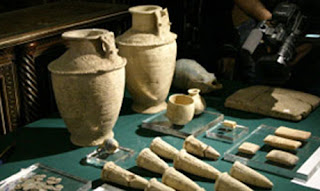 Authorities have arrested a 50 year old man as he attempted to smuggle ancient artifacts out of Egypt. The artifacts are said to be ancient Egyptian and Islamic and if determined to be authentic they will be sent to the Cairo museum.
Posted by Timothy Reid at 12:09:00 PM 1 comment:

The Style of Egyptian Art


I found this short video on the style of Egyptian art and it's consistency over time and found it very interesting.
Posted by Timothy Reid at 8:18:00 PM No comments: