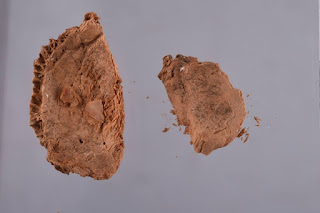 In the middle of June, there was an announcement from Egypt's Ministry of Antiquities about a box found in the basement of Cairo's Egyptian Museum. The contents included some 500 small gold sheets which may have come from the 1907 excavation of Valley of the Kings tomb KV55. In that controversial excavation, a royal coffin was found, unlike anything before that time. The coffin had been defaced with the owners names cut out. The box to be studied may hold these missing names inscribed on the gold sheets. The inscription which runs down the center of the coffins lid contained epithets which are unique to the Heretic Pharaoh Akhenaten. (1)

However, the badly decayed mummy in the coffin has always been a source of debate whether it is Akhenaten or his coregent Smenkhara. These epithets tell us that at one time Akhenaten was at least destined to occupy it. Recent DNA studies have also shown that the skeleton from the coffin is Tutankhamun's father.

In the box along with the gold sheets were two fragments of a skull which may rewrite the cast of the late Amarna royal family. When discovered in the mid-nineteenth century the tomb Akhenaten had created for himself and his family at Tell el Amarna had been ransacked with the burial chambers carved reliefs almost completely destroyed. This included Akhenaten's sarcophagus which had been violently reduced to small fragments.

The two fragments of the skull from the box may be all that remains of Pharaoh Akhenaten with the skeleton found in Akhenaten's coffin being Smenkhara, the father of Tutankhamun. This may explain why there is so little inscriptional evidence of who Tutankhamun's father was. Smenkhara's reign was short, about 3 years and he may even have died before Akhenaten. This explains the limited inscriptions due to Smenkhara's death and Tutankhamun's sudden and perhaps unexpected rise to kingship.