The Great Pharaoh Ramses and His Time: EXPO 86

An Exhibition of Antiquities from the Egyptian Museum, Cairo
At the Great Hall of Ramses II
Expo 86
Vancouver British Columbia, Canada
May 2-October 13, 1986

This is a catalog of a traveling exhibition which made a North American tour between 1985 and 1987 with this stop in Vancouver for the International Exposition of 1986. The catalog opens with the life and legacy of the great pharaoh, especially by the documents left by Ramses II himself in the 67 years worth of monuments he built. 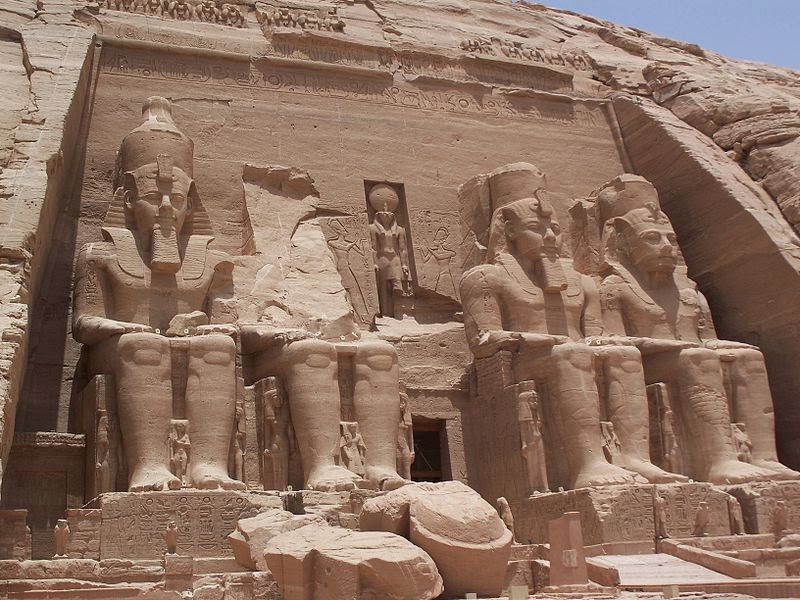 The late eminent Egyptologist Christiane Desroches Noblecourt's opening summary makes the timeline of events which led to Ramses deification of himself in his monuments, particularly at Abu Simbel. The author tells us that Ramses celebrated his first jubilee in year 30 of his reign and that the following year after a royal visit an earthquake struck the monument causing one of the four colossi on the outside of the temple to fall to the ground.

The reader is presented in this short biography with the military deeds, his many wives and more than hundred children, of which his first twelve sons died before Ramses. The passing of Ramses sent his mummy on its tour from tombs in the Valley of kings to his final resting place in the tomb of Queen Inhapy at Deir el Bahri.

The catalog opens with a colossus of Ramses as a votary of Montu and Rat-tawy found at the temple of Armant. The statue is in nice condition which attributes much of its value. The king's face is rounded to represent a solar orb according to the author, but by no means is it anything more than a piece of propaganda.

One of the great unknown finds of Egyptology was the discovery of the sun sanctuary and most if not all of its elements collapsed and buried under centuries of sand near Ramses temple at Abu Simbel. This remarkable and unique surviving sanctuary and its elements are rarely seen except for those fortunate enough to see the Cairo museum or those who saw the exhibition or view elements of it within this guide.

Three column blocks found on Elephantine Island inscribed for Thutmosis IV were reused by Ramses who respected the cartouches of his predecessor while having himself added to them. The color which remains on the column is one of its finest features. 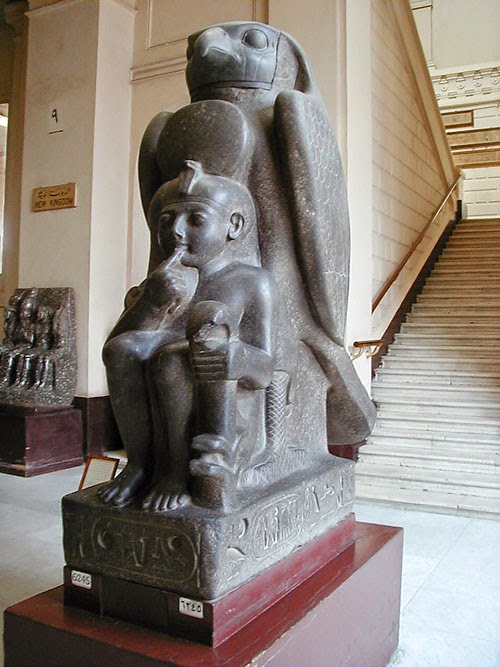 Ms. Desroches Noblecourt keeps referring to Ramses in terms of miracles performed which a skeptic like me might consider propaganda from the ancient king's scribes. Present in the exhibition is the famous statue of the child Ramses in front of the falcon Horus which symbolically spells out the king's name, the statue being one of the great sculptures of the king.

In the next part, the reader is presented with Ramses family on the monuments and represented in the exhibition including the exceptional canopic stopper of the image of the king's mother Tuya , found in her tomb in the Valley of queens in 1972. The Karnak clepsydra (a water clock), of Amenhotep III found in pieces in the water-logged cachet near the seventh pylon at that complex, is a rare instrument to keep the time at night and a copy of an older clock produced during the opening of the 18th Dynasty some 300 years earlier. 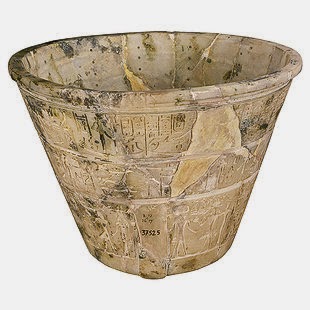 A relief of a parade of bowing officials presents a sophisticated theme from the Theban tomb of a 19th Dynasty nobleman at Asasif. The quality of the fragmentary relief possesses great dignity and a demonstration of orderly ranks of officials bowing to the king. A satirical papyrus of cats serving mice is a delight though not an entirely unique document as a number of these satirical documents is well known.

A series of decorative tiles follow, though not hugely impressive they possess great fluidity of line and color, which when installed in the original rooms of the king's palace must have left the viewer very much impressed by their sumptuous presentation.

In 1906 during the building of a railroad at ancient Bubastis (Zigzag), excavators discovered two caches of treasure created during the time of Ramses and his heirs. This treasure included beautiful bracelets, gold and silver vessels and precious ornaments with perhaps the lapis lazuli and gold bracelets of Ramses being among the best known or the silver jug with a goat handle both among the pieces presented in the exhibition. 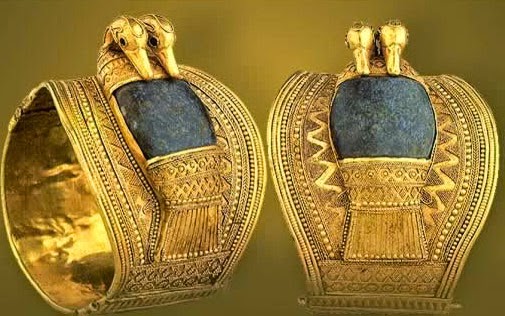 The objects which follow include earrings of gold shaped as poppy flowers and inscribed for the grandson of Ramses, Seti II. These earrings came from Valley of kings tomb 56 and included matching necklace, not included in the catalog.

The famous gold ewer of Ahmose was among the objects present in the exhibition and found in the tomb of the Pharaoh Psusennes I at Tanis by Pierre Montet. The early 18th Dynasty ewer was likely part of a temple deposit acquired by Psusennes for his burial. 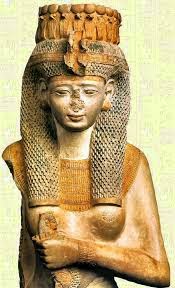 More pieces of gold are presented including a thin gold cup decorated with the cartouches of the descendent of Ramses, Tewosret, who ruled herself as the last king of Ramses II's dynasty. I was surprised to see the stunning statue of the "white queen" included in the exhibition, found in a sanctuary northwest of the Ramesseum in 1896 its white painted surface, lapis blue wig and yellow gold highlights are amazingly preserved.
.
The color pictures in the catalog are gorgeous and of so many of the Cairo museums most important pieces related to the life of the great king, all that is really missing is the mummy itself. Having said this, I had a hard time finding pictures for many of the artifacts from this show that I wanted to my readers to see.

It is quite the sight that so many gold and silver objects from the tomb of Psusennes I was present in the exhibition and its catalog. We pass by a number of precious vessels from  Psusennes tomb till I come to the magnificent cumbersome necklace of that king weighing a little over 23 pounds troy, which the author suggests might have come from one of the figureheads of a sacred bark. 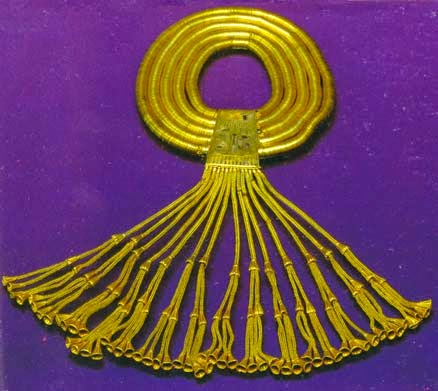 We are presented with two color pictures of a couple of the most important pieces in the show including the lid to the coffin that contained the mummy of Ramses II. Ms. Desroches Noblecourt takes us next to the craftsmen of the royal burials in the Valley of kings with objects found in their tombs at Deir el Medina.

The tomb of Sennudjem from that cemetery was found intact and had not been disturbed since the time the last member of the family was buried. The tomb contained much beautiful material in wonderfully preserved condition and to the readers delight, there are 13 pieces from that tomb represented in the show's catalog.

For me and perhaps the most important find in the tomb was the burial chambers door represented as number 45 in the catalog. This is the only surviving painted burial chamber door in the Theban Necropolis.

The door is painted on the outside facing the visitor with scenes of the family worshiping Osiris and Ptah-Sokar-Osiris on a white background. The side facing the burial has Sennudjem playing a game of senet while his wife holds his arm on a yellow background. Both are seated in front of a table of offerings while below this scene are 11 lines from the book of the dead. 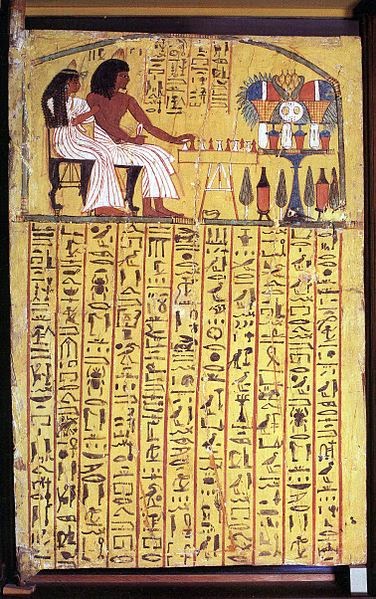 "Beginning of transfigurations and illuminations of the exit and of the return in the necropolis. Be a Luminous one in the beautiful west, so as to go out in the day and do all the transformations one desires (having) played senet, seated under the (papyrus) shelter, (then) go out as a living-soul, by Osiris, the servant of the place of truth, Sennudjem, the justified, and his wife, the mistress of the house, Iyneferty, the justified."

The reader is next onto an example made from bone and ebony wood with pieces made of glazed terracotta. A beautiful limestone canopic box of Sennudjem is styled as a miniature coffin and meant to hold one of Sennudjem's internal organs.

The magnificent sarcophagus of the son of Sennudjem, Khons is a unique surviving example and the best preserved found to date. Yet even more antiquities from the tomb of Sennudjem are presented including a false vase, a shawabti chest and a shawabti of the tomb owner.

Ms. Desroches Noblecourt is next onto toiletries including a bronze mirror discovered at Saqqara in 1860 and a razor from Deir el Medina, a comb, a miniature chest, spoons for cosmetics and a schist fish shaped pallet, as well as khol tubes and pots, complete the ensemble.

The catalog ends with a section on Ramses destiny including two statues of Ramses worshiping gods complete with one of Ramses as a sphinx with an offering vessel of Amun between his hands. Perhaps the exhibitions most important object is the lid to the coffin that contained the mummy of Ramses II. 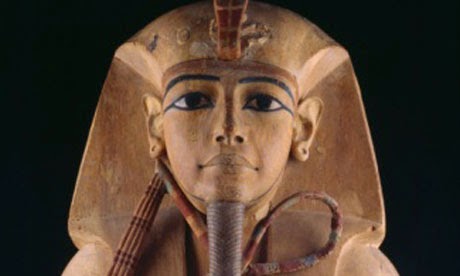 The exhibition ended with an overview of the battle of Qadesh and a black granite bust of the great pharaoh found at Tanis. Ms. Christiane Desroches Noblecourt produced a clear presentation of the life of Ramses II simplified by objects of his time and status.

The many objects from the intact tombs of King Psusennes I and the craftsmen of Ramses tomb in the Valley of kings, Sennudjem were an additional bonus to this extraordinary exhibition on the life and times of the great Ramses II. 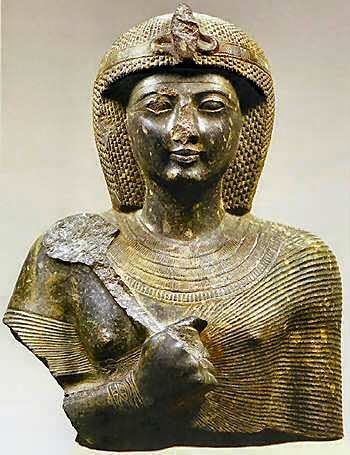