How the Battle of Actium Changed the World

Poor Antony and Cleopatra really peeved Octavian and in 31BC Octavian showed whose boss.

http://www.redorbit.com/news/general/1310842/how_the_battle_of_actium_changed_the_world/index.html
Posted by Timothy Reid at 5:43:00 PM No comments:

I noticed recently that when I aligned the third Amenhotep's year reign of 25 with his successor and namesakes year 1 that a number of curious dates begin to suggest that much of the fourth Amenhotep's reign may actually have run parallel to his father.

It is for me to believe that the head of mummy #61074 in the Cairo Egyptian Museum is actually that of the third Amenhotep than he probably was suffering from his teeth by his reign year 25 and with the early and probably recent death of crown prince Thutmosis the king took on his younger son Amenhotep and made him his co-regent.

Plague may have been raging in Egypt at this time and in year 27 the third Amenhotep buried a number of members of his family a plague sending the two kings to different desert palaces. By year 30 of the third Amenhotep's reign, the elder king deifies himself while at the same time his son is changing his name to Akhenaten.

The suggestion that Amenhotep was the Aten is valid with his son at Amarna, Akhenaten being the soul communicator to the god for his people. The kings year 37 Sed festival may have found the king in grave health unable to attend his own festival worse yet the king may have fallen ill when the guests were already on their way.

A change of venue may account for the unusual 12th year Sed festival of Akhenaten, the idea that Amenhotep's yr. 37 Sed festival and Akhenaten's yr. 12 Sed festivals are one and the same event. Amenhotep III dying in his son's regnal year 13 with Akhenaten dying a mere 4 years after his father. With such possibilities, it is no wonder the frustrations of chronology but mid 14th century is probably still good.
Posted by Timothy Reid at 12:14:00 AM No comments:

City of the Dead

Interesting short video on Egypt's City of the dead. A cemetery dating back to the 14th century.

How and why the pyramids were built is the subject of another artricle.

The beautiful little temple to the Goddess Hathor has been cleaned and restored.

http://guardians.net/hawass/news/Temple_of_Dendara.htm
Posted by Timothy Reid at 11:04:00 AM No comments:

Its a Donkey's Life

Another article on those donkey's buried at Abydos, Egypt. The domestication of animals as I have pointed out before was most likely a mutual arrangement in many cases.

How far back man began to domesticate animals remains still to be solved. I would be inclined to think that such domestication probably began long before we know.

Wherever man or Neanderthal lived they left scraps from their meals that would have attracted mice and other animals. The work of a cat on these small vermin would have been noticed by the humanoid, not to mention the advantage the cat would have hanging around the humanoid. 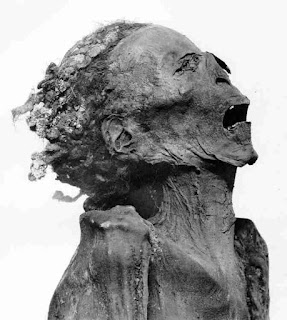 This is the mummy I hear called Pentaware but better known as "Unknown man E". Many of the last one hundred and twenty-five years most famous Egyptologist's have believed that this could be the body of this Twentieth Dynasty prince who was found guilty in a conspiracy to kill his father the last great pharaoh of the New Kingdom, Ramses III.


Whatever happened to Ramses history is not entirely clear however ancient papyrus' tell us that the plot was discovered and those found guilty would have faced a death by impalement with exceptions of the most senior conspirators who like the prince were allowed to commit suicide.


A thirty-one-hundred-year-old court document says that the prince was allowed to commit suicide and no further harm came to him. I would like to point out in the case of "Unknown man E" that having a ritually unclean sheepskin laid on top, and buried in a coffin without a name or the needed spells for his well being in the afterlife represents further harm.


In reality, we will probably never know who he is unless of course "Unknown man E" turns out to be Senenmut which because both Senenmut's mother Hatnofer and his father Ramose's mummies have been found may make DNA matching possible. The science of DNA may identify him among the occupants of the royal mummies cache where the box of internal organs and a tooth of Senenmut's King Hatshepsut was found in tomb DB320.


As time erodes the inscription so erodes the memory of but a few notables and his could end up being some other just as colorful character from the New Kingdom who's identity is now lost to history. Each kings court would have how many courtiers ?


Over the 500 years of the New Kingdom, I would expect dozens of courtiers to have left their courts in disgrace including perhaps Akhenaten, Smenkhkara, Bey, High Priest Amenhotep and possibly Senenmut.


Just to mention some of the most important.
Posted by Timothy Reid at 8:20:00 PM No comments:

A thorough examination of Bolton's Egyptian mummy has revealed that it is probably a prince of Ramsses II dynasty.

http://www.theboltonnews.co.uk/search/display.var.2086238.0.mummys_the_word_for_museum_staff.php
Posted by Timothy Reid at 9:27:00 AM No comments:

http://news.bbc.co.uk/2/shared/spl/hi/picture_gallery/08/middle_east_egypt0s_hidden_treasures/html/1.stm
Posted by Timothy Reid at 2:58:00 PM No comments: