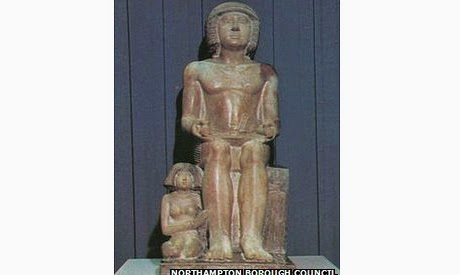 This statue of Sekhemka and his wife from the Old Kingdom's 5th Dynasty 2300 B.C. was a gift from a sultan at the end of the 18th century. The statue has been the museums centerpiece since 1849, certainly the sale of this piece is significant as Northampton will never get another one.

Egypt's antiquities service made its efforts in retrieving it but with no argument the most they can hope for is that they bought it or that it will be gifted to them. Now that the statue has been sold for L16 million the non-issue of the responsibilities of museums should die down.

Museums are about making money and then learning, you have to pay for the books. True the city of Northampton have sold off a treasure but hey L16 million, departing has never been so sweet. 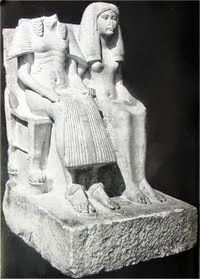 This is a statue of the last king of Egypt's ancient 18th Dynasty Horemheb from his Saqqara tomb seated next to his likely first wife Amenia and sadly this is what it looks like today in Luxor. 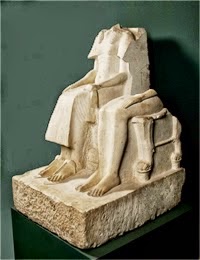 The Egyptian Supreme Council of Antiquities has a number of objects they are looking for beside Amenia including 38 gold mainly Greco-Roman bracelets stolen since the 1970's.

The Egyptian Supreme Council of Antiquities

Top photo: (from Martin, The Hidden Tombs of Memphis) 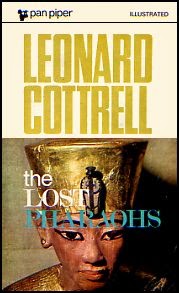 In writing this book the author had the good graces of important men in Egyptology including Sir Alan Gardiner and the Chief Inspector of Antiquities for Upper Egypt Zakaria Goneim. This said Mr. Cottrell admits he is not an expert of Egyptology but rather writing this history on the backs of learned publications.


The book opens with the usual description of Egypt's environment and how its people's culture in the fields of agriculture, writing, religion and art evolved through the early standardization of forms. For these first dynasties uniting the two kingdoms brought together a panacea of local deities likely as confusing to the people of those times as they are today.


Writing fast developed during this period while the arts by the 4th Dynasty reached a beauty of austere lines perhaps never rivaled again in Egypt's long history. Mr. Cottrell presents a rough review of the civilizations history presented accordingly to Manetho's dynastic layout.


Great attention must be paid by the reader as the book is nearly 65 years old and some of its elements are slightly off, as is to be expected. In the second chapter, the reader is onto the arrival of Egyptologists and the discovery of the Rosetta stone which once translated opened an entirely new view of the world of the ancient morbid populace.


At about the same time the hieroglyphics were being translated so too was the cuneiform script which became the diplomatic language of Mesopotamia and Egypt. These discoveries along with libraries of cuneiform tablets have complemented and verified many hieroglyphic texts.


It is an interesting approach taken now by the author as he reveals some of the fascinating archaeological discoveries made in the 19th century which has pushed the knowledge of Egypt back in time, with each discovery filling in the missing periods and in particular the early dynastic period. While still treasure hunters occupied and were allowed to dig sites, with perhaps the greatest destruction of an important archaeological site being the tombs of the kings of Dynasties 1 and 2 at Abydos which the treasure hunter who had the rights to the site stole everything of value he could sell in Paris and having his workers smash objects he did not want.


The reader is presented now with the development of the pyramids from a great mastaba to the stacking of smaller mastabas on top of larger ones creating steps to the straight sided pyramids of the 4th Dynasty. The author is continuously quoting the most important of Egyptologists for his era whom he appears well acquainted with .


Mr. Cottrell puts forward the subterranean structures of some of the pyramids including the galleries of Djoser's step pyramid, but perhaps most interesting is the author's own journey through the corridors and chambers of the bent pyramid.


"Down, down we went, watching the receding square of sunlight getting smaller and smaller until we reached the bottom. We found ourselves standing on the floor of a lofty hall about 20 feet square and soaring upwards to a height of 80 feet."" Up the center of this chamber, the excavators had fixed a series of vertical ladders lashed to flimsy scaffolding." "80 feet above the floor, Abdessalam, (1), pointed to a hole cut in the wall. This was the entrance to a horizontal gallery about two feet square. Along this we wriggled on our stomachs, noting at one point the words 'discovered 1837' left by archaeologist Perring 100 years ago.


At last, we could stand upright. It was very hot in the heart of the pyramid. As we paused to recover breath we saw that we were standing below the entrance to another pyramid chamber, but this one was not so high. With the help of the Arab workers, we have hauled up an almost vertical wall and arrived, very hot and dusty, on the floor of the upper chamber. At a sign from the Director the Arabs held up their lamps and we could see that the ceiling of this room, unlike that of the lower chamber, was rough and broken."


Great lumps of stone had fallen from it, no doubt due to the tremendous pressure of the masonry above, and some of the remaining blocks looked as if they might fall at any moment."


The following chapter on the building of the pyramids brought surprises including an uncomfortable feeling I was getting on how much time Mr. Cottrell was devoting to the great pyramids measurements. To my dismay, the author began spouting the old rabble about how the blocks of the pyramid were cut using bronze saws inset with sapphires and diamonds even though no such device has ever been found.


Considering the estimated 2,300,000 blocks in the great pyramid alone one should expect a number of diamonds or sapphires to become lost among the blocks or in the surrounding sands and the quarries would be filled with gem fragments. To my own understanding, no such gem has ever been found in relation to the building of any of Egypt's pyramids.


After departing this nonsense the author is onto those men who found their ways into the pyramids in modern times. The story of the discovery of the artifacts belonging to King Cheops mother, which were found intact minus the queen's mummy by the Harvard/ Boston expedition is retold.


The reader is next onto the city of Thebes with its illustrious temples bearing columns a dozen feet thick rising 100 feet above the floor.  Mr. Cottrell lingers for a minute on the rich leisurely ladies and gentlemen of a past era, and the trade of the day.


"Instead there is an occasional American couple hurrying down the steps of the Winter Palace with sun hats, cameras and a gaggle of long legged daughters. Here and there a bored Pasha from Cairo fails to conceal an indifference to antiquity which he shares with most of his countrymen."


It is the Chief Inspector for Upper Egypt Zakaria Goneim who shows our author around and over to the city of the dead where we are recounted some of Giovanni Belzoni's experiences while Chief Inspector Goneim takes the author through a number of the finest tombs,  including the tomb of the Mayor of Thebes Sennufer who's tombs ceiling is covered in grapevines.


A group of black and white pictures occupy the center of the book with pictures that are pretty standard though I am reading a paperback. The author turns now to the Valley of kings with a nice description of the descent into tomb of Seti I found by Belzoni in 1817.


It is these tombs of the kings that unlike the tombs of the noble class where scenes on the walls are of the good life the tomb owner wished to live on in the next world, instead, the decoration in the tombs of the kings contains no scenes of happy days but here we find all the spells needed for the well-being of the king and his place on the barque of Re on its journey across the heavens. The exception is the tomb of Ay, a commoner who became king, primarily to fill a void.


Passing this we come into the retelling of the story of the tomb of Tutankhamun, oh joy, yet more-over told events. Having blessedly passed that the author is now on a journey to Tell el Amarna, the city of the Aten where the heretic King Akhenaten took his court and where our guide is still being shown around by Chief Inspector Goneim.


While Mr. Cottrell is on his way, partly on the back of a donkey, he tells the story of Akhenaten and his beautiful Queen Nefertiti. Having visited the city the author is now taken to the tombs of the nobles and on to the kings depressing tomb a few miles behind the cliffs where Professor Sayce a half century before had watched the excavation of the tomb including the discovery of a burned mummy of a man found in the tomb.


With this, we are told about the uncertain future of Egyptology during the middle years of the 20th century with some success in the author's words about the future of the field. An appendix is offered on the reign of Akhenaten and the basic sources which Mr. Cottrell has used in his book.


All in all, I have with the one exception found the book to be a worthy read backed by the authors keen interest of the subject and a list of who's who of the Egyptological elite from his period who have guided Mr. Cottrell into writing a fine presentation on the Lost Pharaohs.
Note:

1) Abdessalam Hussein Effendi-Director of pyramid studies for the Egyptian government, (d. 1947)
Posted by Timothy Reid at 5:51:00 PM No comments: