Here we have a six part program hosted by Dr. Bob Brier on Akhenaten and the world he created. Most interesting to me were the rare images of the mummy of Amenhotep III though it was only one of the highlights of the program.

Nefertiti and the Lost Dynasty

Here we have the show from a couple of years ago based on searching for Nefertiti. As I recall the show was in reaction partially to confront the theory put forward a few years earlier in 2003 by Dr. Joann Fletcher who had published her book "In search of Nefertiti" which had not pleased Dr Hawass who felt that Ms. Fletcher should have made Dr. Hawass aware of her findings before she went to the media as was protocol and so no Joann Fletcher in Egypt.
Some great access to the Amarna royal mummies in this show though I wish the show was not broken into ten pieces.
Breaking protocol is one thing but hey the book was also successful and a great read. Hopefully now that the winds of change have come that Dr. Fletcher will be able to do research in Egypt again.
Also check out "Do we have the mummy of Nefertiti" by Marianne Luban

My Review of "The Search for Nefertiti"
Posted by Timothy Reid at 5:03:00 PM No comments: 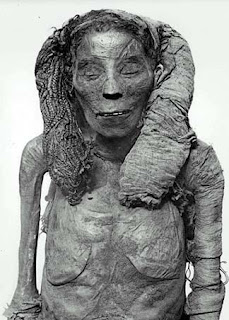 The ancient Egyptians loved their hair styles and wished to be coiffed well for eternity this included the use of fats and resin to set their curls for the afterlife. Unfortunately eternity is a long time and most ended up with severe cases of bedhead not to mention the crudely mannered intruder over the millenniums who for some reason wants to see if they can pull out your hair?

There is mention in the article of scented fat cones we see on the heads of women in tomb paintings though one has never been found to my knowledge?
Posted by Timothy Reid at 2:49:00 PM No comments:

The Continuing Story of Ka-nefer-nefer

The story of the mask called Ka-nefer-nefer in the St. Louis Art Museum appears to be turning on St. Louis in favour of Cairo as the mask clearly is the same mask excavated and shown in excavation photo's of the early 1950's.

Lawyers for the museum are trying anything they can to of course resolve the situation best for the museum but unfortunately the argument of statutes of limitations admits the masks correct provenance but rewards it to the museum anyway because it took too long to discover the crime.

Not likely to happen with the American authorities now involved and The St. Louis Art Museum should expect a visit in the future to hand over the mask. St. Louis' lawyers might spend their time better by suing the art dealer they bought the mask from.

The issue at present appears to be based on what kind of "contraband" the mask is, and what laws apply? St Louis' position gets weaker and weaker. The St. Louis Art museum admits the masks provenance, please go to their site to see the masks provenance according to St. Louis' acquisition.

Here is the background information on the mask:  The Battle for Ka-nefer-nefer

Source of update: Looting Matters
Posted by Timothy Reid at 4:32:00 PM No comments:

There is a study going on at the University of Bonn on a lovely little bottle bearing cartouches of king Hatshepsut. The researchers have discovered from the dried residue inside the bottle that it contains a carcinogenic hydrocarbon which may have poisoned Hatshepsut?

I have heard of the bottle before but have no idea of it's provenance, I would think that just because Hatshepsut's cartouches are on the bottle that it is highly unlikely that it actually belonged to the king? I would think that putting the reigning kings cartouches on objects was how it was probably done at the workshops where objects were created and that it is not necessarily a personal possession of the king?

Very interesting findings though as the ointment in the bottle may have been a product produced for the population and not just the king? It would be interesting to see if residue of the hydrocarbon can be found in any of the royal mummies in Cairo?

This article on the return of objects from New York's Metropolitan Museum of Art back to Egypt. The artifacts are believed to have been taken by Howard Carter from the tomb of Tutankhamun.

The objects removed by Carter were termed by the late Thomas Hoving as a "pocket collection" as all the artifacts easily fit into a pocket and were thus removed from the boy kings tomb . The article has two pictures.

Here you will find background information to the story.

The Carter/Carnarvon Connection
Posted by Timothy Reid at 11:17:00 AM No comments:

The site of the ancient city of Meroe in the Sudan was originally discovered before world war one by famous archaeologist John Garstang who unfortunately never published his findings. Now archaeologist working on behalf of the Royal Ontario Museum have found what they believe to be the oldest building found so far, the newly discovered building may be a royal palace located beneath the ruins of a newer palace.
Posted by Timothy Reid at 11:31:00 AM No comments:

This is an article on the huge dicsovery of the Oxyrhynchus papyri which contained thousands of fragment from Egypt's Greco-Roman period. The collection is so huge that it has been impossible to translate the hoard of documents.

Among the documents found contain many famous lost works by authors like Euripides, Herotudos and Plato.
Posted by Timothy Reid at 11:21:00 AM No comments:

The image probably carved around 3200 bc and was discovered about a half century ago at the site of Nag el Hamdulab by archaeologist Labib Habachi. It is believed to be the oldest representation of a king of Egypt wearing the white crown.
Posted by Timothy Reid at 11:12:00 AM No comments:

The fine folks at Egypt's Cairo museum are a little more relieved today from finding two objects believed stolen during the break in at the end of January. The drawing of the Heset vase really does sum up a broken antiquities department including mismanagement of the national museums ledgers, they could have at least whipped out a box of crayons and coloured it.

Who in the world would break into the Cairo museum and of all it's treasures steal that awful clay bed when the robber could have made more money by stealing one of the museums garbage cans? Now that the Heset vase has been located I imagine it might be a good time to take a proper picture of it, in colour and not blurry.

Certainly the real price paid for the loss of these pieces was the exposure of the museums ledgers to the public eye and particularly the vulnerability of the museums security with the display that Dr. Zahi Hawass was unable to guarantee security for Neues Nefertiti should she have been present, thankfully she stayed in Berlin and missed the robbery of Cairo's Amarna collection.

In all fairness the museum is 109 years old and though it has pulled in untold millions the museum does not appear to be benefited by it. I am not surprised that these two objects have turned up in the museum and based on their appreciative value would suspect that they might have been better off lost!

Vincent at Talking Pyramids has pictures of items recovered.
Posted by Timothy Reid at 7:30:00 PM 2 comments:

It has long been known about objects being in the Metropolitan Museum of Art in New York which came to the museum via Howard Carter and his associates as well as other museums. Mr. Carter appears to have created a collection of pocket sized objects from the tomb of Tutankhamun.

This week the Metropolitan will be handing over more of the pieces acquired by Carter for his as well as his patron Lord Carnarvon's collections.

The Carter/Carnarvon Connection
Posted by Timothy Reid at 12:04:00 PM No comments:

This coming week on August 4 British Museum Curator Richard Parkinson will be discussing the world famous stelea created in 196 bc for the first anniversary of the coronation of Ptolemy V. The stone and it's inscription as well as it's context will be discussed.
Posted by Timothy Reid at 11:34:00 AM No comments: