Complaints are being posted about various problems at Luxor with the management of ARCE . There is a lot to read here but it is quite fascinating and clearly the problems are large.
Posted by Timothy Reid at 3:14:00 PM No comments:

Yet Another Colossal Statue of Amenhotep III

Here we find an image of a rather unimpressive looking monument of Amenhotep III, I suspect it was not reused for a reason, though confusingly the article refers to Amenhotep III as Tutankhamun's great grandfather. This statement is questionable as the known archaeological records says nothing about who exactly king Tutankhamun's father is?

It may be king Akhenaten in which case Amenhotep III would be Tiutankhamun's grandfather and not his great grandfather?
Posted by Timothy Reid at 10:05:00 PM No comments:

A recent visit to Lahoun has revealed damage done by poor excavation practices including damage to a collection of mummies and clay sarcophagi which were not cared for properly. The excavations have been shut down.
Posted by Timothy Reid at 11:25:00 AM No comments: 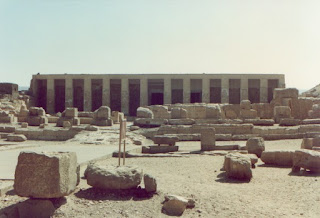 This is a short article on a collection of graffiti scribbled on the walls of the Temple of Seti I at Abydos which are currently being studied and may represent the works of a community of Coptic nuns.
Posted by Timothy Reid at 9:36:00 PM No comments:

Dr Hawass: No Jail and Back to Work

This explanation of the legal goings on in the Egyptian courts against Dr Hawass is from the doctors site and apparently there is good news for him.
Posted by Timothy Reid at 8:16:00 PM No comments:

As many interested in Egyptology will know Andie Byrnes of Egyptology News and Kate Phizackerley of News from the Valley of Kings have been working hard to put together a free site where members of the Egyptological community professional or amateur can participate, communicate and contribute.

As a hint of things to come earlier this year the Egyptological Looting Database 2011 was launched with great success to keep track of artifacts looted during the recent upheaval in Egypt.

All the best wishes to both Andie and Kate and thanks to both for a free and generous contribution to Egyptological studies.
Posted by Timothy Reid at 8:05:00 PM 1 comment:

This is an explanation by Dr Hawass on the current state of legal affairs brought against him, including the conviction.
Posted by Timothy Reid at 7:55:00 PM No comments:

Zahi Hawass Sentenced and Removed from His Job?

There are reports today that the head of Egypt's antiquities service Dr Zahi Hawass has been convicted of corruption and sentenced to a year in jail. Dr. Hawass has also been reportedly fired from his recent appointment as head of antiquities?
Posted by Timothy Reid at 12:46:00 PM 1 comment:

Here we have an article in pictures from National Geographic on scanning of some of Cairo's mummies including Maihirpre found in the valley of kings in the late 19th century. Also particularly interesting the mummy of Hatiay, sadly without picture of the mummy.
Posted by Timothy Reid at 5:36:00 PM No comments:

This is an article on recent research on the skeletal remains found in Kv44 which contained a number of infants and women. The recent research apparently also shows diseases present in many of the remains.
Posted by Timothy Reid at 11:59:00 AM No comments:

Sir David Chipperfield who was responsible for the recreation of Berlin's Neues museum has won the Mies van der Rohe award for 2011. The mid 19th century museum suffered severe damage during WWII and until 2003 was used as storage for the other museums on Berlin's Museum Island.

Reconstruction began in 2003 with the result being a blend of the old 19th century building and the modern restorations.
Posted by Timothy Reid at 10:58:00 AM No comments:

Four objects stolen from the Cairo museum during the revolution have been returned including the copper trumpet and its wood core both are in good shape. Also returned in good shape is one of Yuya and Thuyu's shabti's.

Items returned broken include Tutankhamun's fan and the broken statue of Tutankhamun throwing a harpoon, the boat part of the statue is still in the museum and the statue will be restored.
Posted by Timothy Reid at 9:51:00 AM No comments:

A Broken Statue of Tutankhamun

During the recent Egyptian revolution a pack of robbers entered the Cairo museum stealing and smashing a number of the museums artifacts. The images of the following day included a broken gilded statuette of a feminine king walking on a plinth on the back of a black panther, the kings figure supposed to be Tutankhamun (JE 60715).

When discovered the statue was one of a pair found in a black wooden shrine, the statues wrapped in linen so that those forming the burial of Tutankhamun may not have been aware of their feminine attributes.

There is recognition among the objects in the burial of king Tutankhamun that a number were made for or are of a woman including the aforementioned statuette of a statue(?) Some have suggested that this statue and others representing a female king are actually of Tutankhamun but may also point to there having been a female Amarna king earlier.

To my knowledge in the large amounts of artifacts found in the earlier tombs of Amenhotep II, Kv 35(1), and Thutmosis IV, Kv 47(2), examples were found of similar statues of those kings without evidence of female attributes. Though I have to admit I myself can only find mostly the panther part of the statuettes no doubt the gilded kings were burned for their gold leaf..

Similar remains were also found in the later tomb of Horemheb(3) though these statues do appear there is no evidence they represent female kings including the paintings of the same statues on the walls of Seti II's tomb, Kv15(4).

The idea came to mind that perhaps this female king is not an immediate predecessor of Tutankhamun but an ancestor? With so many objects coming from the boy kings tomb that were property of his ancestors it is hard to identify which ancestor these statues may have come from?

How many of us in modern times are in possession of antique objects from our grand parents or great grand parents or even further back? Can these statues actually represent king Hatshepsut and were possibly rediscovered by the ancients in the family funerary inventory about 140 years after their creation during the burial of Tutankhamun at the end of  the Thutmoside dynasty?

These statues created for the burial of king Hatshepsut and denied burial with her, placed into storage in one of the storerooms that lead to the tomb of Thutmosis III forgotten and stigmatized?

I doubt this and stylistically they appear to be from the Amarna period including the curl of the cobra's tail which is much more common to the Amarna kings and after, while during Hatshepsut's reign the tail of the cobra rises from behind the cobra's hood before curling and travelling to the crown of the kings head. Though there are variations this seem to be most common in the period?

More likely if these statues were not made for Tutankhamun but an ancestor than they may actually have been in (Kv55) at the time the mummy in that tomb was potentially robbed for the burial of the boy king? A point to perhaps Kiya since many believe the coffin and canopic jars in the tomb were originally hers, though I have never quite understood why, I think it is because of the wig on the coffin and canopics found there?

The problem with Kiya is there is no evidence to my knowledge of Kiya wearing a crown of a king of Egypt. This being said the surviving monuments mentioning Kiya  at all are few and some are identified only by style of wig and earrings. It would appear that Kiya is a lesser figure unlikely part of the hereditary line perhaps a grand daughter of Yuya and Thuyu and not likely given the right to portray herself as a king.

Of course one thinks of the king Ankhkepheperure Neferneferuaten (Nefertiti), with the same potential realignment of her position (as Hatshepsut potentially faced a century earlier)during burial with an immediate removal or denial of these statues from the burial of the over achieving kings wife?

There of course is a remote possibility that the woman shown may be Meryetaten but I do not hold out much faith in that rather Nefertiti is the best candidate.

With the end of the eighteenth dynasty royal family and the burial of Tutankhamun a gathering of the families assets, wanted or unwanted probably took place, dividing the remaining family assets into king Tut's burial and perhaps his sisters?

However as a final thought perhaps I am way off and instead of seeing a woman's body or a man's body I should view this statuette as a boy of about 10 with a form of a developing youth and perhaps one of the earliest of the statuettes created for the kings burial shortly after the coronation of the boy Tutankhamun?

During a peaceful demonstration  the demonstrators have been attacked by the army killing two protesters. The result today the Egyptian museum has been closed and there are reports that the museum was used as a place where protesters were tortured during the January revolution.

The Egyptian revolution is clearly incomplete?
Posted by Timothy Reid at 10:41:00 AM No comments:

The good folks at National Geographic have finally added some images of the catacombs that some say contain millions of dog mummies dedicated to the god Anubis. The pictures certainly demonstrate why the catacombs probably interested Jacques De Morgan little.

Interesting though in the level of decomposition of the piles of poorly mummified dogs left here in the late period to the late Ptolemaic period.
Posted by Timothy Reid at 5:31:00 PM No comments:

Here is an article on a study of 52 mummies with the study finding that 44 of those subjects still contained cardiovascular tissue and that 45% of those mummies showed signs of hardening of the arteries.
Posted by Timothy Reid at 9:23:00 AM No comments:

Inauguration of the Hanging Church 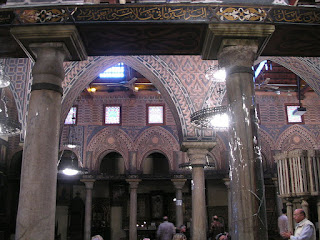 After 13 years of restoration the 4th century Coptic church known as "The hanging church" will be inaugurated in time for Coptic Easter ceremonies. Dr. Zahi Hawass also points out that a number of other museums including the Suez and crocodile museums will be opening soon.

Perhaps instead of creating new museums Dr Hawass may want to protect the museums he already has including the national museum which visitors may still probably enter via the roof, I wonder?

A shameless display of publicity by a man most responsible for the neglect of the monuments!
Posted by Timothy Reid at 12:09:00 PM 1 comment:

Armed gunman broke into a storage magazine at Tel El Dabaa looting many artifacts while leaving a number broken. Archaeologists are now checking the magazine to find out what exactly is gone.
Posted by Timothy Reid at 11:46:00 AM 1 comment: