Discovered in the temple of Deir el Bahari by E. Naville the surviving left side bares inscriptions that credit the shrines creation to Thutmosis II for Thutmosis I, however the nuances of the piece suggest it was actually created on orders of Hatshepsut, this may even be the remains of the ebony shrine created by Thutiy and mentioned in his own tomb inscriptions.

"The good god, Lord of the two lands, lord of offering, lord of diadems, who hath taken the crown of two lands, King of Upper and Lower Egypt, Aakheperenre the son of Re, Thutmosis II, he made it as his monument for his father Amen Re, making for him an august shrine of ebony of the best of the highlands, that she might live and abide for him like Re, forever".

The World of the Pharaoh's, A Complete Guide to Ancient Egypt 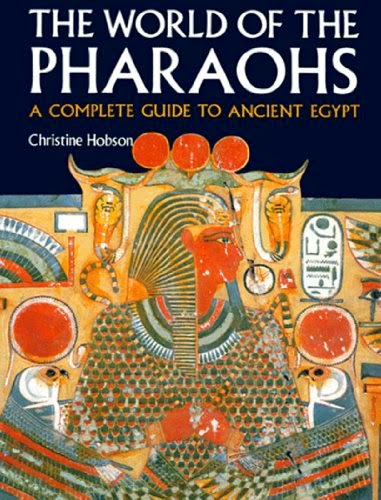 The author starts out strong in its introduction with an interesting overview of Pharaonic history leading into the archaeologists who discovered the various epochs of Egypt's long reign of the Pharaoh's. The lists of Archaeologist and their contribution made the science of today from men like Walter Emery to Amelia Edwards as well as the stars of the field like Belzoni and Champollion.


Chapter three is a bright description of the history of royal tombs focusing mainly on the successive known Kings who created the pyramids of the Old Kingdom. As addicting as the text is the photos are of standard fair though there are some gems like the relief from the tomb of Ankmahor.


The author has a pleasant voice with the simplicity of words that make tough subjects like the Pantheon of gods easy to understand though I must say that there were a number of inaccuracies, Mentuhotep II was not the first king of the 12th Dynasty.


These inaccuracies did not outweigh my interest in the book and the pictures became more interesting as the book went along. The last chapter was as well written completely with a good introduction as to how to read hieroglyphs and the rescue of the Nubian monuments from the raising of the Aswan dam.


But still there were more mistakes in the archaeology and I wondered how many mistakes that had gone over my head. It is hard to criticize a book I liked but the facts go astray while the obvious talent of the author takes away only a little of the books glimmer to me.

The basement of the Cairo Egyptian Museum is being cataloged and here is another article.

http://www.gadling.com/2009/07/26/major-archaeological-discovery-in-egypt-in-museum-basement/
Posted by Timothy Reid at 1:25:00 PM No comments:

Here is another article on the recent finds in the garden of the Cairo Egyptian Museum.

http://www.eturbonews.com/10541/archaeological-cachette-found-egypt
Posted by Timothy Reid at 11:50:00 PM No comments:

From the fine folks at Archaeology magazine comes this article on the CT scan of the Egyptian mummies of the Brooklyn museum.

http://www.archaeology.org/online/interviews/brooklyn_mummies/
Posted by Timothy Reid at 9:37:00 PM No comments:

Not to Forget the Mask of Kanefernefer

The mask from the St. Louis Art Museum is from the Egypt's 19th Dynasty ca. 1250 BC and is its star attraction.The mask was found at Sakkara in 1952, the Cairo Egyptian Museum went looking for it and found it missing from its holdings.

Kanefernefer's mask is worth at auction from about a half a million to a million dollars today, the Egyptian authorities have presented to the directors of the SLAM their evidence including photos of the mask emerging from its burial.

The Slam's directors reject Egypt's claim on the mask. The documents have been presented by Egypt to the international court as well as the International Art Theft Registry. The Egyptian Supreme Council of Antiquities is out to get you St. Louis, now you see it now you don't.

Very good article pulling apart the various provenances and explanations of St Louis's nineteenth dynasty mask and a mask found in the early 1950's and called by its excavator Kanefernefer which is missing.

Out in the Oasis

Here a find in the Daklah oasis

http://www.livescience.com/history/090715-amheida-excavation.html
Posted by Timothy Reid at 5:47:00 PM No comments: The mortuary temple of the 18th Dynasty king Amenhotep III must have been quite the most sumptuous ever created. This king's reign was an artistic high, sadly little more than a century later an earthquake partially destroyed it and a 19th Dynasty king made his funerary monument out of the older monuments blocks.

On the upside, king Merenptah had the blocks turned around and re-carved for himself thus the older carvings were unseen and protected.

http://www.smithsonianmag.com/history-archaeology/egyptiantemple-200711.html
Posted by Timothy Reid at 8:42:00 PM No comments:

In the eastern delta near the Suez canal a fort probably dating to the 7th century bc has been discovered.

A fortified garrison town has been found dating to the reign of Psamtik I at Tell Dafna.

http://www.eturbonews.com/10313/largest-ancient-garrison-found-egypt-s-eastern-delta
Posted by Timothy Reid at 7:38:00 PM No comments:

Archaeologists in the old day's buried antiquities they felt were unnecessary in the garden of the Cairo Egyptian Museum.
Posted by Timothy Reid at 5:49:00 PM No comments:

The Papyrus of Ani

Ani lived during Egypt's 19th Dynasty dying probably around 1275 BC. Though Ani's mummy appears to be lost to history his book of the dead is one of the finest and best-preserved to have come down to modern times.

The papyrus was purchased in 1888 by E.A. Wallis Budge who did not show it to the antiquities service which was the law at the time. The authorities upon hearing of his intentions to smuggle it out of Egypt detained Mr. Budge and took the papyrus away.

Unfortunately, Mr. Budge was released from police custody and somehow got the papyrus back. Escaping with the papyrus before the authorities could arrest him again.

The papyrus was brought to England and given by Mr. Budge to his masters, the trustees of the British Museum. In a show produced a couple of years ago the Supreme Council of Antiquities secretary general Zahi Hawass referred to Mr. Budge as a thief.

Dr. Zahi Hawass has made a career out of getting Egypt's stolen treasures back with mixed success but, Why should he even have to ask for the papyrus back?

Does it not damage the reputation of the British Museum collections as a whole, surely the museum which is run by intelligent people must be able to see Mr. Budge's consciousness of guilt and call into question the museums practices and rights of ownership.

Revenge is a dish best served cold and the SCA's director general is making allot of cold meals with threats to ruin peoples lives. Perhaps the British Museum should do the right thing with objects like Ani's papyrus who's provenance is that of outright theft and who's contributor knew this better than anyone else.
Posted by Timothy Reid at 8:09:00 PM No comments:

The Golden King: The World of Tutankhamun This thankfully small and beautiful book is by the Secretary-General of Egypt's Supreme Council of Antiquities Dr. Zahi Hawass. The book is an excellent read for a younger audience in particular however even the more experienced reader will find new knowledge within the pages.


The photographs are as usual with Dr. Hawass' books beautiful with some of them including that of the pink dog collar found in KV36, the nicest I have seen of those objects. Dr. Hawass recounts the most famous stories including the finding of the royal mummies and the trials of the XXth Dynasty for tomb robberies.


The chapter on the discovery of Tutankhamun's tomb was standard though the chapter on the battle to control the tomb by Carter/Carnarvon and the Egyptians was very interesting though I am already aware that Howard Carter almost certainly stole objects from the tomb which are currently in New York's Metropolitan Museum of Art as well as a couple other museums.


The book ends with an epilog which discusses six objects from the tomb that have not been seen by most people before. I liked this book it was a read that is well suited for the young as well as the experienced with wonderful pictures.


I would recommend "The Golden King" as one of Dr. Zahi Hawass' best.
Posted by Timothy Reid at 7:02:00 PM No comments: