The Golden King: The World of Tutankhamun 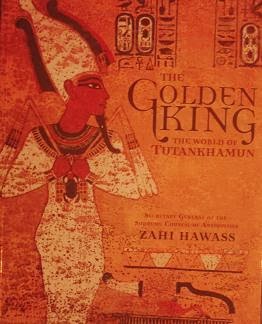 This thankfully small and beautiful book is by the Secretary-General of Egypt's Supreme Council of Antiquities Dr. Zahi Hawass. The book is an excellent read for a younger audience in particular however even the more experienced reader will find new knowledge within the pages.


The photographs are as usual with Dr. Hawass' books beautiful with some of them including that of the pink dog collar found in KV36, the nicest I have seen of those objects. Dr. Hawass recounts the most famous stories including the finding of the royal mummies and the trials of the XXth Dynasty for tomb robberies.


The chapter on the discovery of Tutankhamun's tomb was standard though the chapter on the battle to control the tomb by Carter/Carnarvon and the Egyptians was very interesting though I am already aware that Howard Carter almost certainly stole objects from the tomb which are currently in New York's Metropolitan Museum of Art as well as a couple other museums.


The book ends with an epilog which discusses six objects from the tomb that have not been seen by most people before. I liked this book it was a read that is well suited for the young as well as the experienced with wonderful pictures.