Ancient Egypt Its Culture and History 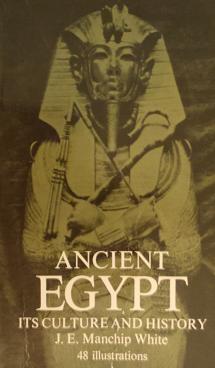 'Pyramids, arches, obelisks,' wrote Sir Thomas Brown with unwonted severity, 'were but the irregularities of vain-glory and wild enormities of ancient magnanimity.'


In the preface to this edition, the author recalls the changing events that had passed since his publication of this book eighteen years earlier. In this, I am reminded that many important things had happened, not least the building of the high dam at Aswan, and the ousting of Egypt's monarchy for a republic.


At first one notices that there are not too many pictures and those presented are in black and white but more interesting is the fold out 'Chronological chart of the Civilization of Ancient Egypt' in the back of the book. Mr. White opens with a rundown of early man and his relationship with the effects the Nile has had on its early inhabitants.


The isolated kingdoms of Upper and Lower Egypt were situated as in Upper Egypt between desert cliffs on either side of the valley until the Nile fans out across Lower Egypt into the Mediterranean. The author moves quickly through his points and soon the reader is on to the role of pharaoh. He is the embodiment of Horus a descendant of the gods and responsible for his people’s ability to live in fair and just peace.


The pharaoh is the falcon who flies to heaven and is transformed into the God Osiris, Lord of the underworld, who then presides over the weighing of souls, whether through indemnity or produce the path looked good for ultimate triumph. It is the priests who carry on the pharaoh’s orders in creating harmony with the necessary production of goods to feed and clothe the population.


Within the passage of time, old truths are often amended by new discoveries, so it is to be expected in a book originally published more than sixty years ago. Detriment, however, must go to the facts being that the Vizier Amenemhat did not found the Eleventh Dynasty, the author places pyramids in the wrong order, and is unaware as to the reasons why the builder of the Bent Pyramid changed the angle for the top of the pyramid.


'Hatshepsut required him to build an imposing monument which would enhance her disputed claim to the throne, and Senmut hit upon a design which lent grace and distinction to the grandiose intention of the building. He sent an expedition to the land of Punt on the Red Sea to procure myrrh trees, while on his airy terraces he disposed palm trees, sacred Persea trees, and papyrus beds. One of his colonnades was devoted to carved pictures of the expedition to Punt, another to representations of the allegedly divine birth of the queen.'


Less than half way through and I am finding many mistakes including the location of the tomb of Thutmosis II, which to this day has never been identified. The author divides his book into chapters of occupation beginning with the pharaoh and working down through priest, architect, craftsmen and commoners. In the occupation of scribe Mr. Manchip White list a number of ancient sources of proverbs including the father of Amenophis I. Likely he did not mean the Eighteenth Dynasty king but meant Amenemhat I, founder of the Twelfth Dynasty.


The Egyptian doctor was highly regarded by the ancients as the most knowledgeable of his kind in the world. Making splints healing infections and dealing with external illness was the specialty of their knowledge along with spells, charms, and chanting. The occupation of the undertaker appears to have been created through oral instructions passed down from one embalmer to the next, rather than written. It also appears that the embalmers investigations played little or no part in the doctors understanding of the human body.


The art of the metal worker reached its peak in the Middle Kingdom at the courts of the kings named Amenemhat and Sesostris. A number of princesses and at least one queen’s burial from these courts have contained delicate masterpieces of gold and inlay that would never be achieved again. Though plagued by mistakes the author does present some good information and hypotheses, even if the black and white photographs are a poor to standard lot


In the crafts such as painting and sculpture, the reader is presented with a distinguished overview that criticizes the classic Egyptian style of painting as a poor cousin to the relief artists who perfected their craft in the Old Kingdom. In this same period, the makers of statuary also achieved a high stature that was only rivaled by the careworn figures of the Twelfth Dynasty kings of the Middle Kingdom and the Saite Dynasty revival of the Late Period.


'Akhenaton-no lover of tradition-bequeathed to posterity a famous and very startling statue of himself as he really was, in all his deplorable sick ugliness. Yet beside this freakish essay in portraiture can be placed 'official' heads of the same Pharaoh which represent him as a comely and attractive man.'


With each chapter, the author begins again at the Pre-Dynastic Period working his way through the long history of the ancient Egyptians. This repetition is somewhat a drawback as it creates little flow in the reading and divides the history into little packets of information that rely on the reader to put into their proper places. Mr. Manchip White believed that ancient Egyptian women were renowned in ancient times for being the adulterates of the ancient world.


There is much about Egypt's relation to the Sinai and Mesopotamia though little about the civilizations relation to Africa. The many errors are not good but the author did have his knowledgeable moments. Unfortunately, Mr. Manchip White's 1950's attitude came repeatedly uncomfortably through in his views on women and his need to judge intelligence in a man based on how light his skin was.


This made for an agonizing read and the desperately wanted to end the book was like a long car journey where the last ten miles till you arrive home takes forever. If you have to not read one book this year, ‘Ancient Egypt Its Culture and History’ is no place to start!
Posted by Timothy Reid at 9:56:00 PM No comments: