Convention Concerning the Protection of the World Cultural and Natural Heritage

"The General Conference of the United Nations Educational, Scientific and Cultural Organization meeting in Paris from 17 October to 21 November 1972, at its seventeenth session,
Noting that the cultural heritage and the natural heritage are increasingly threatened with destruction not only by the traditional causes of decay, but also by changing social and economic conditions which aggravate the situation with even more formidable phenomena of damage or destruction,
Considering that deterioration or disappearance of any item of the cultural or natural heritage constitutes a harmful impoverishment of the heritage of all the nations of the world,
Considering that protection of this heritage at the national level often remains incomplete because of the scale of the resources which it requires and of the insufficient economic, scientific, and technological resources of the country where the property to be protected is situated,
Recalling that the Constitution of the Organization provides that it will maintain, increase, and diffuse knowledge, by assuring the conservation and protection of the world's heritage, and recommending to the nations concerned the necessary international conventions,
Considering that the existing international conventions, recommendations and resolutions concerning cultural and natural property demonstrate the importance, for all the peoples of the world, of safeguarding this unique and irreplaceable property, to whatever people it may belong,
Considering that parts of the cultural or natural heritage are of outstanding interest and therefore need to be preserved as part of the world heritage of mankind as a whole,
Considering that, in view of the magnitude and gravity of the new dangers threatening them, it is incumbent on the international community as a whole to participate in the protection of the cultural and natural heritage of outstanding universal value, by the granting of collective assistance which, although not taking the place of action by the State concerned, will serve as an efficient complement thereto,
Considering that it is essential for this purpose to adopt new provisions in the form of a convention establishing an effective system of collective protection of the cultural and natural heritage of outstanding universal value, organized on a permanent basis and in accordance with modern scientific methods,
Having decided, at its sixteenth session, that this question should be made the subject of an international convention,
Adopts this sixteenth day of November 1972 this Convention."(1)

The colossal head of Ramesses II found a few years back in a modern cemetery in the city of Akhmim along with the sculptures from the temple have been removed from the site and placed in storage for their protection. The temple on the site was described by Herotodus as larger than Karnak temple and no doubt much of the temple still lye's buried beneath.

Since the January 2011 revolution there has been no money to continue excavations and left unprotected locals have turned the site into a garbage dump.
Posted by Timothy Reid at 6:57:00 PM No comments: 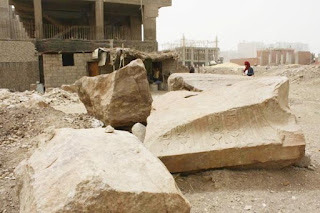 With the loss of much of Egypt's tourist trade comes a lack of resources to properly protect her countless monuments from encroaching buildings , destruction of archaeological sites as well as looting of artifacts. The destruction taking place at Dashur near the 12th Dynasty pyramid of Amenemhet III has been widely reported in the media while the photo in the article of a garbage dump near the Obelisk of Senusret I is truly a sad sight to see. 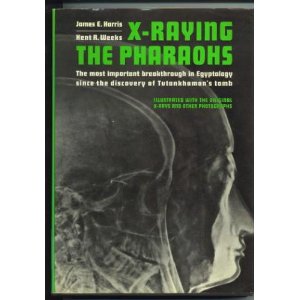 It is hard to believe that 40 years have passed since this landmark study of Egypt's royal mummies, the studies answered many questions which had to that point remained impossible to answer without damaging the precious bodies of the ancient kings and queens in the collection of the Egyptian Museum, Cairo.


The book opens with a portfolio of color pictures which show the color of mummies through various periods of Ancient Egyptian history and right on the first page is a fantastic picture of the extremely fragile 11th Dynasty mummy of the Lady Imenit. The mummy possesses no quality of life in the attitude of her remains though she does possess vast quantities of jewelry about her neck.


These 4 pages of images are followed by many black and white pictures which include many x-rays including a wonderful one of the head of the aforementioned Lady Imenit though her features are difficult to make out in the jumble of her necklaces'. I guess at that time one of the questions scholars most wanted to know was the position of the arms on the mummy of King Amenhotep I who because of his beautiful wrappings has not been unwrapped in modern times.


The x-rays of this king showed that his broken arms were likely originally crossed in front of the body. They also showed a bead girdle on the king just one of a number of unforeseen objects that would turn up on the mummies.


As nice as the artifacts are they are merely bonus' to the intended study of the dentition and bones of the mummies. The reader is presented with an image of the mummy of the rarely seen 19th Dynasty King Siptah and an x-ray of his "club foot" which the author suggests may have been the result of poliomyelitis.


Into chapter one "The Mummy" the author puts forward misconceptions of mummies as frightening creatures waiting to strike and the misguided doctors and druggists who prescribed ground mummy for ailments in centuries past. We are introduced to the royal mummy caches and the two previous studies which had been done on the mummies in those caches by Gaston Maspero and Elliot Smith.


The impetus for the project to x-ray the royal mummies is set out beginning in around 1960 with the building of the Aswan high dam. A call went out to rescue and excavate the sites in Nubia including a number of large cemeteries at Gebel Adda which thousands of bodies were excavated from. James E. Harris an orthodontist and geneticist were hired to lead an expedition on the dentition of the occupants of the cemetery's to judge the health of the ancient people.


The project being a success was carried over with permission of the Egyptian authorities to study upper-class mummies at Giza and Thebes. The project then turned to the mummies in the Egyptian Museum including its collection of royal mummies.


In the first season, small details including the leaded glass cases which held the mummies produced less than desirable results though still impressive enough that in the next season the reluctant keepers allowed the mummies to be removed from their cases to excellent result. Along with the royal mummies, the team x-rayed almost every mummy in the museum but for a couple.


"One member of the staff told us that the attic storeroom had been locked for as long as he could remember-thirty years or more, he said. Stepping over the threshold into two inches of choking dust, we felt like excavators entering a tomb that had been sealed for millennia."


The small attic room was filled with sarcophagi, stacked three deep along the walls, like some ancient embalmer's storeroom. There were forty mummies of the late New Kingdom, high priests, officials and others, all named and in excellent condition."


The purposes of the mummy as the eternal home for the persons Ka and Ba is explained including the development of burial practices from shallow sand burials to coffins with deep rock cut tombs resulting in experimentation from the embalmers of individual periods coping with these evolving problems. Tomb robberies have been occurring since ancient times and not helped when the culture, particularly the upper class' take their belongings with them including much of their wealth.


The author puts forward the examinations of the royal mummies previous and present including a description of how the results of the x-rays reflect on the remains from the earlier mummies of the 17th Dynasty and early 18th Dynasty. The author tells us of their examination of the mummy of King Amenhotep I:


"The x-rays taken by the Michigan Expedition provided the first glimpse of that pharaoh in over 3000 years. The beautiful wrappings were extremely fragile, and there were anxious moments as the workmen carefully placed the mummy under the x-ray unit."


"When the body was removed from its museum case the smell of delphiniums, which had been wrapped with the mummy, was a pungent reminder of how well Egypt's dry climate preserves organic remains."


We turn to the mummies, their histories and the x-rays produced of the great Thutmoside kings up to the body found in Valley of Kings tomb Kv55. We are told the history of the Rammesside kings and the condition of their mummies and x-ray results


We move next on to the mummies of the family of the High priests of Amun and a more sophisticated embalming rituals producing lifelike visages in the 21rst Dynasty. The scale of this project which has led to the examination of Cairo's royal mummy collection has produced findings which will result in the study for many years to come of ancient North Africans from the lowly cemeteries at Gebel Adda to the greatest of ancient Egypt's New Kingdom rulers.


Here we have one of those rare books which should appeal to people across a whole field of personal interests including for those readers 10 and up but for those Egyptophiles, no important collection of Egyptian books could be complete without X-Raying the Pharaohs.