Here are illustrations of Frederik Ludvig Norden in of Egypt and Nubia in 1757.
Posted by Timothy Reid at 7:54:00 PM 1 comment:

Here is a look at the Egyptian collection in the Ulster museum including it's mummy the lady Takabuti. There is a nice video of the mummy in her coffin as well as showing a number of objects in the museums Egyptian collection.
Posted by Timothy Reid at 3:09:00 PM No comments:

The End of an Era?

This article is from "The Economist" on the state of Egypt's affairs leading up to the elections in September 2011, for a new leader to replace the President for the last 29 years Hosni Mubarak. The article says that there is no apparent successor, not something Gamal Mubarak wants to hear.

The term election is used in the as light as possible, as the opposition party is not allowed to put up a representative for the job, only the ruling party and President Mubarak need concern themselves with this decision. The article judges the mood of the Egyptian population and services provided to them including education and health.

The promises of the coup of 1952, when the King was thrown out have never materialized though the secret police have. Today Egypt's dictator Mubarak rules as a King and it may appear to some Egyptians that the fortunes and discontent of 1952 are being repeated.
Posted by Timothy Reid at 3:33:00 PM No comments: 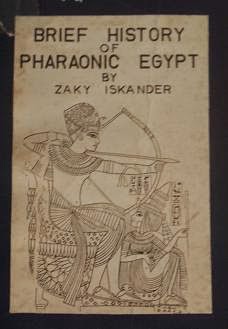 This small book has only 160 pages and can easily be read in a few hours to a day or two. Zaky Iskander deals with Egyptian civilization in chronological order but beginning with the king's lists known as well as the classical sources. The author begins with the stone age and the paleolithic period followed by the neolithic, periods of tool development and agricultural development.


The Predynastic period is represented by the author with the introduction of the Egyptian calendar at 4228 B.C. and clear signs of foreign trade in lapis lazuli and coniferous wood. The author talks about the pottery with wavy handled vessels and others with decorations of boats, humans, and plants.


The book is set with interesting and suitable images and maps though the book is not well printed, it is of tourist handling value. The author is next on to a list of the dynastic period and on to the Archaic period where the author begins with the kings in known order and accomplishments including their known tombs.


Some of the most interesting information the author puts forward are the tombs of these kings and their contents both at Abydos and Saqqara. Though the author is unaware of any known tomb for the 2nd Dynasty King Kha-Sekhem he does recall Manetho said of Sesochris, who is identified as Kha-Sekhem that he was 5 cubits and 3 palms tall, that's 284 cm or about 8.5 feet tall. From here we are taken through the burial customs, writing, and government of the Archaic period.


We are next on to "The Pyramid Period" including the story of Imhotep and the remarkable excavations of Walter Emery looking for Imhotep's tomb but instead found galleries filled with mummified animals, particularly Ibis'. A nice picture of one of these mummies is present though the quality of the printing of the book does not compliment it.


The kings of the 3rd Dynasty are dealt with as is the discovery made in 1954 by Zakaria Goneim of the pyramid of Sekhemkhet and it's empty garlanded alabaster sarcophagus which is pictured. The kings of the 4th Dynasty are listed in order with pyramid building activities and discoveries made by excavators including Khufu's boat.


With the end of this dynasty, Queen Khentkawes marries the high priest of Re at Heliopolis and the title of "Son of Re" is added to the titulary of these rulers. The known history and order of these monarchs are presented as is a description of the great Ennead and the Osirian legend as well as the 1966 discovery of the tomb of the "Controller of Singers", Nefer and the wonderfully preserved mummy left at rest in it.


The kings of the 6th Dynasty are presented with their pyramids in their order with the decline of the old Kingdom and on into the chaos of the First Intermediate Period. The author presents a quick overview of dynasties 7-10 as well as the first half of the 11th Dynasty including the literature of the period.


With the start of the Middle Kingdom, we are next on to the reign of Mentuhotep II and the king's funerary monument at Deir el Bahari including the discovery of the tombs of his queens beneath. Little is said of the kings who follow in this dynasty.


Zaky Iskander moves on to the impressive rulers of the 12th Dynasty and the accomplishments including the building of pyramids and temples and the transfer of the capital to Ithet-tawy. The military expeditions are told as are expeditions to recover materials for building.


The impressive finds of jewels from the tombs of princess' of this dynasty by various excavators are presented. In only a few paragraphs the author brushes past dynasties 13 and 14 of the Second Intermediate Period and on to the Hyksos and the rise of the 17th Dynasty leading to the New Kingdom.


We are here presented with the army and administration of the empire as well as very short biographies of the Kings that follow, you know it is brief when Thutmosis III occupies 5 short pages. Of Amenhotep II the author talks about a stela discovered at Memphis in recent years, of this king with the earliest mention of the Hebrews upon it.


The author says of Akhenaten and Nefertiti "At first she went with him to Akhetaten but later they seemed to have quarreled. They separated, Akhenaten and Smenkhkare' his elder and favorite son-in-law, living in one-quarter of the capital, while Nefertiti and Tutankhaten, another son in law, lived in another. This quarrel could probably have led to the return of Akhenaten to the worship of the god Amun by the end of his reign while Nefertiti did not.".


The kings that follow are labeled as being part of the heretic period and are thus erased by Horemheb who is placed by the author as the founder of the 19th Dynasty. We are told of the accomplishments of the next three kings including the beautiful temples built by Seti I and his son Ramesses II but with little more said of this dynasty. The photograph here of the mummy of Ramesses II is one I have not seen before and probably the best in the book.


Of note in the next dynasty are the reign of Ramesses III and the collapse of society at the end of the New Kingdom with the robberies of the royal tombs in the period of Ramesses IX. From here we are on to the "Decadence period" in which we are presented with some interesting information on the genealogy of the 21st Dynasty families.


The dynasties leading up to the conquest of Egypt by Alexander the great are briefly covered in a few pages. "Brief History of Pharaonic Egypt By Zaky Iskander" was exactly that though I found that it was a good short summary with a couple of interesting and unusual details.
Posted by Timothy Reid at 10:16:00 PM No comments:

Excavations being carried out at Beni-Sueif have uncovered a temple built by the 19th dynasty Pharaoh Ramesses II, 1279-1213 bc. The excavators also have uncovered a collection of terra cotta statues of Isis, Horus and others .

The remains of mud brick buildings from later periods were also uncovered.
Posted by Timothy Reid at 4:29:00 PM No comments: 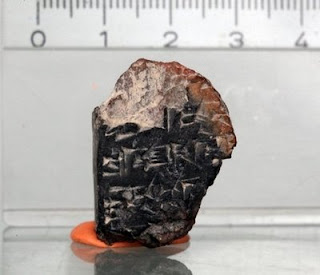 During an excavation in Jerusalem just south of the walls of the old city a clay chip from a 3400-year-old clay tablet covered with the cuneiform script has shown the importance of that city in the late Bronze age. Researchers from Hebrew University said the chip was found in the debris beneath a 10th-century bc tower and was possibly from the royal archives.

The researchers believe it is a royal missive sent by the Canaanite ruler of Jerusalem to the Egyptian Pharaoh Akhenaten and dates precisely to the same period as the tablets found at Tell elAmarna. The clay chip is the oldest example of writing found in Jerusalem and predates the next example by 600 years.

Image courtesy of Hebrew University
Posted by Timothy Reid at 11:45:00 AM No comments:

Dr. Zahi Hawass is putting forward yet again Egyptians doing archaeology in Egypt and being responsible for the protection of the monuments. The doctor explains about past history in excavations without scientific merit and the damage done to her ruins as a result.

Dr. Hawass says of his critics "many of these critics are just hungry for fame for themselves." and then goes on to make a cryptic statement "One, in particular, believes that I do not know him, but I am aware of everything he says.".

The fine doctor drifts on about "holes" and an anonymous person who has criticized his excavations, Dr. Hawass says "I know who this person is and he should go see our excavations in the Valley of the Kings or Saqqara to see the difference between our work and his, which people actually do refer to as holes."

This point mystified me as I was under the impression archaeology was all about holes, I know there were insults there but I was unable to figure out whether it was the men or the science that was insulted?

Dr. Hawass then talks about the shifting of archaeological excavations into the delta and surrounding deserts as well as some changes in the laws of excavation, and again he restates that he does not take credit for the work of others. True though you will have to look past him to see who did the work, a very nineteenth-century approach!

Dr. Hawass brings up proper protocol and how the author of that excellent book "The Search for Nefertiti" broke it! He talks about having his discoveries published and verified as in the case of the recent DNA results of the royal mummies and lastly the standards of those employed under the Supreme Council of Antiquities.
Posted by Timothy Reid at 10:12:00 AM No comments:

Recent excavations at Saqqara have turned up the tombs of a father and son administrators of the Old Kingdom King Pepi II. The tombs which are in fact a tomb within a tomb, are those of Shendwa and his son Khonsu.

The tombs are described as intact though the coffin of Khonsu is not present and that of Shendwa has rotted away. Beautiful limestone vessels were found including jars and duck shaped boxes complete with the offerings bones still inside.

Both tombs have false doors with images of the owners looking like they were painted yesterday. There are also magical instruments including a Pesesh-kef tool for the opening of the mouth and dummy vessels.
Posted by Timothy Reid at 11:38:00 AM No comments: 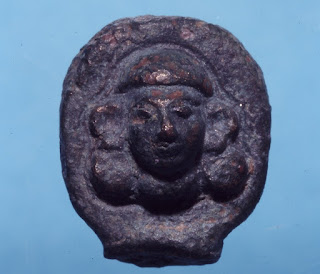 When this Bronze medallion was found in 1997 in an excavation of a house at El Ahwat the nature of the piece was much in doubt. The site being excavated was believed to be 12th or 13th-century bc and perhaps the site of a biblical battle between the Egyptian army and the Israelites.

Now thirteen years later scientist Oren Cohen of Haifa University believes he has solved the mystery in an Egyptian relief of Pharaoh riding his chariot. The relief shows a human faced linchpin in the center of the wheel and may show that the biblical battle took place on the site and that at least one Egyptian nobles chariot became damaged.
Posted by Timothy Reid at 1:18:00 PM No comments: