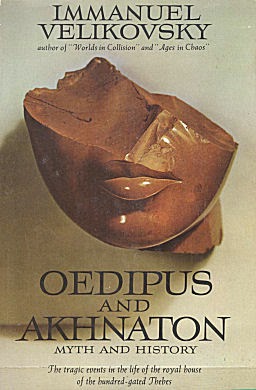 I have recently been dealing with controversial subjects which sometimes cause thoughtful questions, but just as often the writers in question, do a disservice to their readers with nonsense intended only to achieve notoriety for themselves without regard to the cost of credibility, not only to history and the author but also the unsuspecting reader. Immanuel Velikovsky is, without a doubt one of the most controversial writers of the twentieth century on the subject of Akhnaton.


In the forward, the author lays down a background of the books subject figures of Oedipus and Akhnaton and the preparations taken by Mr. Velikovsky to prepare the current work. The book opens with the legend of Oedipus and the various authors of antiquity and modern philosophy who deal with the psycho-analytical nature of the son who kills his father to possess his own mother.


The sphinx is next dealt with, including its emergence from the Old Kingdom and as a monster who destroys anyone who cannot answer his riddle in efforts to save a captive maiden or enter a city or castle to find some treasure. The author turns to the two Thebes of antiquity, respectively in Greece and Egypt, with the various wars of the Greek states and the rise of Thebes in Upper Egypt from the Middle Kingdom to the rise of empire in the New Kingdom and the building of the great monuments of that city to its destruction by foreign invaders.


The kings of Egypt's 18th Dynasty were largely responsible for the monuments especially King Amenhotep III and his principal Queen Tiy who according to the author, sculptures of Queen Tiy as a sphinx are the first representation of a woman as a sphinx in the ancient world, a form adopted by the Greeks etc...


The great monuments of Amenhotep III including his colossal statues show a king of great refinement but also of his devoted wife Tiy, a queen who possessed a unique elevated stature and at times a likely regent for both her husband and son. Mr. Velikovsky informs the reader that in Amenhotep III's old age he had himself pictured in the type of dress worn by women of the period, and in this depiction, the author goes into the inference that Amenhotep was engaged in "Greek love".


Through all of the kings publicity, in no relief, in no painting, and in no statue is Amenhotep III ever pictured with his son and heir to the throne Akhnaton. The author suggests Akhnaton was raised far away from Thebes perhaps in other countries growing up in other royal courts.


Through all the read Mr. Velikovsky is continuously making references to the story of Oedipus, here in the killing of Oedipus' father in reference to Akhnaton damaging of his father's name on Amenhotep III's monuments. The chiseling out of the Amen in his father's monuments and anywhere the gods name could be found had exceptions with one of them being Amenhotep I, whose monuments were not touched.


We are presented with a section of black and white pictures of which the most interesting is a sphinx of Hatschepsut at Deir el Bahri. Akhnaton's title "Living in truth" is next explored as it is unique to this king and may denote Akhnaton's rejection of evil, or wrong doing to himself, perhaps as a result of the rejection of his father and an oracle.


We are told that in year five of Akhnaton's reign he moved his residence from Thebes to his new capital Akhetaten. Mr. Velikovsky describes the layout of the city including the guards post.


" chariotry always ready for action on an instant's notice. Roads were always kept open for the wheeled vehicles of the flying squad. In the south were the estates and mansions of the vizier, the high priest, the commandant, the master of the horses, sculptures' quarters, and not far from these were ateliers for glassmaking.


In the North City were mansions and the North Palace, with beautiful wall paintings of bird life in the marshes; on the palace grounds were fishponds and aviaries and stables."


Mr. Velikovsky takes time out to criticize the actions of the German archaeological team who excavated the site in 1912, acquiring the famous bust of Nefertiti now in Berlin's Neues museum when it should be in Cairo. The author is next on to the two groups of sepulchers carved in the faces of the surrounding cliffs at Tell el-Amarna , one group to the south, the other to the north of the city.


The construction of these monuments is explored as are the owners and the carvings on the walls. These monuments have been long known about from their obvious presence in the cliffs while the city below was unknown to past explorers before excavations.


The owner of one of these tombs is a man of low origin named Parennefer whose tomb was carved out near that of the high priest of Aton. Geman Egyptologist, H. Ranke said of Parennefer,


"It appears that the favors are given to him because of some old relation to the king whom he served when the latter was an infant. He was apparently a simple servant" this servant "with clean hands"; he was made equal to the noblest of el-Amarna."


With this Mr. Velikovsky turns to the servant who saved the life of the infant Oedipus by not abandoning him in a wasteland, instead giving the baby to a herdsman and his wife to raise. The finest tomb in the necropolis was cut for a man named Ay, of whom we are told is Tiy's brother, and who went on to be king after the death of Tutankhamun and of whom the author relates to Creon in Oedipus Rex.


The arrival of King Akhnaton's mother Tiy to Amarna creates a division with Nefertete for the position of the chief queen with Nefertete reduced to a concubine of the harem disappearing  from the record in year 12. We are next onto Princess Beketaten who possess a different title than Nefertete's daughters who are pictured with their mother while Beketaten always appears by Tiy's side, bringing the author to the conclusion that she is the product of an incestuous relationship between Queen Tiy and her son Akhnaton.


We are told of an unnatural relationship between Akhnaton and the handsome young Prince Smenkhkare who Akhnaton allowed to be his co-regent for a year or so. Akhnaton having had relations with his mother and the young prince now turns to his third daughter Ankhesenpaaten who gives birth to a young girl that dies shortly after.


Mr. Velikovsky now turns to the blind seer in the Beotian Thebes, Tiresias who was an old man in the days of Oedipus and his sons. The author is convinced that the Egyptian seer Amenhotep, son of Hapu, a wise sage who lived during the reigns of Amenhotep III and who would have been an old man during the reign of Akhnaton is the Greek Tiresias, instrumental in the downfall and exile of Oedipus/ Akhnaton.


The author points out the similarities between Tiresias and Amenhotep, son of Hapu who was regarded by later ages as a patron to the blind and honored with a mortuary temple by Amenhotep III. We turn to a chapter on the blind king, Oedipus who became blind and was later deposed and sent into exile by his sons.


There are a number of scholars pointed out by Mr. Velikovsky who believe Akhnaton became blind at the end of his reign. We are introduced to the excavations of Theodore Davis in the Valley of kings including the discovery of the tomb of Queen Tiy, Valley of kings tomb Kv55.


The damp tomb contained the burial furniture of Tiy but the mummy in the coffin was a young man, who may have been hidden with Tiy's furniture in order to disguise the identity of the mummy from the followers of Amun. Once again in literature, the reader is made to endure yet another telling of the discovery of the tomb of King Tutankhamun.


The two mummies skulls, Tutankhamun and Kv55 mummy are compared to reveal that they are likely brothers. The author tells the reader further that on the gold foils found covering the Kv55 mummy were repeated inscription saying "Beloved of Akhnaton", not a title you would find on Akhnaton's mummy but rather identifying the mummy to be Smenkhkara.


In these identifications, our author believes he has found Oedipus' two sons Polynices/Smenkhkare in Eteocles/Tutankhamun who ruled one after another being controlled by the elderly Creon, the younger being used by him to usurp the throne of his older brother. Creon goes further in his first proclamation that Polynices should remain unburied for the wild animals to drag away, while Eteocles would be buried with all the dignity of a sovereign.


Near the tomb of Tutankhamun is a pit known today as Valley of Kings tomb 54. The pit measures only six feet deep and when found early last century contained an assortment of linens, cheap dishes and the remains of a banquet said to belong to the funeral of Tutankhamun in large sealed jars.


We are told that the find is unique and that the jars were not from a funeral party but filled by with the remains of many meals from Antigone who Creon held a prisoner in the pit with provisions provided to keep her alive. She had defied Creon's order that Polynices should be left to the wild animals and had hurriedly buried him in a cave, Valley of kings tomb 55.


If the story is true then the sister who buried Polynices/Smenkhkare and who died imprisoned in Valley of kings tomb pit 54 must be Ankhnaton's eldest daughter and Smenkhkare's queen, Meryetaten . Now that Creon/Ay has disposed of Polynices, Eteocles and Antigone he can now claim the throne and create his own royal tomb in the Valley of kings Kv23.


Ay's tomb has a number of unique features in it particularly the destruction caused to the walls and the smashing of Ay's sarcophagus, Ay like Creon was thrown out of his tombs and the burial destroyed. In the end, Oedipus' mother Queen Jacosta/Tiy commits suicide in grief over her incestuous relationship with her son Oedipus, the result that the Queen Tiy was denied a decent burial in the valley.


Mr. Velikovsky delves into the themes which provide that the events of the Amarna royal house based in Egypt at Thebes which in time and Greek authors turned the story to the Beotian Thebes.The book ends with a psychological assessment of Oedipus by the author as well as the late Sigmund Freud.


The book was well written and I believe most readers will enjoy it very much. Mr. Velikovsky's ideas were a bit extreme for me, though thoroughly engaging and the life of Akhenaton would have been around a thousand years old by the time of Oedipus Rex and the Theban cycle, to which these scandalous events were based, whether historical or unrelated Greek drama.


Mr. Velikovsky succeeded in impressing myself ultimately because of his knowledge and his fluid presentation, and hey you cannot get better actors than Oedipus and Akhnaton!

"None of the discoveries of psychoanalytical research has evoked such embittered contradiction, such furious opposition, and also such entertaining acrobatics of criticism, as this indication of the incestuous impulses of childhood which survive in the unconscious."
Sigmund Freud