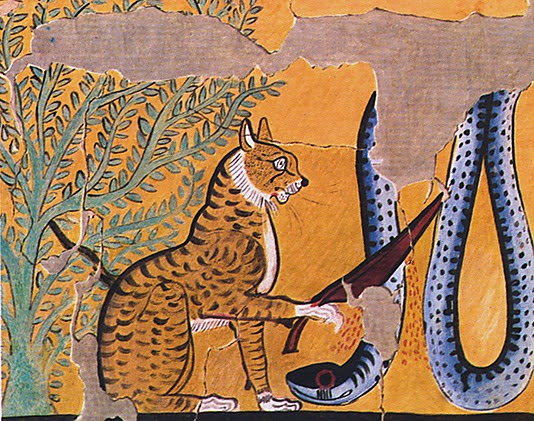 Egyptian Wall Paintings: The Metropolitan Museum of Art's collection of Facsimiles created by its Graphics section.

The bulletins content is on the Graphic section facsimiles of Theban tomb paintings in the museums collection done beginning in the 1907-8 excavation season and displayed in room 135 of the Metropolitan Museum of Art in New York.


The bulletin begins with an introduction by the former Director of the museum, Philippe de Montebello who introduces the reader to Charles K. Wilkinson and to the Metropolitan's facsimiles program which accompanied the museum's excavations in Egypt at the beginning of the last century ending with the excavations in 1936. 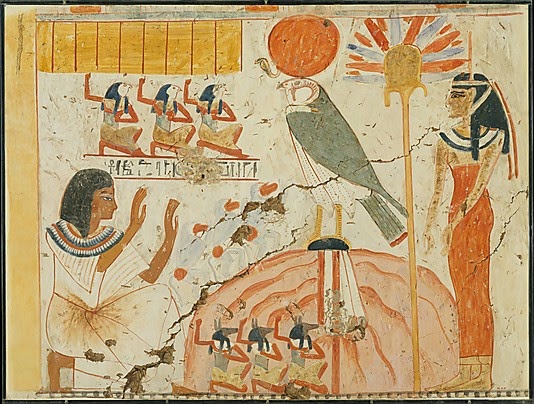 The collection includes 365 facsimiles of mostly Theban tomb paintings including inscriptions. These Theban facsimiles were begun in 1910 when New York received its concession at Thebes and the graphic section of the excavation was at that time headed by Norman de Garis Davies.


In 1920 our author Mr. Wilkinson joined the excavation and relates to the reader his experiences first of all to the environment of Thebes in the 1920's including people living within the tombs. A nice black and white photo shows the tomb of Neferhotep (T 49) being used as a home for a family and their livestock.


Mr. Wilkinson talks about the destruction of the paintings over the centuries starting with the Amarna Heresy moving through the destruction by Coptic monks who used the tombs as homes and places of meditation. The 19th-century habit of destroying the paintings to gain pieces for collectors was mostly thwarted by the closing of the tombs with metal gates. 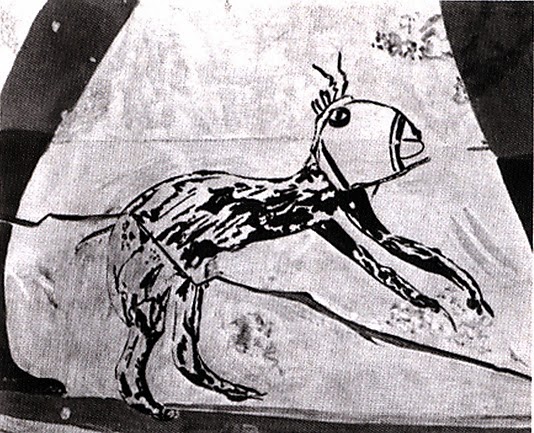 From the middle of the 15th century B.C. in the tomb of Userhat (T 56) is a fine scene of Userhat in his chariot hunting with his chariot being lead by a wonderful red horse. To the right of the image, a Coptic monk 2000 years later has drawn their own version of the red horse which was described by Davies as a triumph of failure.


Invaluable works from early 19th century explorers to the tombs, particularly Sir John Gardiner Wilkinson and Robert Hay who made notes and drawings of tomb decorations and their condition 100 years before the Metropolitan's concession  were helpful in filling in detail missing by the 1920's. The 56-page bulletin is filled with some of the great masterpieces of Pharaonic art represented by the gauche facsimiles produce for posterity by the museums artists.


The layout of the tombs are explored as is the decoration which conforms to certain formalities varying in quality, such as the deceased in front of a table of offerings. The artists doing the copying were each possessive of the tombs they worked in and while a number of very accomplished people copied the wall paintings the finest economy of  hand was perhaps the work of Nina de Garis Davies.

The reader is presented with an interesting black and white photo taken in 1922 in the tomb of Khety (T 311), the tomb decorated in the middle of the 21rst century B.C. The picture of the chamber above the shaft is lined with decorated limestone blocks of offerings and so far back in the tomb that reflectors could not be used to bring light to the space so a pressure lamp was used until it exploded leaving the copying to be done by candlelight.


The magnificent and now destroyed mural from the north palace at Tell el Amarna is beautifully copied and the very point of the graphic section of the Metropolitan's concession. Of the condition of the murals we are told,


"Collapse, rain, and termites had all contributed to the serious deterioration of the wall surface, and the paint remained only as a thin, cracked skin covering cavities made by termites." "Attempts by the society to salvage some small sections might be best described as unfortunate, as the only piece to arrive safely in London was in miserable condition."


Mr. Wilkinson is onto the ceiling decorations which are usually of abstract nature and nearly boundless in design and colors with some exceptions such as the grape trellis decorating the ceiling of one tomb. The usual decorations are explored such as the funeral procession of the tomb owner, or the mourners giving offerings to the deceased.


In one of the finest tombs, the tomb of the sculptor Ipuy (T 217), we are again presented with an image that is mostly gone from the wall it was painted on 3200 years ago, but here is preserved for posterity. 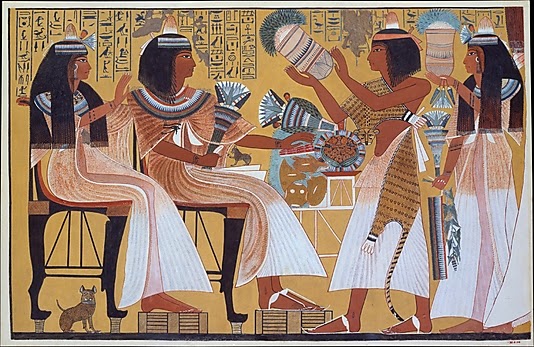 This same scene leads the reader to the authors next presentation in the scenes which are unique to the individual tombs, such as the cat staring out at you from beneath the lady's chair. Among the formula for tomb decoration was the owners occupation and those laborers they controlled, these scenes represent some of the most important works of art for our understanding of occupation and everyday life in ancient Egypt.


The facsimiles now presented to the reader demonstrate the great ability of the ancient artists to create movement among two-dimensional figures. Especially impressive is the nature of the occupation of the ancient artist, and it cannot be ignored that these paintings with their great detail were created without reflectors but by oil lamp.


In the tomb of Tutankhamun's viceroy of Nubia Huy(T 40), we find a tribute scene that may be among the greatest scenes created by the ancient artists of the Theban necropolis, alive with movement and intricacy of design. The author presents knowledge gained from these tombs and the various occupations of craftsmen and the affluent values afforded by their ancient owners.


The volume closes with a painting from the ceiling of a copula in a Coptic tomb in the Kharga oasis which displays early Christian saints and biblical figures one of which holds an ankh the symbol of life, the last vestige of Pharaonic beliefs and the purpose that all these tombs aimed to achieve. Life! 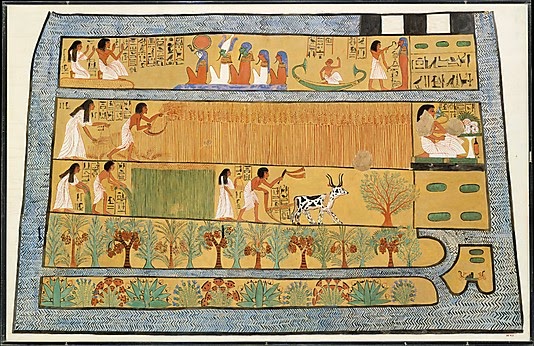 This artwork is currently on display in Gallery 135

3. Ipuy and Wife Receive Offerings from Their Children (substantially restored)

4. Sennedjem and Iineferti in the Fields of Iaru, Tomb of Sennedjem

This artwork is on display in room 135