Challenge of the Great Pyramid 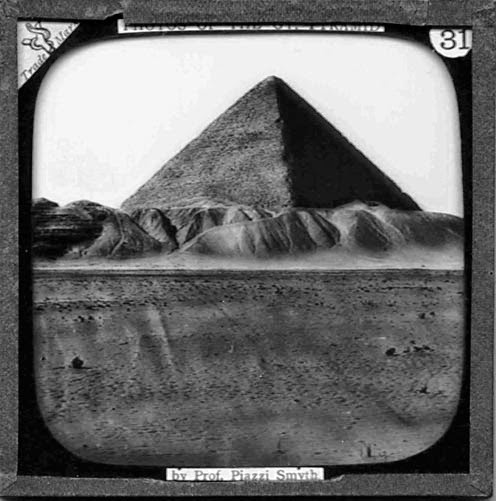 I picked this magazine up maybe a decade ago mainly for this article on the Great Pyramid, pictured on the cover, though the magazine contains other articles including one by former South Carolina Senator Strom Thurman. The very nature of the magazine is Christian salvation and the theory proposed by the author was very popular during the Victorian era and into the 20th century.


The author(?) begins the article with an overview of the subject in question of the great pyramid at Gizeh being its sacred units of measurement layed out within the size, volume, weight, temperature and alignments with the stars and the mass of the earth all set out by god to be read by the Anglo-Saxon-Celtic peoples of modern times. We have recounted the story of the visit by Al Mamoun in the year 825 A.D. with apparently little success.


We are told about the beginning of the theory in the end of the 18th century and the 19th century founding in 1859 with Mr. John Taylor's book "The Great Pyramid: Why Was It Built? and Who Built It?" Mr. Taylor's theories were most famously backed up by Astronomer Royal Piazzi Smyth in his own study of 1864-65 and publication of "Our Inheritance in the Great Pyramid".


"It was never even remotely understood, either by the Egyptian, or any other branch of the Cainite and anti-Israelite family of nations. But that it is able, nevertheless, to explain its grand, even Messianic mission, most unmistakably. Not indeed, in the usual manner of less ancient monuments, by the use of any written language, whether hieroglyphic or vulgar, but by aid of the mathematical and physical science of modern times,"

Next, we pass through proponents of the theory including David Davidson and his work "The Great Pyramid: Its Divine Message". Our author goes into the accuracy of the measurements of such men to prove their points. The author makes no mention of the father of modern archaeology, Sir Flinders Petrie who went to Egypt himself in 1880 to verify family friend Piazzi Smyth's measurements.


We come next to the importance of the pyramids geographical location including a line running east to west through the pyramid's apex terminating at Jerusalem. The structure of the pyramid is next explored including the "pyramid inch" and the origin of the word "pyramid" in Chaldee "Urimmiddin", literally "Revelation measures".


The article also contains three diagrams of the exterior and interior structures of the pyramid including timeline of sacred measurements by god which shows that Christ's crucifixion of 30 A.D. is placed on the timeline of the interior passages at the beginning of the grand gallery leading to the "Kings Chamber" or the "Chamber of the open tomb". In the following parts of mathematics and astronomy the author drags on and on with numbers and measurement that become more and more complex.


This barrage of numbers is this theories best ally as it leaves a mass of scientific numbers so complicated as to leave most lay people including myself far behind. What I did notice was that the authors concept included the age of the pyramid at around 2100 B.C., more than 500 years archaeologically after the pyramid was constructed.


In 1880 Sir Flinders Petrie found that the measurements put forward to testify for the theory by Piazzi Smyth and his proponents were wrong and the theory exposed as a tantalizing fantasy!

The Great Pyramid, Its construction, Symbolism and Chronology, 1931