Secrets of Egypt For The Millions 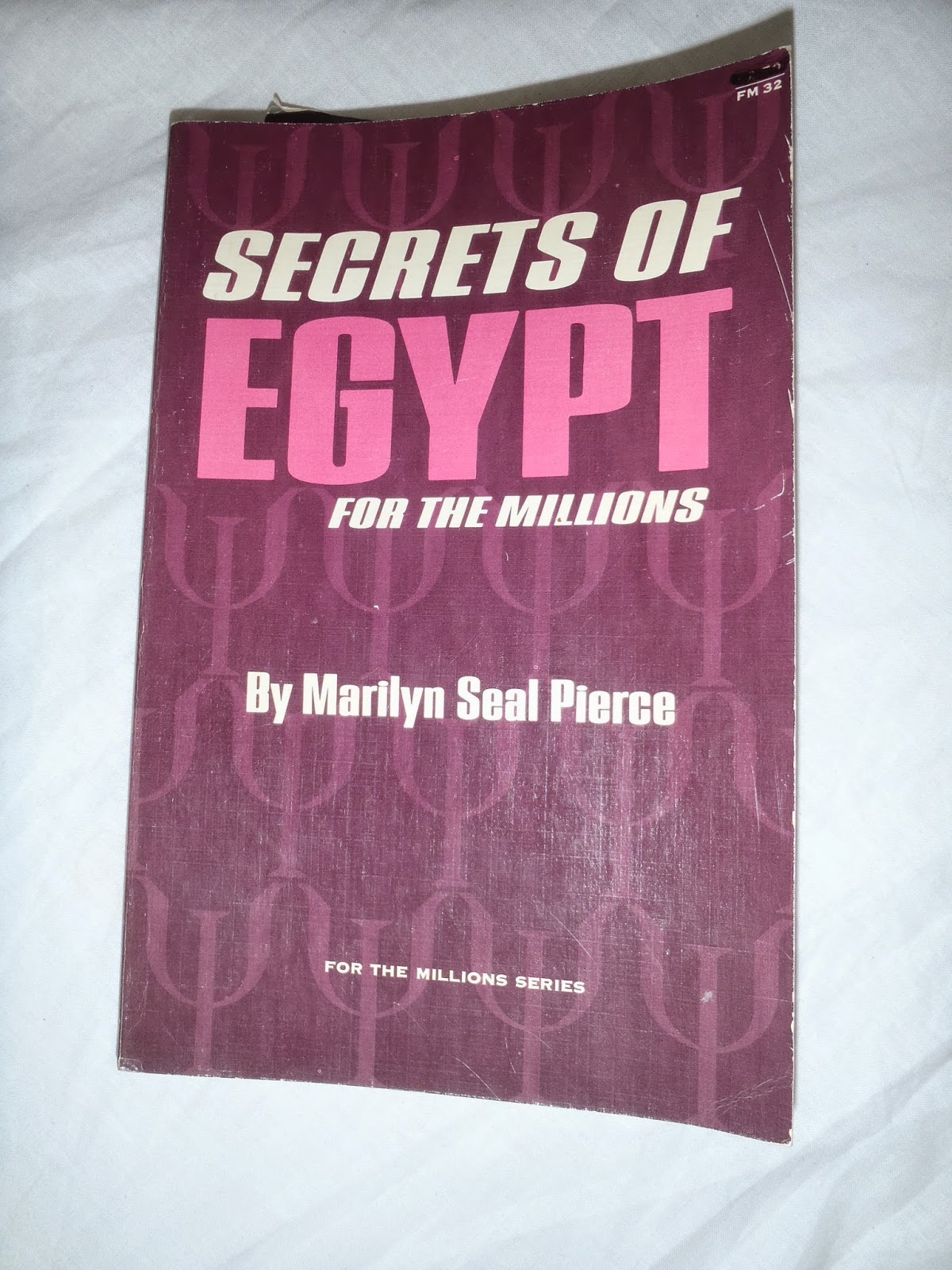 I have to be clear that this paperback on "secrets" kind of made me cringe at its potential content though the book contains no pictures it's most likely telling point comes from the back of the book with a page on other books from this series which included titles such as "ESP for the Millions" and "Dowsing, Divining Rods, and Water witches for the Millions".


The book opens with an overview of Egyptian history including the effects of the Nile on the people of the two very distinct lands of Upper and Lower Egypt leading to unification. The author presents the reader with the realization that the art of mummification was always secondary as without Egypt's dry heat even with the best mummification of the period, the mummies still would have rotted in European soil.


Ms. Pierce presents an admirable and unusual method of demonstrating the separation of Egyptian Dynasties, to which we owe our thanks to the writings of the ancient historian Manetho. Dynasties which were unknown to the kings who had ruled for twenty-five centuries up to the Greek historian, who in turn himself measured a dynasty every time a new family came to the throne with some exceptions.


Our author makes an interesting comparison to Manetho's list with the history of the United States and the example that every time a different party won the presidential office a new dynasty was installed. This means that there were two presidents in the United States 19th Dynasty founded by John F. Kennedy. A concept which is likely as bizarre to the American people as it would have been to the Egyptian of historic time.


The author now turns to Egyptian life and customs of health, enjoyment ,and folly, cleanliness, the food the people ate and the positions held versus obligation with the high priest of Amun, attaining at one point rival status with the king.


Ms. Pierce quotes a number of authors including of note, but then there appears the dreaded "A" word(Atlantis), but only in relation to a theory believed by some and not yet assigned to the authors own.The reader is next on to the "Egyptian religion", a subject which involved every event, every action, everything in existence because of the gods wished it to be.


Herodotus referred to the Egyptian's as the most religious of people in the world with its pantheon of gods, superstitions, and magic. The author explores the most important of these gods including the various attributes and forms that each possessed, and assumed, and often bearing contradiction.


"It is believed that Ptah was a very ancient god because of the fact that statues show him with his legs together and his arms held tightly to the rest of his body. This indicates, experts say, that when he was first represented the sculptors were not advanced enough to show him with separate arms and legs. By the time artists had achieved this skill, his form was fixed and so no changes were made."


Although it was said that this stylized form represented a mummy, making Ptah a god of the dead, primarily Ptah was mentioned as a god of fertility. Ptah was thought to be the source of all creation, the very oldest of all the gods."


Still, Ms. Pierce presents passages from a number of well-known books of the dead which appear to give a fair recording of their original content.


"Oh thou who art in thine egg [i.e.,Ra], who shinest from thy Disk and risest in the horizon, and dost shine like gold above the sky, like unto whom there is none among the gods, who sailest over the pillars of Shu [i.e., in the ether], who givest blasts of fire from thy mouth, [who maketh the two lands bright with thy radiance, deliver] thou the pious Nebseni from the god whose form is hidden, whose eyebrows are like unto the two arms of the Balance on the night of reckoning destruction."


A short chapter follows on the funeral and embalming of an ancient Egyptian with of course the ancient "gossip" Herotodus' account of the three techniques of embalming from most expensive to cheapest. It is the chapter on hieroglyphs and language of the Egyptians that may well be the best in the book, that within a matter of a few pages the author does an amazing job of teaching the reader how to read the hieroglyphs.


The basic hieroglyphic "alphabet" to English translation is present but it is the authors explanations on their connections that are so well explained:


"let us assume that instead of writing English in letters we wrote it in symbols. If this were so, we could use the symbol % to mean "cat." Every time you saw the symbol % you would immediately think "cat." Now, let us assume that the language evolves and, over a period of several hundred years, someone discovers that many words have the same sound as "cat" at their ends; for instance, "rat," "mat," "fat," and so on. Someone concludes that having separate symbols for each of these words is confusing and suggests that the symbol % be used to indicate the sound "at," wherever this might occur in a word. This means that the symbol %, which originally meant only "cat," now becomes part of many words which have nothing whatsoever to do with the word "cat"!"


This is the problem in reading the hieroglyphs that the symbol which is being read as "cat" actually has nothing to do with the meaning of words like "hat," "fat," or even words like "hat(e)" or "fat(e)" would make the reading of our language impossible to anyone who still saw the symbol as "cat. "This was the problem overcome by Champollion's decipherment of the hieroglyphics.


The author now turns to the pyramids, the evolution of, and the building of, including some of the usual remarks made by that town gossip Herotodus. Well, we made it this far without it turning wacky, I guess I hoped for too much, and with that, Ms. Pierce begins with the secrets of levitation according to "the sleeping prophet" Edgar Gayce.


Mr. Gayce believed the great pyramid was moved block by block through "the balancing forces of gravity". The reader is further told that the great pyramid was built as a house of initiation for those who wished to dedicate themselves to the secrets of the mysteries of the Egyptian religion.


"In certain seasons a cosmic fire was lighted on top the Pyramid, for symbolic purpose, by a method known only to the Atlanteans."


As I try to hold back my breakfast the true horror has yet to peak as the book now turns to "Akhnaton and Nefertiti" and into a train wreck as the author begins quoting dubious names and informs us that Princess Bekataten was the product of mom, son, relations and Nefertiti is the long-suffering wife who puts up with her husband's homosexual tendencies. The book ends with a few pages on ancient Egypt's impact on the modern world.


This book has been a roller coaster ride, I realized from the start that it was probably going to be a laughable content but with the exception of the garbage filled chapters 8 and 9, which I would take with a grain of salt, the book had its moments. The authors strong start was perverted by nonsense from men who passed themselves off as sages when the reality was the opposite.


The book is not advised for young readers, but without pictures, I would doubt there would be much interest anyway, and it is not something I would give as a gift to anyone.
Posted by Timothy Reid at 12:32:00 PM