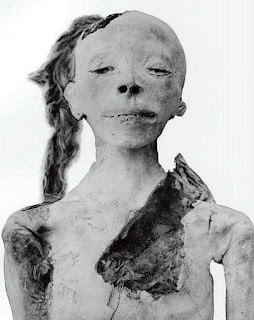 In the recent two-year study of Eighteenth Dynasty royal mummies, it seems that this boy from a side chamber in the Valley of the Kings tomb KV 35 was not included.

There are artifacts from the tomb KV 35 which belong to a son of Amenhotep II named Webensenu as a result of the mummies found in the tomb there are four candidates to be that prince including this boy or another mummy found attached to a funerary boat belonging to Amenhotep II or either of two skeletons.

Some have speculated that the mummy on the boat was the founder of the twentieth dynasty Sethnakht because of a reused coffin once manufactured for that king was present in the tomb at the time of discovery. Unfortunately, the mummy was destroyed more than a hundred years ago when the boat was stolen.

Reports on that badly damaged mummy say that it was glued to the boat by resin used in the mummy's mummification that would mean that the mummy was fairly fresh when unwrapped and thrown on Amenhotep's boat in ancient times.

The founder of the Twentieth Dynasty the pharaoh Sethnakht has been suggested as a candidate dying in approximately 1186 BC would have lain in his tomb or at least a tomb for one hundred years before the recycling of the valley of kings by Herihor and Pinudgem I and others. Is this enough time for the resins on Sethnakht's mummy to have set?

Tutankhamen's mummy was covered in buckets of resin if the same had been true for Sethnakht would a century be enough time to set? I suspect in the dry climate of the valley of kings that this may well be enough time.

Whatever happened the mummy was still gooey enough that when torn open in the tomb of Amenhotep II the mummy stuck to the boat. This seems unlikely scenario to me and I would prefer this mummy to be another person perhaps Prince Webensenu already buried in Amenhotep II's tomb before the reburial committee of the twenty-first dynasty priests arrived.

However, that to me would mean that Kv 35 had probably been robbed by the end of the Eighteenth Dynasty perhaps during the Amarna period with the princes badly damaged mummy thrown on the boat then.

This may remove Sethnakht from ever having been in Kv 35 but he may be represented by one of the unidentified skeletons though I would expect that if Sethnakht was in the tomb that his mummy would have been found in the side chamber with the other New Kingdom pharaohs.

So who's the boy found lying between two Amarna period mummies now identified as queen Tiye and the other woman being Tutankhamen's mother? The naked boy may have done some moving around in Kv 35 as one of his toes was found in another side chamber of the tomb.

The thing that comes to mind is the most important Amarna mummies including Queen Tiye, Tut's mother and the boy may have been moved directly into the tomb of Amenhotep II at the return from Amarna to the valley of kings minus their burial goods.

The unwanted storeroom Kv 55 used to hold Amenhotep III and queen Tiye's burial equipment during the building of Wv 22 and now basically empty was used to dispose of the unwanted mummy of Akhenaten(?) and queen Tiye's offending shrine. Queen Tiye, the younger women and the boy being placed reverently in the tomb of their great ancestor during the reign of Tutankhamen and robbed shortly after perhaps at the same time the mummy was thrown on the boat.

If the mummy on the boat is Webensenu than the priests who opened the tomb at the beginning of the Twenty-First Dynasty probably found a tomb already plundered and merely gathered up the three naked mummies placing them next to each other in the side chamber and adding the kingly mummies.

In the tomb of Tutankhamen, we find a number of objects made for some other king and potentially reinscribed for Tutankhamen with the titles on the canopic coffins hinting that the king may have been the ephemeral Smenkhara.

I am tempted to wonder if the boy found in the tomb of Amenhotep II laid to rest with Tutankhamen's mother and grandmother could be Tutankhamen's older brother, the pharaoh Smenkhara?

Is there anything to support this idea? In G. Elliot Smith's sensational 1912 book "The Royal Mummies" Sir Smith says the following of the mummy "is a small boy (1 m. 242 mill.) Whose general appearance is suggestive of an age of about nine or ten years: but as permanent canine teeth are present and fully grown he cannot be less than eleven years of age".

This would mean that if the boy was Smenkhara he probably ascended the throne at about the same age as his successor Tutankhamen suggesting the idea that there were back to back boy kings after Akhenaten.

Ironically Sir Smith goes on to say "This boy presents an extraordinary likeness to a beautiful statue of the God Khonsu found at Karnak". A statue believed to represent Tutankhamen as the moon god but which may have been created for the boy in KV 35.

Certainly, the next question must be the position of the boy's arms not being crossed over his chest as might be expected of a king's mummy at this period. The reports on the investigation (in the tomb) of the KV 55 mummy are vague sadly but do indicate that the mummy found there had at least one of its arms at its side.

J. Lindon Smith and Edward Aryton described the position of the KV 55 mummies arms as the right arm fully extended along side of the body with the left arm bent and the hand resting on the chest, however, Theodore Davis saw the hands as clasped.*

The traditional Osirine pose appears to have been abandoned for the Kv 55 mummy if it is actually a king in favor of a more feminine pose which would perhaps be appropriate for Akhenaten but not for the boy in KV 35 who may have been simply denied the burial pose of a king at the embalmers around or slightly after the death of Akhenaten himself.

With all these scenarios the truth is science in the future will more than likely be able to show the familial relations of the boy to the other royal mummies but doubtful that a name can ever be attached to this boy much less the name Smenkhara.

The funeral bier of prince Thutmose shows him as a high priest of Ptah at Memphis. The figure has a wig and a sidelock. In this case the sidelock does not indicate youth, it is a symbol of Ptah. So, why does this figure have a wig if not an adult, and the KV35 prince is certainly not an adult. All artifacts, his cat's sarcohagus etc, associated with crown prince Thutmose come, I believe, from around Memphis, not Thebes. I think he may be a so far undocumented brother of Tutankhamun. When SCA eventually release his DNA and scan results, we will know if this is so or not. Why don't they release these results?. Going against my own idea though, is the position of his hands, right extended, left closed, the same as the mummy of the boy in KV43 who is believed to be crown prince Amenemhat. Is this hand position normal for a crown prince, or just any prince? With only two examples of juvenile princes, I think, how can we ever know.