When the Pyramids were Built 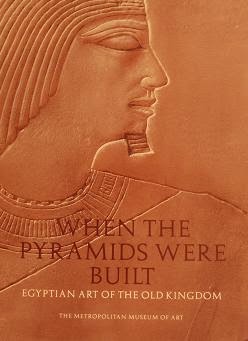 This lovely book was in conjunction with the exhibition of the same name.


The photographs by Bruce White are wonderful images of so many Old Kingdom objects I have never seen before and a few old favorites as well. I confess from the start that the art of this period really does it for me especially by when the book lets the large often full page images do the talking.


The book is nicely divided into individual dynasties of the Old Kingdom starting with the 3rd Dynasty with perhaps most remarkable is the doorjamb of King Djoser, Egyptian museum (JE 98951a,b). Though the faience tiles from Djoser's funerary apartments have a great simplicity in their beauty.


The crossing of the dynasties into the 4th Dynasty the reader is presented with so many brilliant pieces including the paste filled relief from the tomb of Itet at Meidum. Ny Carlsberg Glyptotek, Copenhagen (AEIN 1133 A). The rare slab stela of Prince Wep-em-nefret from the Phoebe Apperson Hearst Museum of Anthropology, University of California at Berkeley (6-19825) is one of the great masterpieces of the about fifteen examples known to exist.


A beautiful juxtaposition of photographs in the book has the famous head of King Djedefre from the Louvre, Paris (E 12626) facing on the opposite page the small head of a king from the collection of Nanette B. Kelekian, New York complete with its heavily corroded eye inlays.


The art of the 5th Dynasty presented in the exhibition included the famous colossal head of King Userkaf, Egyptian museum, Cairo (JE 52501) but also noteworthy is the exquisite statue of Kai seated found by Auguste Mariette in 1850 and now in the Louvre, Paris (N117 [=E 3024=A 106]).


This well-written book is a visual joy and though I would have preferred a little more background on the works of art picked for the exhibition the pieces chosen made truly an extraordinary collection that will leave me looking through this book for years to come.

Here is a Charlie Rose interview with Dorothea Arnold and Philippe de Montebello on the exhibition October 29, 1999.
Posted by Timothy Reid at 2:00:00 PM