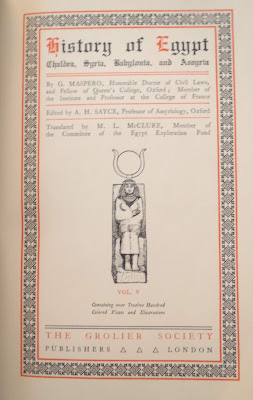 
I have had this series of 114-year-old books for many years but never read them. The author Gaston Maspero was the head of Egypt's Egyptian Museum and in charge of giving excavation permits in the late 19th century early 20th century. Mr. Maspero was chief Egyptologist and expert archaeologist of Oriental history. It must be noted that the use of and spelling of English words from 1904 differs from today's vocabulary. It must further be noted that interpretations of Egyptian hieroglyphs particularly names have also changed over the past century.

The book opens late in the reign of Thutmosis III and the empire established by his predecessors being expanded by King Thutmosis. The king's mummy is represented in now-familiar photographs though the author believes the king's burial was at Deir el Bahri in a family vault. Gaston Maspero quickly passes through the reigns of Amenhotep II and Thutmosis IV delving in more depth with Amenhotep III and the many monuments left to the posterity of this ruler. The Amarna correspondence opens the nature of the vassal lords who write to the king greedily seeking greater and greater gifts to the point of exhaustion.

Interesting in reading an old book is, in this case, Mr. Maspero as of writing is unaware of the burial places of the kings of dynasty 18 though he is aware of the tomb of Amenhotep III in the Valley of the Kings. The author moves through the few identifiable relics of Amenhotep IV and the uncertainty of whether this Amenhotep and Akhenaton are the same king or if Amenhotep IV is a short reigning predecessor of the heretic king. We are presented with the rise of the sun disk and the destruction of the traditional Theban deity Amon.

"After having been for nearly two centuries almost the national head of Africa, Amon was degraded by a single blow to the secondary rank and languishing existence in which he had lived before the expulsion of the Hyksos. He had surrendered his sceptre as king of heaven and earth, not to any of his rivals who in old times had enjoyed the highest rank, but to an individual of a lower order, a sort of demigod, while he himself had thus become merely a local deity confined to the corner of the Said in which he had had his origin. There was not even left to him the peaceful possessions of this restricted domain, for he was obliged to act as host to the enemy that had deposed him: the temple of Atonu was erected at the door of his own sanctuary, and without leaving their courts the priests of Amon could hear at the hours of worship the chants intoned by hundreds of heretics in the temple of the disk."

The author puts forward life at Akhetaton with a rather romantic view of this king and his court while his empire receded. Mr. Maspero is unimpressed with the king's crude tomb at the bottom of a ravine far off in the desert. As the story passes the heretic pharaoh and the royal actors including Tutankhamun become murky until the dynasty closes with the Pharaoh Horemheb. 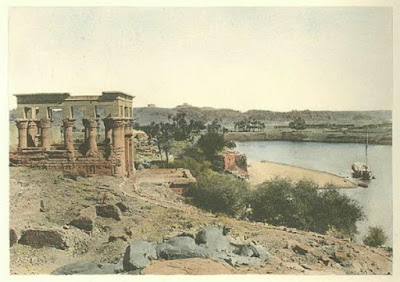 The coronation of Ramses I founded the 19th Dynasty and brought a new family to the throne and with his son and heir Seti I order was restored to Egypt after the heresies that brought an end to the previous dynasty. Mr. Maspero puts forth King Seti's building works which contain some of the finest reliefs ever placed on the walls of an Egyptian temple and in his tomb in the Valley of the Kings.

The successful reign of King Seti I reestablished Egyptian foreign stability that would be completed by his successor the great King Ramesses II in a peace treaty with the Hittites. Ramesses II's very long reign was, for the most part, peaceful leaving the king to build new temples all over the country including the restoration opportunities to engrave his name everywhere he could. War rises up again and is successfully put down during the reign of the great king's elderly successor Merneptah. The short reign of Merneptah left behind a succession crisis involving a number of short reigning descendants until only two decades after the great Ramesses II his dynasty came to an end being replaced by a dynasty of kings almost all of which were named after him.

The accession of Ramesses III brought to the throne the last great emperor of ancient Egypt's New Kingdom. The king's military victories brought a peace as it had his great predecessor Ramesses II a century earlier. These conquests he had his artisans engrave on the walls of his mortuary temple at Medinat-Habu. As the pharaoh grew older a conspiracy developed in the king's harem as one of his lesser wives hoped to place her son on the throne though not the legitimate heir. Magical figures were prepared and sacred spells are spoken but the conspirators had an informant amongst their lot. A trial occurred at the end of which six women and forty men were put to death. Of the intended usurper prince Mr. Maspero says,

"They died of themselves," and the meaning of this phrase is indicated, I believe, by the appearance of one of the mummies disinterred at Deir el Bahari. The coffin in which it was placed was very plain, painted white and without inscription; the customary removal of entrails had not been effected. but the body was covered with a thick layer of natron, which was applied even to the skin itself and secured by wrappings. It makes one's flesh creep to look at it: The hands and feet are tied by strong bands, and are curled up as if under an intolerable pain; the abdomen is drawn up, the stomach projects like a ball, the chest is contracted, the head is thrown back, the face is contorted in a hideous grimace, the retracted lips expose the teeth, and the mouth is open as if to give utterance to a last despairing cry. The conviction is borne in upon us that the man was invested while still alive with the wrappings of the dead."2

With the death of Ramesses III, his successors all named Ramesses had short reigns and produced few monuments outside their tombs in the Valley of the Kings. Mr. Maspero gives an overview of the arts of the Theban empire with high praise for the jewelry of Queen Ahhotep in relation to the masterpieces in royal jewelry from the Middle Empire.

Though published in 1904 the volume was a little out of date and likely written somewhere after the 1896 discovery by Flinders Petrie of the Merneptah Stelae and before the discovery of the tomb of Amenhotep II in March of 1898 of which the author is unaware. This book is for readers 18 and up, however, I doubt that it would have appeal to most readers even those interested in ancient Egypt. The antique charm I suspected did not come to fruition instead the out of date archaeology mixed with the out of date hieroglyphic translations of names removed all impact of the author's words.