The Great Lopsided Pyramid of Giza 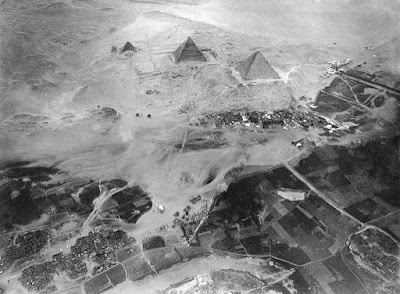 The Ancient Egypt Research Associates recently took measurements of the Great Pyramid on the Giza Plateau. The pyramid was built for the tyrannical King Khufu around 2560 BC and is the only surviving wonder of the ancient world.

In a report by archaeologist Glen Dash the survey found that the west side of the pyramid was off in comparison with the east face. The search continues to discover how the great pyramid was built in such a remote period of ancient history and with only the simplest of tools.

Arial photograph by Eduard Spelterini from a balloon November 21, 1904
Posted by Timothy Reid at 1:52:00 PM No comments:

Another Skull from Valley of the Kings tomb KV55 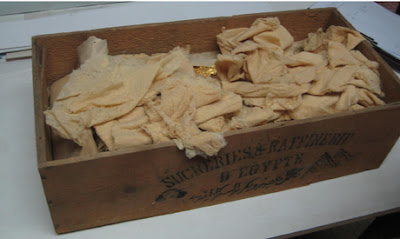 This is a short article to announce funding for a study of hundreds of gold sheets found in this box in the storage of the Cairo Museum. The contents originally were found in Egypt's Valley of the Kings controversial tomb KV55. More remarkable are a couple of fragments of someone's skull which are attributable to that burial even though the skeleton found in that tombs coffin is not missing parts of its skull.

So who is this? Could these two fragments actually be the remains of Akhenaten instead of the mummy found in the coffin of that tomb? Or could they be all that remains of the ephemeral Pharaoh Smenkhara? The pieces could also be of a later intrusive material, whether in the tomb or while in museum storage.

This study has some real potential to add to the knowledge of the reign of the heretic king and the Amarna period king's that followed him from the 14th century BC.