Experts in Manchester examining a wrapped Egyptian mummy have found bones which along with linen have been stuffed inside the mummies skull. The lady in question is from the late period and well mummified, a package on her thighs is believed to be her internal organs.

When the examinations are done the lady will be placed on display in Ipswich museums new Egyptian gallery.
Posted by Timothy Reid at 10:19:00 AM No comments:

The Showman and the Archaeologist


The recent presentation by Caroline Simpson of the state of archaeology in Egypt has taken back a number of people though many realized the fate of the Qurna village was sealed a number of years ago but there was, however, a true belief that at least a few of the most historic buildings would stay, not to be and in came the bulldozers.

Some are pleased by the loss as the village did represent itself as a den of thieves that has supplied museums around the world with huge quantities of antiquities though larger than this all villages contain the good the bad and the ugly. Over the decades Egyptian laws have changed making the traditional work of the Qurnawi searching for artifacts to sell harder.

As laws played their part the number of quality artifacts coming from the tombs of the nobles diminished, though some gold jewelry was found in recent years. This is the exception no longer the rule and the life's work of the Qurnawi had to change now that the resource has dwindled and the opportunity to sell antiquities forbidden.

The village may have in some minds been a leftover remnant of Egypt's colonial period and this may have been ultimately what sealed Qurna's fate.

The avenue of sphinxes would be a joke if it was not so historically tragic and again the bulldozers these being the archaeological practices of Dr. Zahi Hawass and his Minister Farouk Hosni. The rubble that represents the remains of the avenue is perhaps a fitting find for Egypt's Ministry of Culture and its Supreme Council of Antiquities who are trying to recreate the ancient history of the site.

In the end the concern that a decade or so from know when Minister Hosni and Dr. Hawass have finished their duties to the Egyptian state that many archaeological sites including the avenue may be irretrievably ruined by their actions. Certainly, that decade has passed for Qurna!

In the summer issue of KMT, volume 21 Number 2 Summer 2010, the Editorial Director Dennis C. Forbes published an article, "So, What's become of the golden cartouche?" The short article is based on the gold foil coming from the interior lid and basin of the coffin found in Valley of the Kings tomb Kv 55 and whether there is an intact cartouche on the foil of the basin.

Egyptologist Georges Daressy working on behalf of the Cairo museum examined the foils when they came to the museum in 1907 and made some sketches. The foils reportedly have a line of inscription running down the center of the foil from top to bottom of the coffins basin and lid. Unlike the lid inscription the cartouche on the basin inscription is reported to be present and that the cartouche is of Smenkhkare.

Unfortunately, the recent DNA examinations of the royal mummies related to king Tutankhamen have left many people believing that the mummy found in the coffin is that of Akhenaten, particularly at the head of Egypt's Supreme council of antiquities.

With so much of Smenkhkare's burial equipment in Tutankhamen's tomb just across the path from Kv 55 and the ownership of the Kv 55 coffin being same it should not be a surprise that the mummy of Smenkhkare should be present also!

Having said that in ancient time the short-lived Pharaoh Smenkhkare had been robbed of much of his burial equipment for Tutankhamen's burial and the Kv55 coffin may just be another example of that robbery only the recipient being a different person?

The summer issue of Kmt is particularly interesting and a must get.
Posted by Timothy Reid at 12:16:00 PM No comments:

Mexican archaeologists are set to return to Theban tomb 39 for a sixth season with the hopes of it being open to the public in the next few years. The focus in September is for the archaeological team to remove six tons of debris that had filled the tomb from hill runoff.
Posted by Timothy Reid at 4:05:00 PM 1 comment:

Egypt Under the Pharaohs 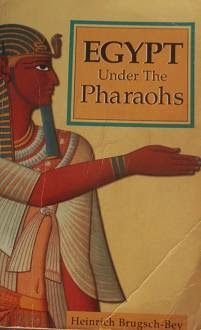 This reprint of the 1902 book by Heinrich Brugsh-Bey opens with a basic map of Egypt and a less than an adequate list of illustrations which are mostly infrequent small photographs and sketches. This is followed by a table of the principal kings names surrounded by cartouches which I found particularly interesting by the presence of cartouches around the Thinite kings names.


I realized from the start that a copy of a one hundred and an eight-year-old book was going to have many inaccuracies but this was the work of the very famous nineteenth-century Egyptologist Heinrich Brugsh-Bey. Many of the names of the kings and place names will certainly confuse the average reader as Mr. Brugsh-Bey's rendering of hieroglyphs has become reinterpreted by scholars who have followed and who's readings are accepted today .


One of the things I loved about this book was the table of the pedigree of the chief architects and the genealogical tables that follow. Mr. Brugsh-Bey tells that at the end of the VIth Dynasty c.3060 bc a queen named Nitocris altered the pyramid of Men-kau-Ra, the author says "altered it, left the body of Men-kau-Ra in the lower chamber, and placed her own in the blue basalt sarcophagus contained in the upper one."


I did like that the author presents each ruler's names at the start of their biographies and the list of kings of the thirteenth dynasty according to the Turin papyrus is outstanding. Egypt under the Pharaohs so far is not likely appropriate for the young or those who have a passing interest in the subject but due to the authors importance I persist.


The Second Intermediate Period as expected is particularly confusing with the domination of the Hyksos kings and the rise of the VXIIth Dynasty. To the courts of the Hyksos the author believes belongs the biblical figure of Joseph, not an unreasonable though unproved deduction.


Mr. Brugsh-Bey was clearly a man at the center of nineteenth-century Egyptology and as such approaches his study with a scientific view of the monuments. I really love all the cartouches that head the chapters including their phonetic values.


By chapter seven the author has taken us out of the Second Intermediate Period and into the New Kingdom. By now the amazing discoveries that have come since the writing of this book have really come to light as the author lays out his study.


Mr. Brugsh-Bey now follows the monuments and their inscriptions including the numerous than known monuments of the "Warrior Pharaoh" Tehuti-mes III or at least those inscriptions which are relevant to the authors point. The author discusses the inscription from one of the few surviving blocks from the beautiful little temple on the island of Elephantine which Napoleon's savants had drawn so carefully but that sadly the Governor of Aswan had the temple destroyed in 1822.


The author discusses the Karnak Kings list which has Tehuti-mes III claiming his descent back to King Sneferu including the Middle Kingdom rulers and thirty kings of the XIII Dynasty. As the author traces the monuments he comes to the heretic Pharaoh Khu-n-aten of whom the author is aware of the tombs in the cliffs of Tell-el-Amarna but only a couple of the boundary stones beside this much of what the author says is hopelessly out of date.


The author provides a single sentence to describe Khu-n-aten's successor Saa-Nekht while the reigns of Tut-ankh-Amen and Ai make up a short five pages of this four hundred and sixty-nine page book. Once again the next dynasty, the XIX Dynasty starts with a wonderful genealogical table.


The author who believes that Seti I was first buried in his temple at Abydos and later moved to Thebes says of Rameses II "The feeling also of gratitude towards his parents seems to have gradually faded away, as years increased upon him, to such a degree that he did not even deem it wrong to chisel out the names and memorials of his father in many places of the temple walls, and substitute his own."


The author goes on to say of the Ramesseum "Here stood also the largest statues of the king, which, according to tradition, Cambyses threw down when he visited Thebes." With a translation of an inscription of Ra-messu XIII so ends the New Kingdom.


I was thrilled at this point to realize that the next section was on the royal mummies of Deir-el-Bahari especially since I had noticed all mention absent from the earlier biographies of the New Kingdom pharaohs. Thrill soon turned to disappointment as the author breezed through the descriptive in a couple of pages with a footnote on the 1891 discovery of the priests of Amen cache of which the author says.


"Some of the sarcophagi bore the date of the XI Dynasty, and it was hoped for a few hours fondly hoped that the explorers might have come upon an unbroken sequence of high-priests from that period onwards." From here Mr. Brugsh-Bey turns to Her-hor and the XXI Dynasty of Thebes and the kings of Zoan-Tanis.


As the Third Intermediate Period advances the monuments become more and more silent and the role of the king more provincial. The book ends with some supplementary notes by M. Broderick on the last dynasties and their kings.


To close the book a series of interesting tables follow including on Egyptian nomes, calendar and a list of values. "Egypt under the Pharaohs" was perhaps a must read for the really serious Egyptologists but a book that will be too difficult and not recommended for the average reader.
Posted by Timothy Reid at 8:00:00 PM No comments:

Napoleon before the Sphinx 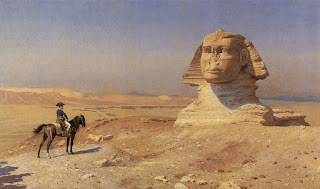 The exhibition of Cleopatra at the Franklin institute museum begins today and this is a nice article with a number of fine pictures of objects many recently found.
Posted by Timothy Reid at 6:59:00 PM No comments:

The Search for Mount Sinai

Archaeologists Professor Emmanuel Anati believes he has discovered the true mount where Moses received the ten commandments from God. Mount Sinai in the Egyptian Sinai peninsula has long been thought of as the place but Professor Anati through his excavations believes the correct mount is in Israel's Negev desert at a mount known as Har Karkom.

Professor Anati has had meetings with members of the Vatican and believes that they are in agreement with him and set to arrange pilgrimages to the site. Anati discovered at Har Karkom more than a thousand finds including sanctuaries, rock paintings, altars and a tablet that resembled the ten commandments.

Anati also believes the date of the biblical Exodus from Egypt should be a thousand years earlier around 2200 and 2000 bc than what is currently thought.